Mike Stoops Was One Black Cat

Share All sharing options for: Mike Stoops Was One Black Cat

We're all familiar with Alfred's quote to Batman in The Dark Knight about people watching the world burn, and how the Joker epitomized it. At first glance, you'd think recently disposed Arizona head coach Mike Stoops seems like the typical person to fit that philosophy ...

Uh, wait a minute, back up there, you with your trivial pop thesis there. 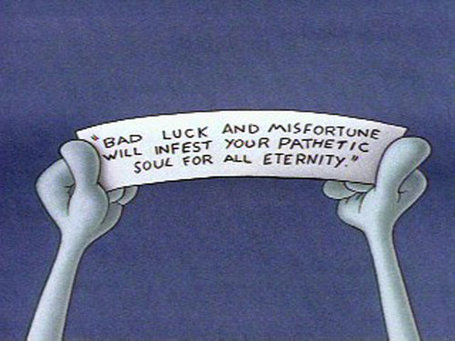 Mike Stoops will always live in the shadow of his older brother, and that's kind of a football tragedy in its own. It can't be easy to always be compared to Bob, who pounds out ten wins a season in Norman, while Mike has to trod his own way in little Tucson as one of the least relevant FBS football schools out there. Always looking up, always chasing from behind. As he had to when he got here.

Mike Stoops beat eight ranked teams with mainly bad teams, then proceeded to lose to twelve teams with losing records, even when his teams were good. In many ways, Mike Stoops's team epitomized the college football experience. Upset someone, get upset. It was a way of life.

Mike Stoops's Wildcats went 3-8 in 2005 for the second straight year. But near the end of the season they proceeded to dismantle an undefeated 9-0 UCLA Bruins squad with an unfathomable 52-14 result, which to this date is perhaps the most peculiar Pac-10 game ever played. Dreams of a BCS bowl were ruined for the Bruins, and the beginning of a long, slow decline for UCLA football since.

The same thing happened the next year, as they managed to ruin Rose Bowl hopes for the red hot 8-1 California Golden Bears. It as more like a Murphy's Law game for Cal, but that seemed to be the rule of the land when it came to Stoops football--bad things happen when you play them.

And of course, the ultimate horror came in 2007, when Dennis Dixon's leg tumbled around in Tucson. Arizona detonated Pac-10 championship hopes that night, and they didn't even have to do anything. Stoops was a harbinger of misery. It seemed that in those early years, Stoops needed one more game to survive his job, and he did. Mike Stoops was like the dude in sales who played loads of paper football until 4:30 PM, then somehow nailed a Fortune 500 client with thirty seconds to spare. Infuriating, painful, and the cycle went on another year.

After that, a different Stoops seemed to emerge. Sonny Dykes and a senior Willie Tuitama (followed by a young Nick Foles) helped power Arizona's Airraid attack to record numbers, and suddenly Arizona was beating teams good and bad. Getting to bowl games. Suddenly their team was fun again.

But Dykes left, players started graduating, and Stoops had to rebuild. Stoops isn't so good with the whole rebuilding thing. You know, because of the whole "everything burning around him" theme. Back he went to his yelling ways, verbally chewing out whoever he felt did something wrong, which on this long and epic losing streak was pretty much everyone. Go back through the tape of the last four or five losses and you'll wonder who was spared.

Eventually he had no one else to yell at but himself. And that was the end of that.

You couldn't find two more disparate figures than Mike Stoops and Mike Riley in terms of their temperament and personality. Yet in many ways, their profile is the same. Both have taken nowhere places like Tucson and Corvallis and eventually churned out successful football teams with distinct offensive systems and without high-profile recruits. Both might not survive this season.

It's doubtful the conference will miss Stoops.  His uncontrollable sideline tantrums were a source of constant entertainment to football fans, but it had to grate the Pac-12 that this was one of the faces of their football federation. And Arizona fans probably enjoyed the occasional rushing of the field, but they never managed to get all the way and lock down their place among the top in the conference.

Less than two years ago, Arizona was minutes away from sealing up a potential conference title. The sea of red was ready to engulf the field, the students were about to turn Tucson into the world's largest bar, and Stoops would have finally proved that he could do it.

Then Jeremiah Masoli kept throwing and running, and Dickson caught that pass with six seconds left, and Masoli punched things in...

It was always that way with Stoops. Almost there, then not there at all. Just bad luck, you'd say.