Brock Osweiler is the perfect quarterback for Noel Mazzone's spread/Airraid hybrid offense for the Arizona St. Sun Devils. Osweiler isn't a gifted athlete and won't be making many adjustments, but at 6'8" he can survey defenses and make quick decisions from shotgun to hit all the right spots, particularly when defenses are playing back and conceding areas of the field. Osweiler makes good reads of the defense and knows exactly where to go with the ball.

You'll see one such instance of Osweiler reading and making the right decision to keep an Arizona State drive going against Utah.

Osweiler will survey and make a decision based on what he sees from the Utah coverage. 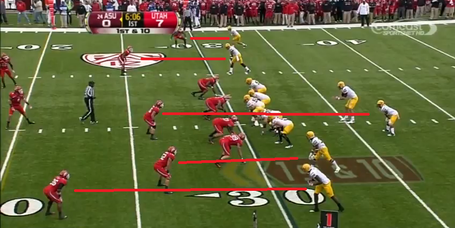 At first glance, it looks as if the Utes might be in a Cover 2 package. The safeties are playing deep, while all the linebackers/cornerbacks appear to have a man covered and assigned to them. They linebackers will either play their zones, drop back and give the ASU underneath throw, or they will play.

Indeed, you'll see after the jump that the linebackers and cornerbacks drop back.

But notice also that the Utah safety isn't dropping back, but rushing in to coverage.

My guess is that Utah knows Osweiler isn't as accurate the further down the field he goes, so they're willing to dare him to throw deep or force him to throw into tight spaces. On this play, Osweiler proves he can do the latter.

First look at how Osweiler goes to his first read streaking down the left side, probably to draw the deep safety on that side of the field (although we can't tell if the safety bites in the images, video near the end of the play has the safety on the periphery of the screen, making me think that he did indeed react toward Osweiler's first look and played the left receiver down the sideline.

When he sees the linebacker going back and the safety turning toward one side of the field, he immediately turns his attention to the strongside of the field, where he has multiple options to choose from in one-on-one coverage. The best route for him to beat the coverage is probably the in route down the middle, since the safety is likely to tackle the underneath receiver and the post route is tightly guarded by the defender.

Osweiler probably sees the other safety coming in to cover the underneath route. Osweiler shows his maturity by waiting for the safety to come inside just enough, then threading it right behind him and to the retreating linebacker to nail his receiver Gerell Robinson in stride.

You can watch Osweiler's play by going to 2:07 of the video below.

You'll actually see another good job by Osweiler reading the defense on the 3rd and 2 touchdown throw to Jamal Miles. When Osweiler saw that Utah was planning to blitz and had only one lone defensive back in the end zone shading toward the running back on the left side, Osweiler went toward the trips side and a hot read coming inside to take advantage of the vacated middle of the defense. Watch it here or move to 3:41 in the video above and you'll see a perfect throw mad into serious pressure.

ASU's offense has been getting very good at what it does, and it all starts with Osweiler's ability to read the defense and figure out where to go with the ball pre-snap and in the pocket.