Share All sharing options for: UCLA Vs. USC: Bruins Go All-White Uniforms For The Wrong Game

The UCLA Bruins are revealing a new look for their rivalry game. Athletic Director Dan Guerrero sent an email around to the Bruins fans, who had to be thrilled (or the opposite of it) with this news.

There have been rampant rumors out there recently that our football team might be sporting a special look when they take the field for the USC game on Saturday evening. I can confirm that those rumors are indeed true. We will be unveiling a uniform that we have been working on with the adidas design team for several months. These new uniforms will provide us with an alternative to our existing road uniforms but will not replace them in perpetuity. That said, I’m not going to tell you everything in this blog – but look for hints the remainder of the week by liking UCLA Athletics on Facebook or following @UCLAAthletics on Twitter

Instead of the usual powder blues the Bruins have been sporting lately with their home colors displayed at every USC rivalry game, UCLA is going stormtrooper. It will probably look something like this. 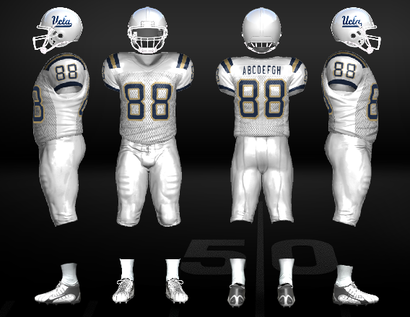 (HT jtthirtyfour of Bruins Nation for creating this potential mock-up).

I mean, there's nothing wrong with these uniforms. They're pretty nice looking and they have a bit of polish, and look similar to the all-white duds Cal sported a couple of times this season.

The biggest question is why do this now? Why do this against USC, your traditional rival? Why deprive your fanbase of cool images like the photo above, where the blood red of the Trojans contrasts with the baby blues of the Bruins? Why upset fans when you already have precious little pockets of support within the fanbase for putting out an inconsistent football product on the field? Why look like you're taking an idea that your sister school spooled out a few weeks ago and adopt it as your own?

It's very odd, just like a lot of odd things that have happened lately at UCLA. A lot of people are confused by this, including the USC staff. Rick Neuheisel really stumped for the blue vs. red look, and neither he nor the players were well-informed about this decision. Here's what Tony Dye is saying.

"Those equipment people won't budge for anybody," he said. "It's kind of frustrating because I'm a captain and they wouldn't tell me, but I'm praying and hoping it's all-white. But that's me just guessing. ... You know I've been pushing for all this, but I gave up on all that at the beginning of the season."

Stuff like this makes you wonder if Neuheisel is pretty much on his last legs in Westwood, and the AD has already decided to move in a new direction. .

The Bruins need to hope the product on the field isn't as unpalatable as the look they sport to go with it.