The UCLA Bruins are going to play in the Pac-12 championship game next week. But the USC Trojans left no doubt Saturday night that they were the ones who deserved to be there.

This photo says all that needs to be said. 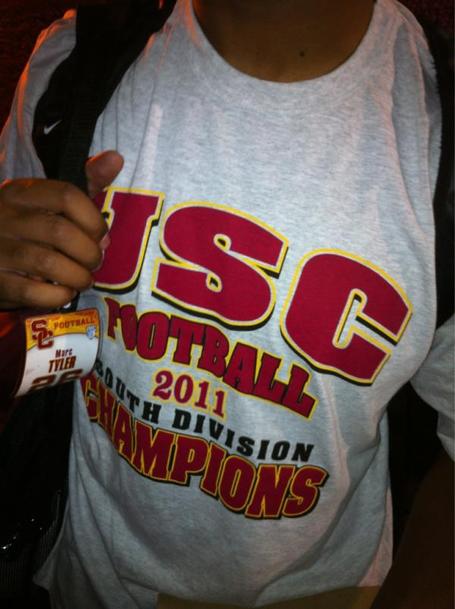 (Thanks to Michael Lev for the photo).

@InsideUSC
InsideUSC Marc Tyler: "I wish the next (UCLA) coach a lot of success.''
Nov 27 via Twitter for AndroidFavoriteRetweetReply

@maxpuro
Max Puro Matt Barkley to Petros: "We heard that someone was trying to close the gap, so we tried to not let that happen." #usc runs LA for another yr
Nov 27 via webFavoriteRetweetReply

@InsideUSC
InsideUSC `The gap was really close. You can tell by the score,'' USC offensive tackle Matt Kalil
Nov 27 via webFavoriteRetweetReply

USC pounded their archrivals Saturday night in the Coliseum in a contest that made it look like there was only one football team on the field. Matt Barkley might as well have been playing seven-on-seven touch football the way he was stepping back in the pocket and shredding a UCLA defense that seemed to have no idea how to defend him, Marqise Lee or Robert Woods. Lane Kiffin and Barkley combined for another masterpiece as the offense moved methodically and unleashed the big plays. USC stopped every threat by the Bruins with their rising defense, which drove the field but produced no points and couldn't pick up the crucial conversions.

UCLA had a great chance to prove they were worthy Pac-12 South champions. Beat USC and they would at least win the conference legitimately. Rick Neuheisel had a chance to show that his team was ready to respond and do battle with the top teams. Show up their rivals after their big win in Oregon and prove they deserved some respect rather than revulsion.

Nothing of the sort happened. It was confirmation of all we knew, an utter acceptance of Bruins football in its most mediocre incarnation yet.

In fact, if you love football, you have to feel just as sorry for USC as you do UCLA. These current Trojans are paying for the misdeeds of Trojans past, and they will not get the chance to showcase their talents in a BCS at-large bowl or any big game of any sort. This offense is wheeling and dealing, and the defense is much improved. Matt Barkley won't get his chance to really cap off his career with a signature win unless he takes an awful risk and decides to come back for one last big go-around. It's unfair in the many, many ways college football can be unfair.