Andrew Luck Vs. The USC Defense

Share All sharing options for: Andrew Luck Vs. The USC Defense

Part I of a series that could last until the end of time. Or something.

A lot of us were anticipating the chess match between the Stanford offense and the USC defense, and the looks and schemes that Monte Kiffin would throw at Stanford quarterback Andrew Luck. Early on in their first drive against USC, Luck would win one of the first crucial matchups.

USC isn't playing the Tampa 2 defense that Kiffin is renowned for, but instead is in Cover One, with one safety (in this case, #29 Jawanza Starling) deep covering the entire field. So pretty much all the Trojan defenders are playing one-on-one in pass coverage, meaning Luck is going to have to find the right matchup to exploit.

On this play, #85 Ryan Hewitt (who originally is in the backfield as the H-back) will leak out of the backfield and start turning toward the flat. #17 Griff Whalen is also going to head downfield and go square in eventually.

Down the middle, #82 Coby Fleener is going to run straight down the field before turning toward the inside of the field. Because of the mismatch between the big Cardinal tight end and his defender on the play (linebacker Dion Bailey), which will eventually suck in the safety.

This is not where Andrew Luck is going on this play. (This is probably where Jordan Wynn would've gone, because Jordan Wynn hates his wide receivers.) 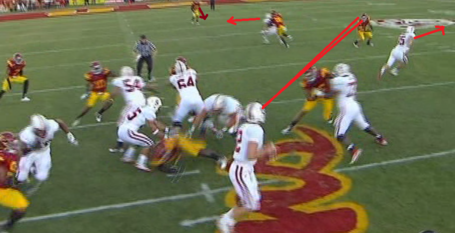 Now that Luck isn't worried about the deep high safety, he can start taking a look downfield and have to worry about one man--middle linebacker Chris Galippo, the man he would have had to read in the normal Tampa 2.

If Galippo decides to drop back into a zone and try and intercept the deep route, Luck goes underneath and hits Hewitt. If Galippo pursues Hewitt, then Whalen is the man to target. 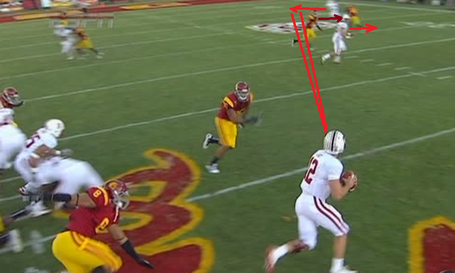 Luck (now on the run escaping pocket pressure) waits until the linebacker vacates his side, then drops it right behind Galippo and before the USC safety can come back and recover from his read of the middle of the field. 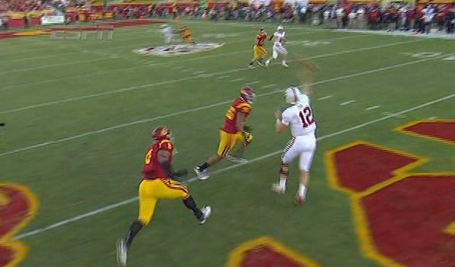 So yeah, this is pretty much a variation on a vertical stretch. One receiver goes high, another receiver goes low against two defenders, and Luck hits the man on his run with his front foot forward on a high release and quick velocity on the throw.

Luck showcased his excellent ability to read the defense and make throws on the run. He doesn't have everything down (he kind of gets the yips and leaves his feet, which is a big dangerous if the receiver isn't ready to adjust), but it all works out here. And he kept Stanford rolling to a touchdown on this drive thanks to this play.