The big game opening weekend is Oregon-LSU. Time to get you prepared!

If you try to picture the modern Oregon Ducks offense under current head coach Chip Kelly, the first play that immediately pops to mind is the famous zone-read. No one runs it better in the country than Oregon does. They have speedy running backs that can break creases, most notably Heisman candidate LaMichael James (following in the tradition of Jeremiah Johnson and Jonathan Stewart). They have mobile quarterbacks who can make the requisite throws but can also take off the ball, currently headed up By Darron Thomas (preceded by Jeremiah Masoli and Dennis Dixon).

If you're in a hurry, here's the bullet points of the zone read.

That's the nucleus of one of the most effective--reading the eyes of your opponent and exploiting the numerical advantage given to you. It's unconfirmed whether these methods have been incorporated into a PUA seminar.

If you're not in a hurry and enjoy pretty pictures, more fun after the jump. 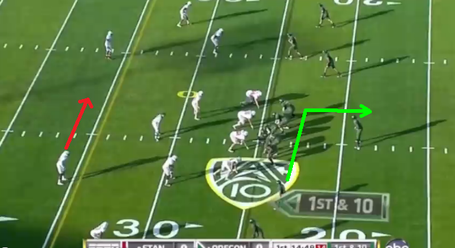 Here is your typical zone read play from last year's clash of the titans in Autzen between Oregon and Stanford. It's the first play from scrimmage for the Ducks. Oregon originally is in an empty set, although James eventually comes in motion back to a formation Oregon actually has used all season.

The Stanford safety also moves back into a middle position. It looks like he might be the shadow for James on this play in case he breaks the second level. 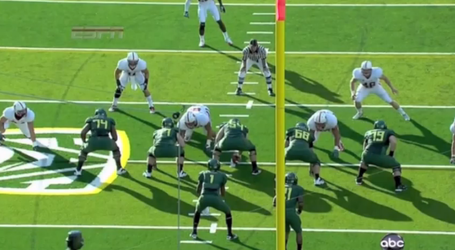 Here's a better view of this play from the end zone camera (I generally prefer end zone views because it's easier to understand what's happening on the offensive line, the most important part of almost any football play). Stanford is also committing six to the box with three defensive linemen, an outside linebacker, and two linebackers in support, while four defensive backs cover the four wideouts. The Cardinal also place the safety that appears to be spying James about ten yards from the LoS.

Hey, while we're at it, let's talk about blocking. I've told you all about the "read", it's time to figure out what the "zone" stands for. 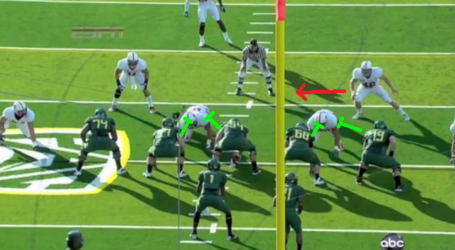 Oregon runs primarily a zone blocking scheme, which usually involves blocking particular areas of the field and the defenders situated in their spots. In this case, with only two interior linemen, the Ducks center and left-guard will tag-team the nose guard, while the right guard and right tackle take on the defensive end. Eventually, the double-teams are supposed to peel off toward the second level and these linemen will pursue and take on the linebackers.

Interestingly, one of the Stanford linebackers also hops toward the interior. This might have actually simplified Thomas's decision on the play. We'll get to that, but first things first, back to the read. 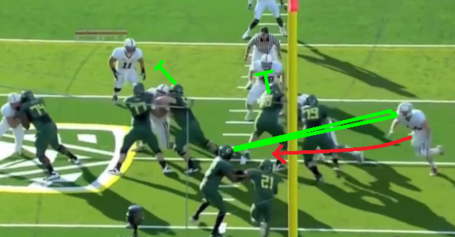 As you probably guessed by the last photo, the Ducks are reading the backside defender, the linebacker Chase Thomas. If C. Thomas crashes toward James, D. Thomas takes that ball and rolls to the outside. If C. Thomas stays on his mesh, D. Thomas hands off and views the rest of this play with his binoculars. Oregon's linemen are also flowing toward the left, and they're getting ready to move off their original double teams.

C. Thomas pursues James, and D. Thomas is now given perhaps one of his easiest zone-read decisions of the season. The linebacker that motioned inside is well out of position to defend against the quarterback and is about to get blocked pretty thoroughly, and with the Stanford defensive backs spread way outside, a wide running lane is about to open up. 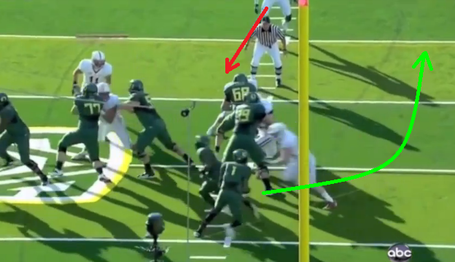 And now you can see the world of hurt the Cardinal are about to encounter on this play. With the unblocked defensive end pursuing James, the linebacker motioning inward now being dominated by the center, and the safety getting ready to charge in through the hole, Thomas has a HUGE crease on the right side he'll exploit for a 20+ yard gain.

Stanford seemed to be gambling a lot on this play that James would be the one receiving the handoff by commiting the unblocked defender, the backside inside linebacker, and the safety all to covering James. Thomas makes them pay. That's why it's always important to have at least one defender each shadowing quarterback and running back on the zone read, because otherwise you're vulnerable to getting burnt up by either one of those players, as what happened on this play.