Pac-12 Football Preseason Power Rankings, Where You Can Find Serenity

Share All sharing options for: Pac-12 Football Preseason Power Rankings, Where You Can Find Serenity

When I think of the Pacific Coast, I think of innovation, hiking trails, In-N-Out, stoner rock, and people who love Firefly (according to a recent poll that I discovered in a strange newspaper, 100% of residents in the Pac-12 region believe that the greatest monument in Canton belongs to the hero of the mudders) . There also seems to be a total inability to focus on anything, before its denziens start pondering environmentally-friendly options, like "man, the weather's great, let's go on a ten mile bike ride to anywhere" or "honey, think we should practice Reiki Yoga on the beach while watching dolphins dance to the fading sun."

This is why Firefly works best for this always imperfect experiment of contrasting Pac-12 schools with beloved TV characters (also, because I watched it, and the Law of Firefly states that you must LOVE FIREFLY AND SHARE FIREFLY). It's a space western, which combines two genres that seem so not totally meant for each other, like hip hop soap operas or Euro punk film noir.  But they both have quirky characters that we get attached to if we take the time out to pay attention to them. 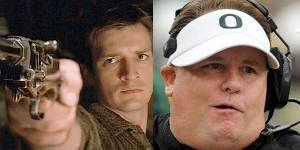 The current protagonist (some would even say anti-hero) in each of our current narratives. They can be fairly sardonic when they're down on their luck, they're total a-holes when they're riding high. They revel in conflict and play loose and fit with the rules. They have authority issues based on earlier failures in their histories. They take huge risks to garner big payoffs. They pump money into their enterprises to ensure they stay ahead of the game. They play to win all the time.

Neither the Pac-12 nor Serenity would be quite the show without these two captaining these ships.

The most attractive and alluring figure in each series, she represents an oasis from life's troubles, whether it be as a companion or a haven in a clean NCAA institution with outstanding academic credentials. Most often seen in the company of the rich and can be a little too obsessed with status. Struggles to interact socially outside those circles and can often lose her place in the real world.

When they're on though? Very, very attractive, whether it be mock draft boards or money situated in the whirlpool.

Execute strategy with brute force and better talent than their opponents.  Both suffer from ego issues; they believe they transcend the nature of confederation or humanity and would probably be best off on their own as their own independents. Prefer to conduct their primary battles individually, whether collecting bounties or fighting Notre Dame in a battle to see who wins the battle of the 1960s.

Never an easy kill. Even if one looks slightly more imposing than the other.

The brute who gets a lot of the dirty work done. Men of simple pleasures--drink, screw, fight. Can be intimidating to compete against at first, although eventually the shade wears off and you realize the bark is scarier than the bite. An underrated fun watch in the conference, particularly when they're turning it on; they can be ruthlessly efficient while still providing the humor.

One has a gigantic gun called Vera. The other has Vontaze Burfict. It's a draw as to who has the better deal.

Men of faith, or so we think. Their belief in higher powers is tinted with a streak of militarism. Their success is mysterious, their background curious, but they do seem to be generally on the level despite all the smoke and mirrors. Even though they're being elevated to a new level in unfamiliar surroundings, you get the feeling they'll be able to make do.

Despite the fact that they're both relative strangers at the start, it's likely they'll find themselves part of the federation soon enough.

Once perhaps a powerful and dominant entity in the region, both can only flex their power occasionally, and usually on their own territory. Shady in their dealings, they can be quite vicious when crossed. However, age is creeping up on their once proud empires, and they might lack the muscle to make anything more than sporadic resurgences.

Beware entering their territory and crossing them too much, because they are capable of inflicting extreme punishment.

Not to be trusted under any circumstances, no matter how sexy they might look when watching them. Whether she's undressing you with her eyes in your quarters, or her Airraid offense just put up 50 points against Idaho, they are always a danger to unravel right before you. But also beware facing them when they're down on their luck, because they can rot your Cinderella pumpkins in milliseconds.

Once a prodigy that could do no wrong, both eventually wore down over time and had to undergo massive rehabilitation efforts. Both are still too vulnerable to mental breakdowns and erratic behavior shifts.  However, flashes of astounding mental and physical power come and go, making you wonder what will happen once the pieces fall into place and they become whole again.

Still, at this point, more likely to kill you with their brain.

Can have her moments, but second-in-commands in their ship/state. Hard as nails, non-glamorous in getting the job done, never to be taken lightly. But they fade into the background during the seasons in favor of more intriguing characters, and they only arise at the last moment to make their boldest challenges. Formidable but subordinate, threatening while not quite dominant.

Push come to shove though, they can very likely kick your ass.

Maintains a slight air of haughtiness because of previous successes, general belief that their current status is beneath them. Struggle with relationship issues, including difficult dealings within their own family/state rivals. They're not all that bad in the large scale of things though, and they mean well. Their importance can often be marginalized a bit when it feels like they should be contributing more.

Both are familiar with doctor's beds, whether it be football players being carted off the practice field or freeing a sister from a top-level government institution.

The most pragmatic member of the crew/conference, they try to do things as conventional as possible. No hijinx, no wild acts, only occasional risk-taking when the situation demands it. However, a ship can't function without its pilot, and Colorado has done quite a bit of winning long before they descended into their current muck. Don't underestimate the value of each of these players.

Also, most likely to fight with toy dinosaurs in the heat of battle.

The cheeriest and the friendliest of the bunch, can get along fine and well with anyone. While on the outside they can look quite innocent and occasionally helpless in the battle lines, they're also knowledgeable and dependable at the right times and appreciate their rustic lifestyle. Whether it's carrying the Cougar flag to College Gameday or fixing up Serenity's esoteric engine, it's hard to match the love WSU fans show for their team and Kaylee shows for her crew.

Can take almost everything that's thrown against them with a smile. Expect plenty of smiles this year.

Steering us to beyond. Taking us home.