Opening The 12 Pac, August 29: Where Dennis Erickson Is Unfriending You

Share All sharing options for: Opening The 12 Pac, August 29: Where Dennis Erickson Is Unfriending You 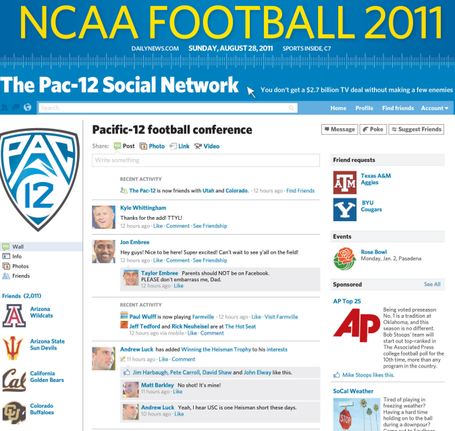 If Mark Zuckerburg was running the Pac-12, the above would have been the first step in the conference's evolution. This will hopefully be somewhere near the bottom of the "to-do list" for Larry Scott, somewhere between Pac-12 New Coke and Pac-12 body lotion.

Click here to download the PDF of the full file produced by the LA Daily News, which is curiously missing Mike Stoops's invitations for all his fellow players to join him in his quest to win Pirates vs. Ninjas.

Vontaze Burfict, bully victim? USC left tackle Matt Kalil openly admits to blocking him up ... then taking him down with his fists. It's suddenly become totally cool to turn Burfict into an object of ridicule.

Kirk Herbstreit picked UCLA to get to the Pac-12 title game, because someone had to make that pick outside of LA. Hey, if you're going to make a prediction, might as well do it with a team that's three point underdogs to Houston. Go big or go home!

Cal released a fall depth chart. Cal has deeper units in plenty of places this season, just without the name recognition. It's like when reality shows start switching it up with lame celebrities just to boost the ratings, then they bring it back to the old format, and it doesn't quite work the same anymore. Or it's not like that at all. I'm leaning toward neither.

Reggie Bush digs the Oregon cuts. It's good to see an old Duck alum stick up for his team and their many colors--wait that was Reggie? Man is going to have recite the USC fight song a hundred more times to repent.

Joey Harrington is lost. Good news is he's healthy. Bad news he had to put on horns to get back to that state. And leave the state. For Texas. Longhorn Network. I is confused (PS: Come back next year? We've got something better.)

Around SB Nation: Washington State got out of their final scrimmage with everyone healthy. Now it's a matter of getting players on the field to get positive rulings from the NCAA, like Rahmel Dockery, Alex Mitchell and Brandon Rankin ... Block U checks out Montana State, puts on it sternest face, and declares the Bobcats a true challenge ... two Hawaii starters are suspended for fighting in a Waikiki night club, but could still be available for the Hawaii game, because just let everything go and ride the wave bro ... ASU's backup quarterback has been named, and ASU fans hope they never have to see him take a snap.