Andrew Luck this, Andrew Luck that. Man's great, no doubt about it. But the Stanford Cardinal offensive line has been the rock of their resurgence to the top of college football's pedestal. Without their steady pocket protection and tough bruising blocking, Toby Gerhart doesn't become a Heisman Trophy candidate. And Luck certainly would still be a good quarterback, he just wouldn't be impossible to defend against.

Four Cardinal linemen received all-conference honors of some sort last year. The Cardinal allowed six sacks in 2010, second to Air Force (five, which I think was the number of passing plays Air Force ran last year) and eight in 2009, second to Boise (and who plays defense in the WAC anyway).

Won't be quite the same this year though. Gone are all Pac-10 center Chase Beeler, guard Andrew Phillips, tackle Derek Hall. Hall was solid at right tackle, but only started for one year; either Cameron Fleming or Tyler Mabry should be an adept fill-in. It won't be as easy to replace Beeler and Phillips though--Sam Schwartzstein takes over at center and Kevin Danser is slated for left guard, but neither have seen much action, only twelve games in all, mostly in mop-up duty.  Moreover, the second unit is extremely young; any injury could be devastating to Stanford's Pac-12 title chances.

However, the best of the bunch is back.

Junior David DeCastro was all-conference last season, and was the foundation for their run blocking game. And just like Luck, he could be departing a year early--he's all but ready to go. At 6'5", 310 pounds, he's the best guard prospect in next year's draft and probably in this year's, and he'll be crucial to opening up Stanford's Pac-12 title hopes on the inside.

Stanford's bread and butter the last few years has been the power run play. With DeCastro, it became nearly unstoppable to defend by the end of the season.

DeCastro might not have as much ability to run the power though because of the losses not only next to him, but behind him as well. Owen Marecic was DeCastro's partner-in-assaulting-defenders, and the two of them opened up big holes by taking out playside blockers and giving Stanford's runners wide open spaces to move through.

One big example is the first score of the 2011 Orange Bowl. 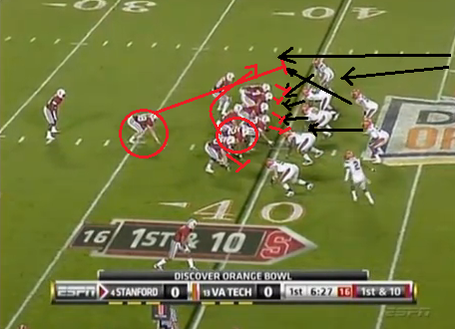 Stanford has placed multiple tight ends at the line to help seal off the Virginia Tech front line. While the rest of the Stanford linemen seal off the Hokies from the playside, Marecic leads to seal out the outside defender (spinning him around), and DeCastro pulls and is responsible for taking out the next guy (which in this case is the outside linebacker). The result is beauty: DeCastro flat pancakes his man, and there's Stewart zipping right past the two for the opening score.

I don't have an accurate count, but I believe DeCastro and Marecic ran this power play about 4204 times, and the mean result was a 65 yard touchdown for the Cardinal.

It feels like the power aspect of Stanford will be diminished without Marecic back there and no real established fullback to take his place. With no capable fullback, it makes more sense to put more receivers on the field and spread out the defense, forcing them to go speedier but smaller. That'll give DeCastro a good shot at taking out his blockers and the O-line to take out less defenders. It'll be important for Stanford to make sure their personnel are diverse enough to keep defenses guessing.

DeCastro may be the lynchpin, but he can't be the only guy bringing the pain for Stanford to step it up a notch.