If the PAC 12 wasn’t the most interesting conference in the country already, it is now. Offseason acquisitions and retooling left the PAC 12 with 4 of the nation’s most respected offensive gurus out there: Chip Kelly at Oregon, Noel Mazzone at UCLA, Mike Leach at WSU, and Rich Rodriguez at Arizona. All four coaches are distinctly different, attacking different parts of the defense with different looks and concepts, but all of them accomplish remarkably similar tasks.

This is the first report, of potentially many, highlighting and comparing the dynamic offenses in the PAC 12-Conference. The subject of this first report will be the inside running game.

While at West Virginia, Rich Rodriguez had his Mountaineers on the verge of being called a true powerhouse program. But after the Mountaineers (then ranked #2) fell to their hated rivals Pittsburgh in the final game of the season, Rodriguez bolted for Michigan and his tremendous "let's see how far we can go without playing defense" collapse in Ann Arbor is known throughout the nation. Rodriguez though, is an offensive genius; a pioneer of the run-based spread offense, and a great developer of skill positions.

Noel Mazzone, now at UCLA after being at ASU for a season, is a prototypical spread and shred offensive coordinator. Using a variety of formations, coupled with motion, a quick running game, and dynamic passing tree, Mazzone was the main reason for ASU's offensive turnaround. Mazzone's offense is relatively simple, and adaptable.

Mike Leach is, by all means, the most radical of all spread coaches, but perhaps the most brilliant. The Airraid offense was something that had flown under the radar for a while, but after this play, the high powered, fast paced, air it out offense turned into an actual offensive scheme. If there were any doubt about this offense being a legitimate (not gimmicky) scheme, it was redacted by Geno Smith's performance in the 2012 Orange Bowl: click here.

Chip Kelly is another radical "Spread Scientist," using sometimes extreme formations (explained further here) and a rapid, aggressive style to put up lots, and lots, and lots of points. Kelly might be the best coach in the nation at using talent in unique, productive fashions.

All four coaches are different, but the same. Let's do some quick analysis after the jump: 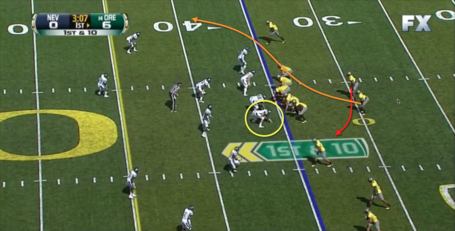 This is the staple of the Oregon offense the Inside Zone Play. There is straight zone blocking, and is the most ran play in Chip Kelly's offense. Here are some cut ups of this play:

Contrary to popular belief, the IZ play is a physical, north and south play, that requires combo blocks to the second and third levels. 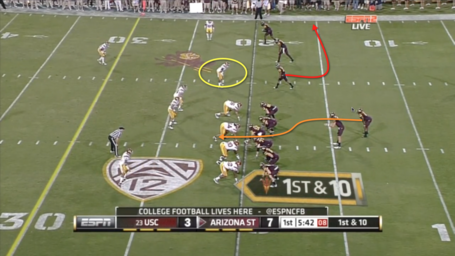 At ASU, the use of a bubble threat creates a Zone "Key" where both the interior and exterior of the defense are attacked. This tweak also sets up the passing game, in fact, it works literally hand in hand with the passing game. JT34 over at Bruins Nation was all over this concept:

ASU... ran a variant of the zone read with a bubble screen on the backside in order to spread the defense even further... Mazzone combined the handoff to the back with a quick screen to the outside - bubble or outside "key" WR screen. Mazzone forces the defender to declare towards either the back up the middle, or the bubble/key screen to the sideline

The video below goes through several variations of the play on one drive against USC.

This concept may be tweaked even more by the more agile quarterbacks at UCLA. Should the QB be added to the running game, expect similarities between Mazzone's offense and Rich Rod's at Arizona. 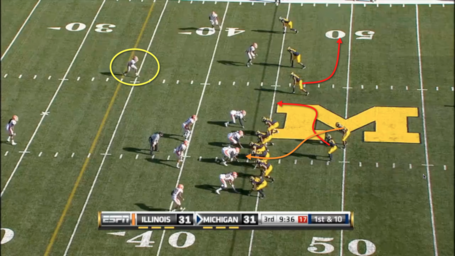 When we last saw Rodriguez, Denard Robinson was his signal caller. If you didn't already know, he's pretty fast. Defenses adjusted to his speed, ensuring that he couldn't get loose: 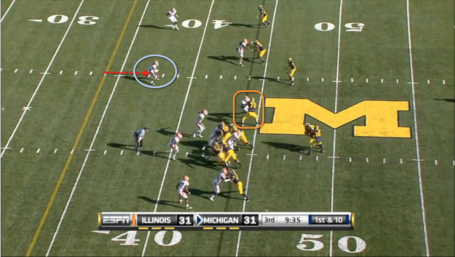 You'll notice a few things in this picture. First, this is a Zone Key, where they aren't reading the defensive end, but rather the safety. Secondly, When the safety sees run, he runs up. Robinson reads that, and hands the ball off. 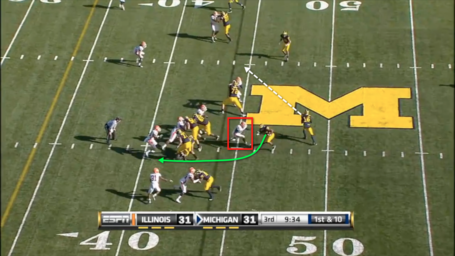 Despite the missed block in the middle, this is a pretty well developed play. There is a noticeable hole with a one on one opportunity for the running back. Also notice how Robinson's stance is pointed towards the LOS. This is a true triple-option play, despite the blocked defensive end.

Looking forward, there is still much to cover. We have a few more concepts to cover on the ground, but soon we'll start analyzing things through the air, including Mike Leach's Airraid offense.

You can watch the video version of this breakdownhere at FishDuck.com

Hopefully you enjoyed this quick analysis here on Pacific Takes; there is plenty more to come!