In one of the conference's tightest races for quarterback this season, the talented freshman Marcus Mariota beat out sophomore Bryan Bennett for the Ducks' starting quarterback position. The decision was a long time coming, given Mariota's breakout performance in the 2012 Spring Game in which he completed 18 of 26 passes for 202 yards and a touchdown while carrying the ball for two scores from 14 and 82 yards out.

Mariota, in many circles close to the team, is regarded as the future of Chip Kelly's offense, and a perfect player to lead the Ducks out of the post James-Thomas era. Mariota has already showcased an advanced understanding of Oregon's passing tree and running game, and possesses the physical ability to surpass Darron Thomas's success through the air and on the ground.

Duck fans can rest assured that their offense is in good hands for the next 3-4 years. How can Oregon, who hasn't had a QB finish every game since Chip Kelly's arrival in Eugene, avoid losing Bennett for his final few years of eligibility and retain the stellar depth that they have now? We'll take a look at that, and see some of Mariota's best plays from the Oregon Spring Game after the jump...

The depth issue is sure to change soon, unless Bennett is tremendously compelled to stay to compete for the job throughout the season. Dustin Haines is dealing with off-field issues, and Jake Rodrigues is recovering from a devastating leg injury, so should Bennett depart, and the trend of Oregon QB's getting injured continues, the Ducks will need to prepare their reserves well for the heart of the PAC 12 season. Bennett could reclaim the job, but it could be in his best interest to try elsewhere if things go as expected with Marcus Mariota at the helm.

But all of that is still conjecture, and Mariota's future at Oregon is incredibly bright. Here is why:

In the open field, and between the tackles, Mariota has great vision and has wheels to boot. One of Darron Thomas' biggest problems was his tendency to run sideways instead of vertically. Yet, when he did run vertically he was very fluid and talented. Mariota is a similarly talented vertical runner, but does not hesitate to turn it up. In the play below, Mariota runs a QB draw after motioning a receiver out of the backfield, leaving just four defenders in the box: 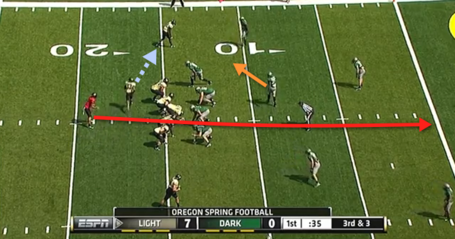 As Mariota draws the rush in, the pocket begins to create a lane for him, and he plants his foot and explodes forward. 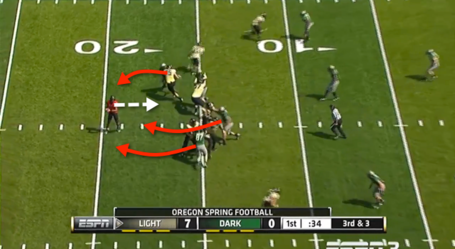 With a few blockers set up, Mariota makes the right read and steps to his right to finish off the successful draw and skates into the endzone. 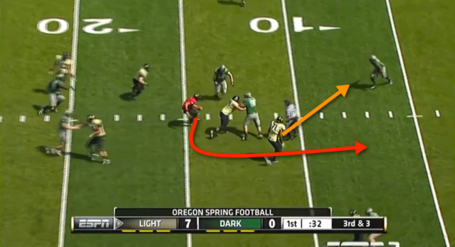 Then there was that 82 yard TD, as Mariota left several track-level speed defenders in the dust.

Next comes his passing ability, which should be regarded as one of the best Oregon has seen as a long time, especially from a freshman. In this play, as I broke down earlier this year here, Mariota attacks a Cover 2 defense with expertise, throwing the ball between the safety and corner in perfect stride with his receiver. 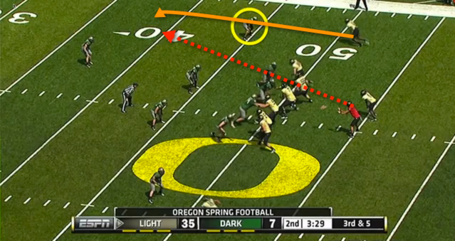 As soon as the receiver passes the corner guarding the flat, Mariota identifies the coverage correctly. 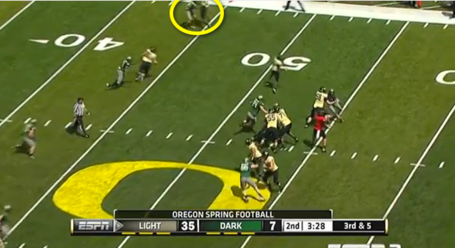 Despite the approaching safety, Mariota puts the ball right on the money. (Excuse the blur) 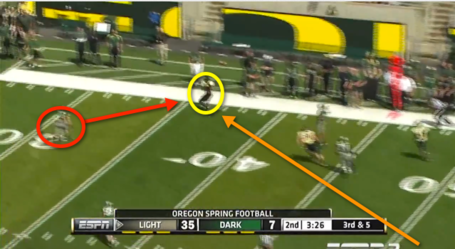 It would have been slightly naive to say that losing LaMichael James wouldn't deter the Oregon offense, but losing Darron Thomas may not effect Oregon even slightly. Marcus Mariota has the potential to lead Oregon to even higher achievements in 2012 and beyond, and he'll get his first shot when the Ducks open against Arkansas State in Autzen Stadium on September 1st.

The next eight days are going to seem like an eternity, that's for sure.