It’s football time in Eugene, as the Ducks are opening their season at home this year against Coach Gus Malzahn and the Arkansas State Red Wolves.

The last time Gus Malzahn faced Oregon, he found himself utterly stumped against the quick, but stout Oregon defense in the 2010 national championship game. Plus, without Cam Newton, Gus Malzahn’s offense looked a lot different at Auburn last season. Instead of pounding away with his super-freak athlete in Newton, Malzahn, paying homage to his roots in the Wing-T offense, used misdirection and leverage to compensate for the change in personnel.

He’ll have a versatile quarterback at his disposal right away, though, in Ryan Aplin, who will have to make his best Cam Newton impression if he wants to best the Oregon defense on Saturday though.

We'll take a look at the inverted veer concept, as well as other Malzahn staples after the jump. 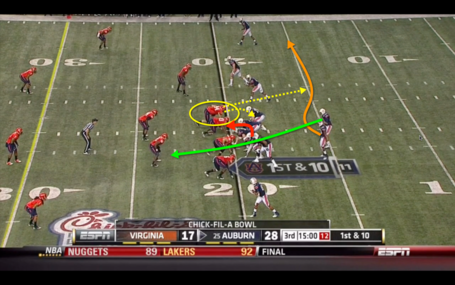 As the guard pulls to complete the power look, the Virginia defender goes upfield, making a lane for the QB on the inverted veer QB power play. 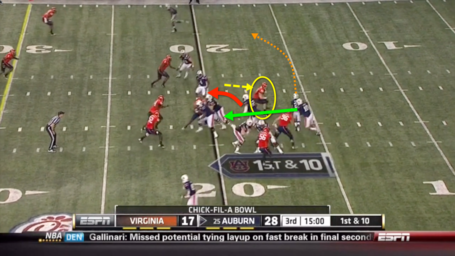 Cam Newton probably ran this play under Malzahn more times than he can count. It combines the old Wing-T and single wing philosophies with the new age spread option seamlessly.

Against the scrape exchange, the pulling guard in the inverted veer power play negates the defensive strategy. 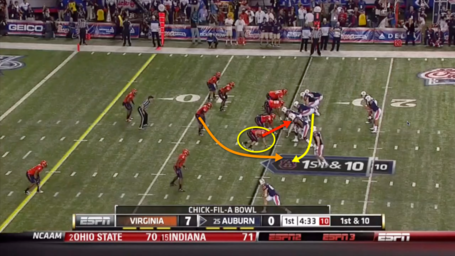 As for misdirection along the line, check out this unbalanced set, that uses a covered receiver to leverage the exterior of the defense. 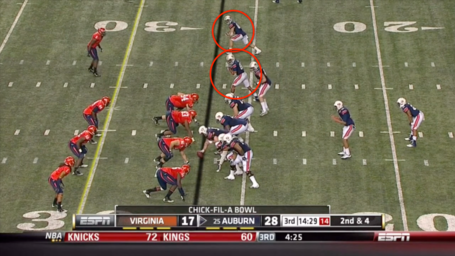 Then watch as the O-Line pins down, and pulls two linemen out to the exterior for the QB to rush behind. Unique playcalling, to say the least. 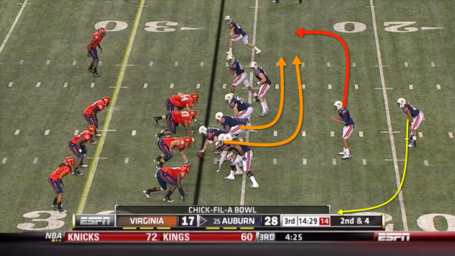 Screens are important to slowing down aggressive defenses, like Oregon's, and Malzahn has plenty of variations at his disposal. 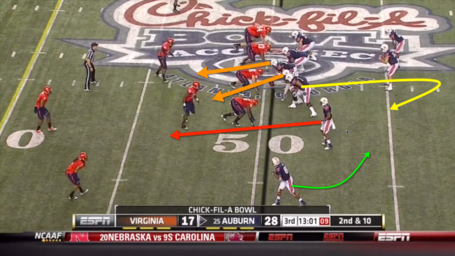 The Auburn offensive line executes perfectly as they set up the screen for their receiver. 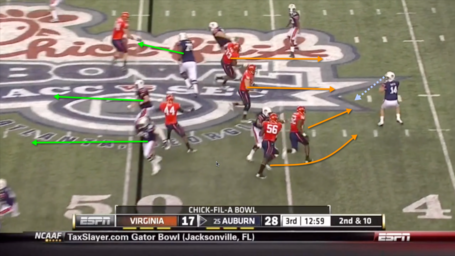 Malzahn counters defensive overagressiveness in the run game with end around plays, which might seem like gadget plays, but are an actual series based concept. 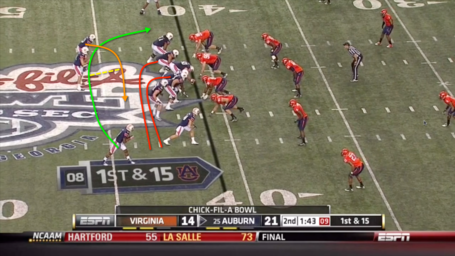 Whatever the case, Malzahn wants to run the ball first. Expect loads of inverted veer plays, combined with traditional running concepts tweaked for this new age-scheme to be the bulk of the ASU gameplan against the Ducks on Saturday.