The new Pac-12 television deal involves a significant part of the television carriage moving over to FOX and FX as their primary distributor, but ESPN is far from being out of it. They will host a package of primarily late night games on ESPN and ESPN2 that should provide the conference with plenty of fine national coverage from the Worldwide Leader.

It looks like we have another dream announcer based on the new ESPN announcer assignments. Meet Joe Tessitore, the man who will destroy your great football team. 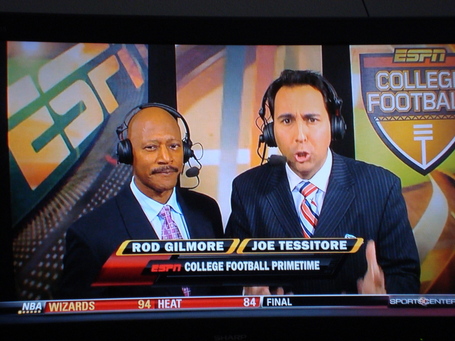 I'm not quite certain when Joe Tessitore became the Gus Johnson of college football (which is weird because Pac-12 football is Gus's big gig now), but it happened rather recently. Here's how he left the Big 12 national title hopes a flaming wreck in the span of 24 hours last season when Oklahoma State and Oklahoma went down on successive nights.

That was fun. Now the warlord of upset brings his tools and tricks to the Pac-12. Oh boy oh boy oh boy.

Oh yeah, there's Matt Millen, but he can be ignored if you try hard enough.

This leaves Millen, who if you're being honest is not as terrible as you're remembering. He's firmly in the lunkhead school of announcing, and frankly we're used to being so underwhelmed by color guys that we don't even really hear them unless they're a.) saying something patently wrong or b). pointing out hot grandmothers in the stands. Millen does both, and at his worst will just be the typical dopey, gassy man-balloon of a color guy you expect and ignore at all but his worst moments.

The first scheduled games for the Pac-12 on ESPN late night: Oregon vs. Arkansas State Week 1, followed by Illinois vs. Arizona State Week 2. Prepare to be entertained.