College football TV deals have increased by multifold the past decade, and much of that has come via the SEC's relative dominance of the nation. Much of the SEC dominance of the sport has to do with ESPN's supersaturated coverage of the conference and the sport in general, which tends to lean the SEC's way if it comes down to them or anyone else. ESPN and the SEC have become almost incestuous in the way they conduct business with each other, and both have profited from this mutualistic relationship.

Doesn't this cover seem a bit strange then? 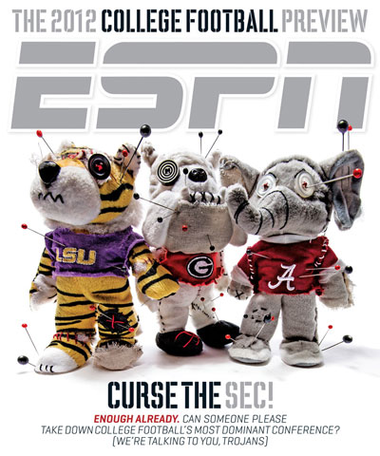 This is the double-edged sword you get with ESPN. You get the money, but you have to deal with their tabloidish and incendiary coverage. This is fine coming from a partisan site that clearly is biased. This is just downright crude.

Sure, it's fine to note the SEC dominance. It's even fine to note that USC is a national title contender. And yes, you can even note that fans are tired of the SEC always being at the top. But this seems to be a direct stab by ESPN at their SEC partners, because they know they hold all the money and can poke at their members all they want.

It does seem to go with ESPN's memos for creating the dominant stories of the month. The SEC is old and tired, and USC is the new and exciting hot topic. Pumping USC up keeps college football fresh to a country that is always hungry for novel thing (Although it's hardly like the Trojans are a new and hot trend like say Oregon. They've just been off on a two year sabbatical).

Still, it seems really bizarre to see a network that has such deep connections with one conference go out of their way to antagonize a huge sect of their college football audience.