The nationwide reaction to UCLA's win over the Nebraska Cornhuskers was "surprise." Jim Mora and his coaching staff whipped a talented team into shape, and put a complete, respectable group on the UCLA sideline for the first time in over a decade. Bruin fans who are thinking UCLA will spin into its usual downward spiral have a reason to be pessimistic when it comes to UCLA winning a "statement game," then laying an egg the following week. UCLA won a game against a good team, yes, but the Bruins have been talented enough to be a conference contender for a while, they just finally have a competent coaching staff, and that's why things will be different this season.

Under the last coaching staff, UCLA was nothing short of embarrassing on both sides of the ball. They had some brief glimpses at what was truly possible with the levels of talent that UCLA had amassed while Neuheisel was at the helm, see Tennessee games, and Texas win, but reality, as it often does, hit quickly for the Bruins. For instance in 2008, UCLA followed the win over Tennessee with a 59-0 showing against BYU.

The problems that hounded the Bruin offense while Rick Neuheisel was around included an inability to sustain drives, hesitance to take shots downfield, and mismanagement of skill players. For the most part, UCLA's offensive coordinator Noel Mazzone has done a great job changing those problems. His freshman quarterback Brett Hundley has taken care of the offensive rhythm nicely, consistently used his feet to extend drives, and dialed up some long passes against Nebraska. With Hundley's help, though, Mazzone has implemented a system that molds to UCLA's strengths, as opposed to, say, running a Pistol offense without coaches who know how to run the Pistol offense.

Simply put, Mazzone's spread scheme is basically the only reason UCLA cracked the top-25 for the first time in 78 weeks, and it was incredibly strange to see the UCLA play-calling actually challenge a defensive coordinator. In the pistol offense, it was fairly obvious that UCLA was struggling to pass the ball from a short pocket, and was sluggish in their play action game, so obviously PAC 12 defenses loaded the box and blitzed Prince and Brehaut way too often. As simple as it sounds to combat that as an offensive coordinator (any twelve year old that plays NCAA 13 knows that screens are one thing that works against overaggressive defenses), the Bruins never responded. That being said, anything involving the UCLA offense exploiting mismatches is nothing short of revolutionary for the Bruins.

We'll take an quick look at Mazzone's key motion after the jump.

The use of Mazzone's trademark "key" motion, involving a running back or receiver vacating the backfield, gave Nebraska fits all game long. The motion often matched up Damien Thigpen, Jordan James, and Jonathan Franklin against the blackshirts' stalwort middle linebacker Will Compton in man-coverage, which gave a tremendous advantage to the speedsters on the UCLA offense. When the Nebraska wasn't in man coverage, the motion gave Hundley the inside track on identifying the coverage. Extend the scheme to guys like Shaq Evans and Steven Manfro, and the UCLA offense forces you to defend a whole bunch of weapons at the same time; something the Bruins haven't done in a very long while.

Here is an example of the UCLA running its "key" scat play against man coverage: 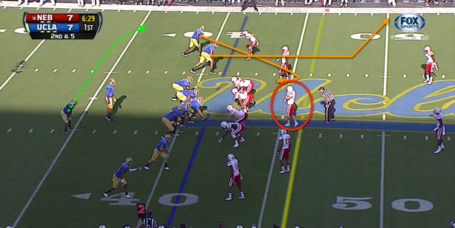 The "Scat" play involves a receiver running a slant-curl, another receiver running a corner route, and a final receiver, sometimes a tailback, running out to the flat. Plenty of offenses run this concept, sometimes extensively. Mazzone adds his own flair with the "key" motion, which is used to force linebacker Compton to "show his hand" to Hundley. 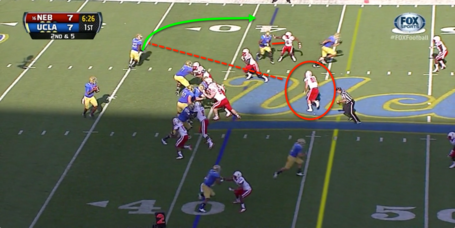 As you can see, Franklin is at a huge advantage just moments after the ball is snapped. Compton is more than ten yards away from his man and Hundley is already preparing to release the ball. The remaining defenders are already accounted for downfield in man coverage, and Franklin is looking good before he even turns to find the ball. 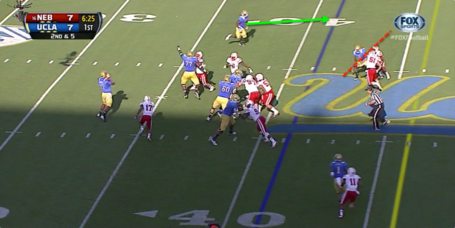 When the ball is released, Franklin is five yards away from every Nebraska defender, while Compton is being screened by the slant-curl route Shaq Evans is running. 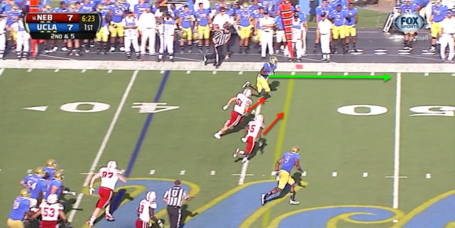 Franklin gets the ball in his hands, and it's off to the races. It is that simple when it comes to putting the ball into space, and should make UCLA fans both excited for the future of the program, and incredibly disappointed in the past few coaching staffs. It's slightly early to say that UCLA is back in the form that Cade McNown left them in in 1998, but I'd be buying UCLA's stock if it were possible. While it may not be awake just yet, the sleeping giant in Westwood finally has a reason to stir.