Kansas State's defense took shortcuts when preparing for Oregon's dynamic rushing attack. After stifling the Ducks with their scheme on the first drive, Chip Kelly and Mark Helfrich made a quick adjustment to take advantage of the Wildcat game plan.

Share All sharing options for: Kansas State Gets Burned By Oregon's Quick Adjustments

Oregon has seen dozens of variations of defensive schemes to slow down their offense over the years. Some, like the Cover 0 defense, and Bear front were more effective in longer stretches, and others were, simply put, less effective. Those less effectives schemes have included the scrape exchange, and fake injuries. Kansas State added to the list of ineffective schemes by following a rule that is usually installed for elementary defenses.

Plenty of high school linebackers are told to "read the guards," as nearly every high school scheme can be identified by the guards' actions. To be honest, plenty of college schemes can be identified by the guard position as well. Typically, if a guard goes one direction, the ball is going the same way. Many of Oregon's schemes, such as the power play and sweep read play, follow the same rule. However, Oregon's spread attack allows the guard tendency to be switched with a simple change in the play-calling.

In the image above, Oregon is preparing to run their inside zone play. While this play showed a bit of Oregon's rust from the long BCS wait, but it blatantly shows KSU's scheme to start out the game. The Kansas State linebackers opened the game with their elementary scheme and the KSU linebackers will read the right guard, as indicated by the dotted yellow line. Oregon's quarterback Marcus Mariota is reading the defensive lineman in the yellow circle.

At the mesh point, Kansas State's linebacker sees the guard start to block towards the left hand side, and aggressively commits to attacking Kenjon Barner, Oregon's running back. The red arrows above indicate his path from the defensive backfield into the Oregon backfield. While KSU's linebackers crash to stop the running back, Marcus Mariota reads the defensive lineman in the yellow circle. The defensive end can either crash towards Barner, or stay put and guard Mariota.

Just as Mariota has to decide whether to give the ball to the running back, or pull the ball for himself, Kansas State's linebacker bursts through the offensive line (red arrow above), and heads straight for the running back. The original read man sits to guard the quarterback (orange arrow), however, the KSU linebacker's position forces Mariota to adjust his read and pulls the ball to avoid a big loss.

In the image above, Barner is actually being tackled by the Kansas State linebacker, and Mariota finds himself caught in a one on one situation with an athletic defensive end, and ends up taking a loss on the play. Kansas State forced Oregon into a third and long later in the drive, and forced the Duck offense off the field early in the game. In between the first and second drives, however, Oregon's offensive staff made a great adjustment to counter KSU's aggressive scheme. 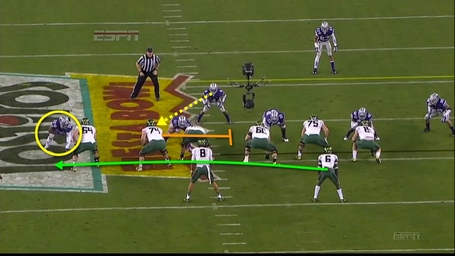 Oregon switches the guard action on ensuing drive. The left guard will be pulling to the right (orange lines above), while De'Anthony Thomas will be running to the left (green arrow above). Kansas State's linebacker will be reading the guard action, and incorrectly identify the power play, where Oregon pulls a guard to the side of the play. Unfortunately for KSU, the ball won't be going that direction. 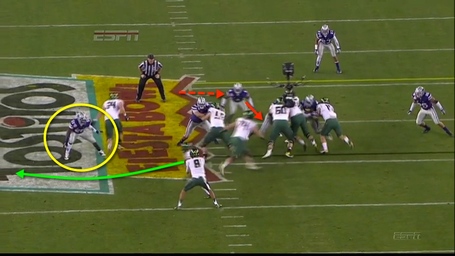 As soon as the guard pulls to the right, KSU's linebacker crashes hard to the right hand side, setting up a big hole on the left hand side of the defense. To further solidify Oregon's countermeasure, Marcus Mariota does not appear to read the defensive lineman in the yellow circle, and hands the ball off even if the defensive lineman stays put in the hole. De'Anthony turned on the jets when he got the ball, and gained big yardage to start Oregon's first offensive scoring drive.

After a few similar plays, KSU was forced out of their scheme, bringing the power play, and inside zone play back into the mix, which ultimately proved too much for the Wildcat defense.

So here's a note to defensive coordinators: reading Oregon's guards may catch the Duck's off balance for a minute, but being too cute against the Ducks could go poorly for your defense.