Cal and Washington State: Raiders of the Offensive Sort

Sonny Dykes and Mike Leach face off in what may prove to be one of the highest scoring games of the year. We compare the Air and Bear Raids.

Share All sharing options for: Cal and Washington State: Raiders of the Offensive Sort

The battle of two of the most prolific offensive attacks in the country has come upon us this weekend, and it would be remiss if I didn't give each offense the proper analysis they deserve as they've fared so far this season. Let's start with the coaches

Mike Leach and Sonny Dykes come from the same coaching tree, coming from the Hal Mumme school of throwing stuff and calling unnecessary timeouts. Dykes went on to coach under Leach at Texas Tech, serving as wide receivers coach and sharing offensive coordinator duties with Dana Holgorsen after 2005. Due to this influence, the playbooks of the offenses look similar. Both run any number of screens, four verticals plays, and other passing routes. There are quite a few key differences though in the wrinkles that each team runs offensively.

A main difference between the two systems is the willingness and ability to run for Cal. In Daniel Lasco and Khalfani Muhammad, the Bears have a running duo that Washington State cannot match. And for all the talk of passing and the excellence of Jared Goff this season, Cal has run more running plays than passing plays. This is due to the interference of Tony Franklin, offensive coordinator for the Bears. The Tony Franklin system has been enacted, and as I have written about in the past, it's an offense building off of each play. Runs to one side beget screens to the other side. These open up the deeper passing game. This season, screens haven't been a large part of the Bear Raid, with the speed of the Cal offensive line being in question. Instead they have used a few quirks in the offense, whether it be the Bone formation or using a tight end on the line (almost unheard of in the Air Raid), to help stretch the defense.

The Air Raid by contrast doesn't really run. Though the Cougars run about a quarter of the time(the most they've run in quite a few seasons), it isn't their calling card. Instead they use screens to stretch out the defense horizontally to go along with stretching the defense vertically. They have stable of receivers for Connor Halliday to throw to. Vince Mayle delivered against Utah to the tune of an 80 yard game winner on a slant. River Cracraft, Isiah Myers, Dom Williams and Rickey Galvin make up the remainder of the receiving crew. They use short routes to set up long routes and tend to make decisions about where to throw pre-snap. The folks over at Coug Center have a great guide to the Air Raid here, which anyone reading this should read to have a deeper understanding of the game. Let's start with the analysis though.

First we go over the use of the running backs in the Bear Raid. Daniel Lasco already has more rushing yards than he had last year, due to a combination of greater use, lack of injuries, and the fact that Lasco has figured out how to use his superior lateral quickness to stay upright. 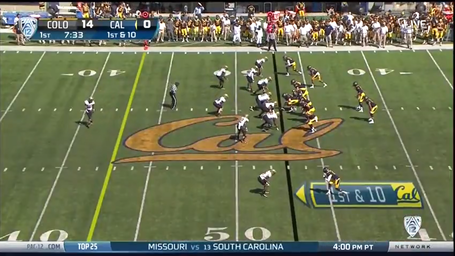 This play isn't anything special, just a zone read going to the right side of the formation. I believe it shows the growth of the Bear Raid from year to year. Cal puts a tight end on the line, Stephen Anderson, who would do his damage from this spot in the game. On the snap of the ball, the offense flows right, Lasco gets the ball, and Goff makes sure to fake the passing motion to the backside of the play to keep the defender honest. 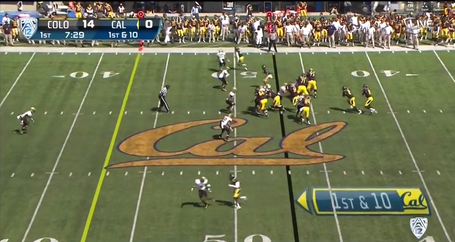 The offensive line has created a good initial crease, and the pass fake has caused two of the linebackers to stay in place instead of reacting to the run. Lasco hits the hole created between Chris Adcock and Alejandro Crosthwaite, breaks a tackle, and heads upfield. Maurice Harris and Bryce Treggs continue their blocks upfield, giving Lasco plenty of territory to work with. 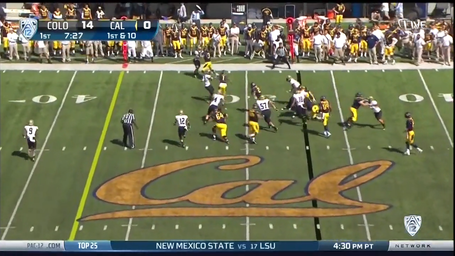 Lasco ends up with enough space here for an 11 yard gain after shedding another tackle. This play doesn't happen last year. Every piece of this play is that much sharper, from the downfield blocking to hitting the hole harder. Execution like this is the key to both of these offenses.

Now to the Bone formation. A hybrid between the pistol and the wishbone, the bone formation is the Bear Raid version of the heavy set. The two bone positions are filled by Lucas Gingold and Ray Hudson, who would be fullbacks or tight ends in a conventional offense. 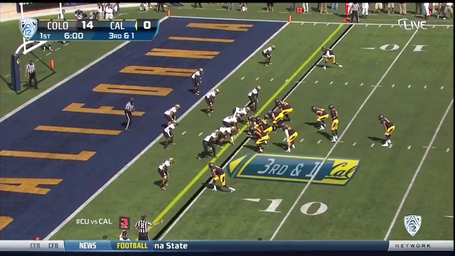 This is the base bone formation with Lasco the deep man in the backfield. Motion moves Gingold to the right, hinting at a run off the right tackle. 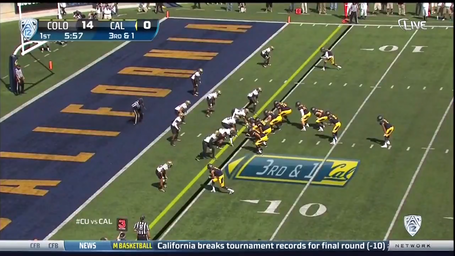 But it isn't a power. Goff sells the run and Gingold delays out into the flat. Gingold's new nickname is the Spanish Inquisition, because no one expected him. 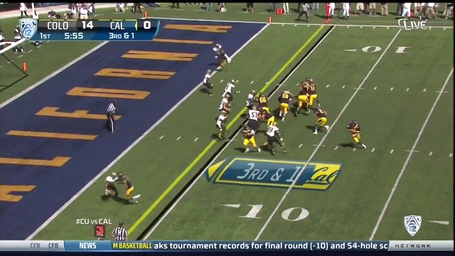 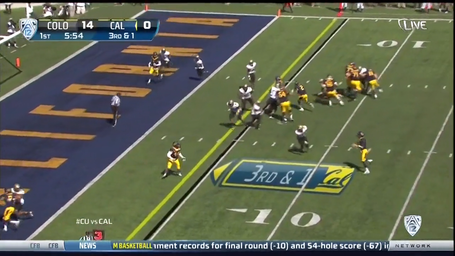 The expectation and over playing of the run separates the Bear and Air Raids. It also shows the growth of the Bears as an offensive unit that can put up points on anyone.

The folks of California Golden Blogs have put together a wonderful analysis of the Air Raid, so I'll try to give my own analysis from what I've seen this year. From the plays that are mentioned, I can tell you that four verticals, the screens and the halfback swings overlap between the two playbooks. Kenny Lawler's first touchdown catch against Colorado was on a four verticals play thrown as a comeback so the cornerback couldn't have a chance.

Anyway, Connor Halliday is throwing for 463 yards a game with a 67% completion percentage. To borrow a phrase from the late Bill King, never in my wildest alcoholic nightmares would I have imagined a quarterback averaging 450 yards a game. But Halliday does it, and he could be even better at it, which is even more frightening to a suspect Cal defensive backfield.

During the first Washington State drive of the fourth quarter against Utah, the Air Raid came into full effect. Here is a drive summary.

This drive is surprisingly balanced, with 5 runs and 7 passes. The running success can partially be attributed to the rain in Utah that day. But what they do is uses the short passes to open up everything else. On the first third down play of the drive, the Cougars run a mesh concept from a trips formation. 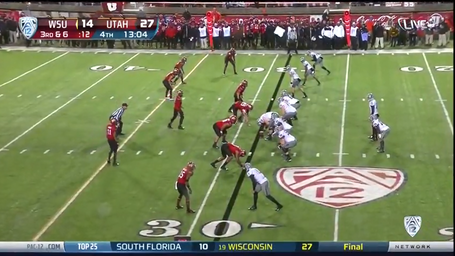 The mesh concept allows for the receivers running the shallow crossing routes to sit in the holes between the zones that the linebackers create. When in man coverage, the crosses can be used as a pseudo pick. 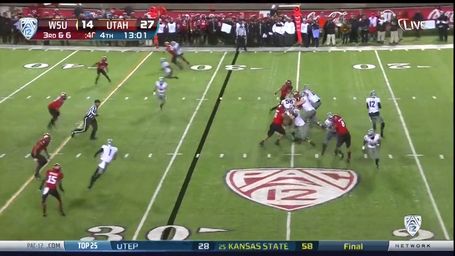 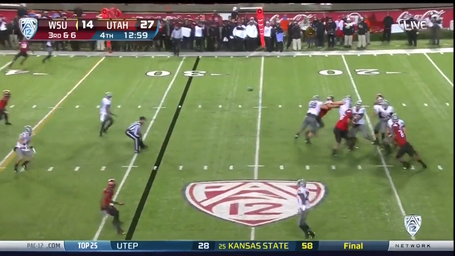 River Cracraft gets the reception on this one, sitting in a hole in the zone. This is essentially a well rehearsed game of pitch and catch for the Cougars. It opens up even more in the intermediate passing game as well. 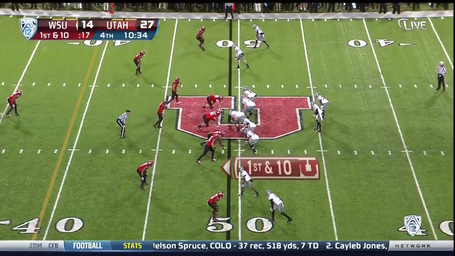 Washington State comes out with a base set with the inside receivers on the line. On the previous play I screenshot, Utah played back in a soft zone, whereas on this first down, they rush six, leaving the defensive backs in man coverage. The play that they run is designed to take advantage of this, running a combo hitch under a corner. The hitch route keeps the cornerback honest and unable to make a play on the corner. The safety is too far away to make a good play on the ball. 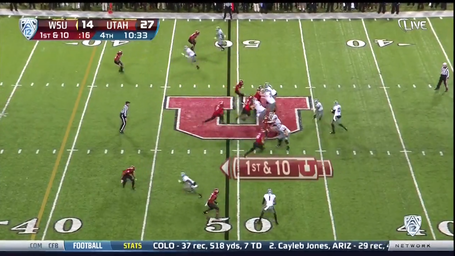 This leaves a wide open River Cracraft for a 21 yard gain. 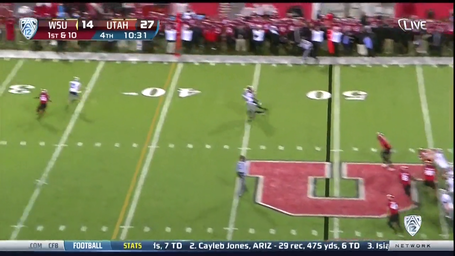 In summation, both offenses have different ways of achieving the same thing. They play to the strengths of their team. In all honesty, both offensive staffs are a bit like Denzel Washington in Remember the Titans. There's a line where he says that the playbook is "six plays, run 'em over and over again, works like Novocaine, every time." Except these guys are running spread attacks instead of the veer option. We will be in for a treat between offensive juggernauts come Saturday at 7:30. Hopefully the scoreboard won't break from all the points put up.