Inside the Production Truck: UCLA at Cal

We had the opportunity to go inside the Pac-12 Networks' with their production team and watch the UCLA-Cal game from the lens of the lens.

Share All sharing options for: Inside the Production Truck: UCLA at Cal

Allow me to tell you that a television production truck is a chaotic box. It’s an organized chaos to be certain, but to the untrained eye, ear, and nerve, it’s pure chaos. At first mention, that’s an obvious thought. This is a group dealing with the unpredictability of live, the reason we love sports. Anything can happen! It’s the very premise of fandom.

But the production truck is at its least chaotic when the action is live. Directing the camera to the ball is autopilot. But a play stopping whistle? That sounds something like: Foul on 3. 24 to the line. Second foul. Graphic. Look at the coach, look at the coach, looking at the coach, foul shot up. These are the communications that dictate the story. When the clock stops, the production team is on. It’s where their team performs with as much touch, feel and communication as the basketball unraveling before them in order to tell the story.

For Wednesday night’s UCLA-Cal game, I had the opportunity to join Michael Molinari and his production team inside Mora12, their cozy production truck. I became most intimately familiar, spatially speaking, with the visual side of affairs. I saddled up next to Molinari and his director, Scott Barke, in the front row of infinite screens, my computer open, ready to absorb. I had no idea where to begin. One screen was displaying football programming while another was on the crowd; yet another was on Ashley Adamson’s forehead. There was one playing the game’s teaser and then a set of cameras focused on JB Long and Don MacLean, the game's commentators. Meanwhile, the clock in the middle of all those images read 7:27:24. Air time was 7:30:00. We weren’t even live and already there was an immediacy befitting overtime. Eventually I would come to understand that we were in the midst of our third attempt at filming the game’s introduction.

Inside Haas Pavilion, events were approaching the National Anthem and player introductions. In production terms? Silence and darkness. Getting to tip off was hectic. Were we going to get Adamson on camera before or after intros? Would she have a camera on her or should we just mic her in? Is MacLean doing keys to the game? Through this deliberation, I was listening and trying to decipher which camera was which on the multitude of screens before us. Through my headset I was tapped into just about every available microphone that was ‘open’ (that’s me dropping some industry lingo I picked up). 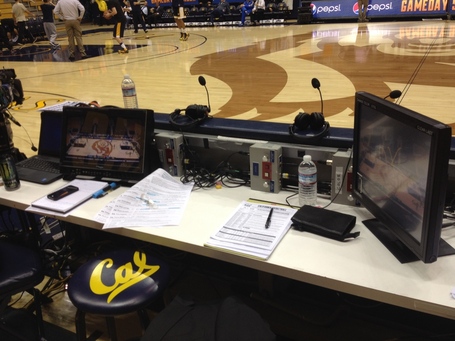 The most common voices were Molinari and Barke as they were producing and directing. What does that mean? Well as it was described to me and later experienced, the producer is watching the past and the future while the director is watching the now. The exciting angle you see from steal to outlet to dunk? That’s Scott. The three screens (basketball term here) that Jordan Adams ran through to get to the open three two minutes ago that is now being described by MacLean? That’s Michael. These two are telling you the game’s story. Cameras were directed to catch Adams running amuck while MacLean and Long described the action. Molinari is listening to the voices of the game (MacLean and Long) to make sure whatever is next befits their narrative. But he’s also listening to Barke to ensure he can produce that narrative. And he’s also listening to graphics behind him with the next imagery to enhance the image. And then there were four other voices I could never quite figure out.

We’re talking an entire truck here. And a camera crew with support staff. A team with prescribed roles and their individualized means to the production end. Getting this UCLA-Cal story told was each of the voices. They were providing game insights, camera angles, graphics, effects, timing, and reminders. As the game unfolds – and even more when nothing unfolds – this group comes together as a team to produce the story.

And they’re a very unique team. There are only four core members. This quad of talent produces most regularly along the Pac-12 trail. Behind them – but really behind it all – are production professionals hired for the job. About 26 who come together on game day afternoon to begin set up.

Uniquely a part of Pac-12 crews are students. I met one of them who was sitting alongside the talent (more industry lingo, this time referring to MacLean, Long, and Adamson), handing them promotional cards and scripts as part of the broadcast. My new friend was one of more than 2,500 Pac-12 students in paid roles learning and contributing to television production. It’s the most extensive student program out there. Hey, it’s not the Conference of Champions for nothing.

Now depending on your role, you’ll handle a different facet of set up. There’s the obvious manual configurations of cameras, cords, mics, etc. But then there’s also the story. We watch sports for the live action but there’s another layer. It’s the producer’s job to watch the past and future, right? Set up of the story has taken a turn for the better in the digital age as yesterday’s games turn into today’s emails. The conversation begins. For a Wednesday game like I was part of, Molinari and team begin discussing on Sunday. Kyle Anderson this, Justin Cobbs that, Richard Solomon karate. Both UCLA and Arizona were facing tough road challenges with a potential first place tie on the line. An Arizona loss and a UCLA win meant a very different discussion later into the game. The Arizona score was barked throughout the off-air conversations all night.

This, of course, suggests that our producer knows something about basketball. He certainly has to know about television because if he didn’t he’d look like me in that truck and we’d get a less than stellar show. So I asked him, "Michael, how closely do you follow all of this." He explained to me that beyond the obvious – you know, like producing a ton of games – he’ll watch the teams playing in his next production. Keep up with the storylines and layers. Emailing with the talent and the rest of the team helps. But he said the thing that’s helped him the most in becoming the producer he’s become (and that’s a damn fine producer) was his time with the late, Rick Majerus. He called him the greatest basketball mind he’d ever come across and that sentiment is backed by many. Molinari understood the TV side of things and could follow the game, but Majerus illuminated the nuance and finite detail, the story within the story.

On this night, however, there wasn’t much nuance to the basketball. UCLA was egregiously outscoring Cal, a fact I only become aware of once I adjusted to the unrecognizable number of voices in my ear and thirty-plus screens in my face. I was also differentiating between which screens were live action, clip editing, and the next angle, queued up for transition. And then there was the immediacy of it all, the organized chaos. Furthermore, a game like last night (blowout) magnifies the chaos. Next graphic? What’s the Arizona score? Adams this game vs. last? The Wears? The story stops telling itself, so insert the storytellers.

But here was my favorite moment. Late in the first half, facing a use-it-or-lose it timeout, Montgomery brought his team to huddle. The truck’s tone quickly rose as graphics were needed, cameras directed and redirected, and talent listened to in order to get this unexpected stoppage right. With the plays called on the court all drawn up and whistles blown, the truck was coming to a crescendo. The ball was inbounded. We were producing live sports – a waning clock - as unexpected as it gets. And inside cozy M12, nine seconds of silence.