UCLA Bruins football getting off the struggle bus in time for Texas?

While the Bruins are sitting at 2-0 at this point, their games have not looked pretty. What they need to change is below.

Share All sharing options for: UCLA Bruins football getting off the struggle bus in time for Texas?

UCLA has stumbled so far this season, even though they remain undefeated. The Bruins had playoff berth expectations at the beginning of the season, but have struggled in handling a Virginia team that went 2-10 last season and a Memphis team that went 3-9 the year before. Here, we try to figure out what needs fixing.

UCLA plays a team this week that has also stumbled out of the gate in Texas. Texas wants to make up for the beatdown Taysom Hill and BYU provided, shown in this video below, so UCLA has a few holes to plug.

It starts with offensive line play for UCLA, and it was questionable in week one against Virginia. The offensive line returned four players who had started last year, with Xavier Su'a-Filo leaving for the draft. Problems were partially assigned to starting center, Jake Brendel, being out for the Virginia matchup. Some of it appeared to be either technical or effort problems.

Here's a play, two plays into the second quarter on 2nd and 13 where Brett Hundley drops back to pass. Virginia only rushes four, with a standing defensive end providing the most pressure. The defensive end blows by Malcolm Bunche, gets a hand on Hundley, and allows for the other defensive to clean up.

When they drop into pass protection, the left tackle makes the cardinal sin of blocking; he stops moving his feet. The hesitation allows the sack. UCLA allowed five sacks and only picked up three yards per carry on the ground. Lack of continuing to keep feet moving is a big part of this. Luckily the UCLA defense stepped up to the tune of three defensive touchdowns, and escaped with a W.

It seemed like the Bruins fixed up the problems on offense against Memphis with the return of Jake Brendel. Brett Hundley had a lot more time to throw and Paul Perkins helped get the running game going a little more smoothly. The problem was the defense giving up 35 points to an unheralded Memphis squad. First thing I noticed was a problem in playcalling. While this play didn't amount to a first down, it is emblematic of a problem the Bruins need to fix. 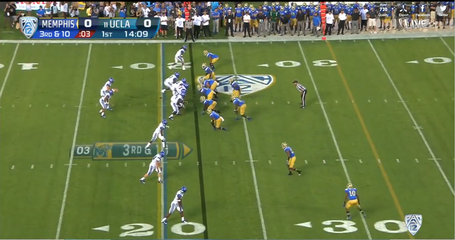 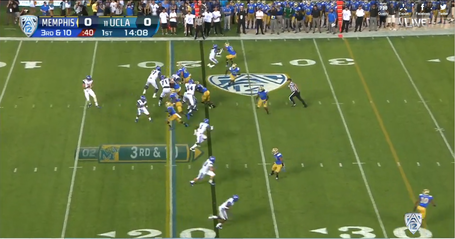 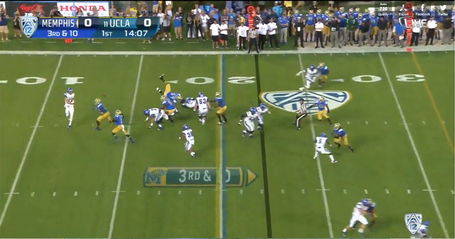 On a third and 10, UCLA dials up some pressure on the left side. This appears to be predicted by the Memphis playcaller, and the counter this with an RB screen to that side. Due to poor downfield blocking and good block shedding by the defensive back, this is stopped for a nine yard gain, just short of the first down marker. This play takes advantage of the blitz, leaving the two outside rushers unblocked and having lineman get to the second level. If properly blocked, this play could've gone for a touchdown. This scenario happened a couple times during the Virginia game as well, which means that UCLA may be telegraphing their defense, which can't happen against teams that are more poised to handle it.

The last defensive correction needs to be two-fold. The pass rush of last year does not seem to be a factor anymore, with Anthony Barr gone to Minnesota and Cassius "Clay" Marsh gone to the Seahawks. Take a look at Memphis's first touchdown drive pictured below:

There are no negative plays in this set. The Bruin defensive front doesn't get a push and can't get to the Memphis quarterback fast enough to force him into a bad decision. The last play of the drive sums up all the reasons that UCLA being marched on. 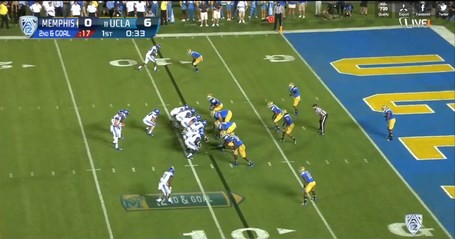 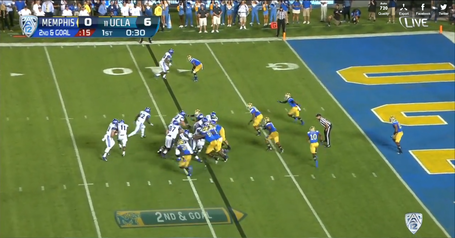 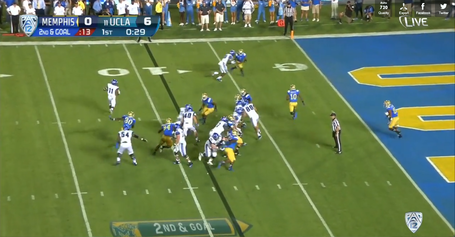 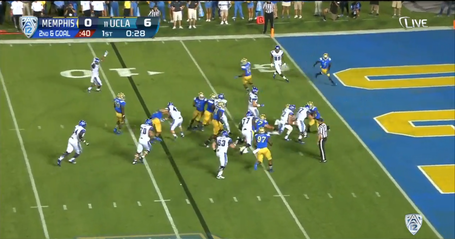 On 2nd and goal from the 8, Memphis runs a QB power. The Bruin linemen don't a good push off the snap, and the linebackers flow with the perceived power motion, following the guard. This, and the cornerback following the motion man instead of paying attention to the play, leads them just enough out of position. The line creates a good hole, the tight end and running back get solid blocks downfield, and it results in a touchdown for Memphis.

This lack of push seemed to be a recurring theme for UCLA, as Memphis only had five negative plays on the day. Three of those were penalties. The loss of their top two defensive linemen has caused a dropoff in their play, which won't help them when the Pac-12 slate turns up the intensity. Luckily for the Bruins, they have put together complete games on either side of the ball when one side isn't working. Eric Kendricks could be the superior Kendricks brother, and Brett Hundley is still a Heisman candidate. The play of both lines needs work if they hope to keep up with the lofty preseason expectations hoisted upon them.