Washington Huskies football still a bit of a hot mess

Washington came into the season with a top 25 ranking and a bonafide head coach in Chris Petersen. It's been a "meh" kind of season so far, so let's look into what the issues are.

Share All sharing options for: Washington Huskies football still a bit of a hot mess

Like UCLA, Washington came into this seasons with lofty expectations. Also like UCLA, the Huskies have stumbled out of the gate in not taking care of business of inferior competition. Hawaii and Eastern Washington put up a fight, much like how Virginia and Memphis stayed with the Bruins. The comparisons don't stop there. Both teams were stymied on offense in their first game and had trouble defensively in their second game. Again, like the Bruins, Washington needs to step up in order to handle a Pac-12 North division that is looking to be stronger than anticipated. Here's what the film is saying.

Starting with the statistics of the Hawaii game, Washington shouldn't have won. They were beaten in every single offensive category, the most striking disparity being the first downs and the third down conversion rate. The chart of this is below. 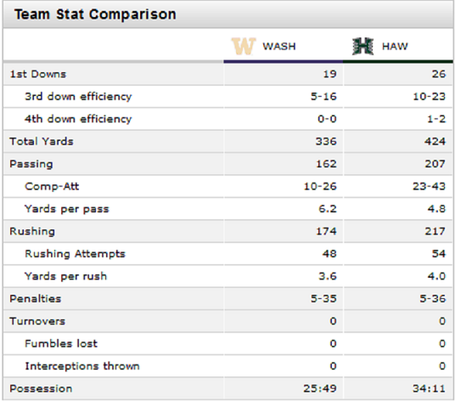 The third down conversion problems can stem from the distance to convert. Their average distance to go on third down was 6.875 yards. When you're facing 3rd and 7 on average and you're using a backup quarterback in Jeff Lindquist, success may be a bit scarce unless you have a safety valve type of target to throw to. Washington didn't appear to have one. The conversion ratio went up to 8-15 against Eastern Washington, which may speak to the change in quarterback

Let's check out a third down play from the first quarter. It is 3rd and 3, the second shortest third down Washington would have on the day. The Huskies line up with three wide to the right, a tight end to the left, and a running back to the right of Lindquist. They run a pick play, popularized most recently by the Denver Broncos using it. The outside receiver will run a go route to clear out the area. The middle receiver will run a slant to try to pick off the man covering the inside receiver. The inside receiver runs a bench under the slant and is wide open. This play is diagrammed below. 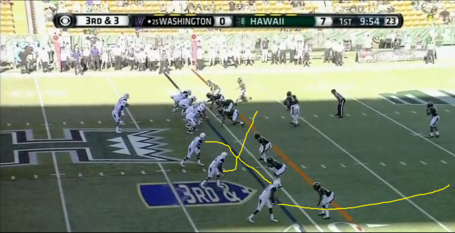 On the rollout, Lindquist misses a wide open Jaydon Mickens, and the drive ends there. The rest of the play is shown in screenshots below. (It is also starting at 15:35 in the first quarter in the link above). 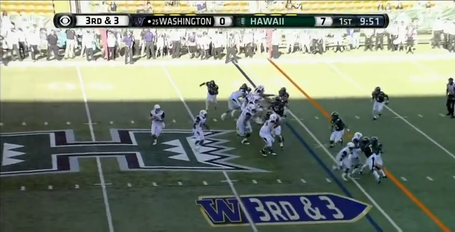 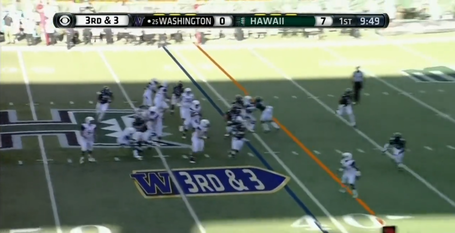 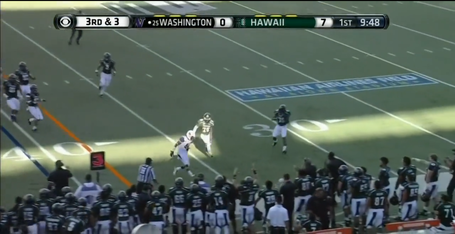 This appeared to be the status quo for Washington on that day, with easy plays that could have gone for first downs just being missed. I think some of the blame can be laid on Jeff Lindquist, as going 10-26 passing against a team that ranked 115th in total defense the previous year isn't exactly a plus.

On to the Eastern Wshington matchup. The Husky offense looked much more fluid from what I could tell. Having Cyler Miles, a seemingly more mobile quarterback than Lindquist, play gave the offense a greater dual threat. Putting up 59 points is no small feat against anyone. The problems lies in giving up 52 points to Eastern Washington on 7 touchdowns from Vernon Adams Jr. Those are numbers reserved for video games and Nick Foles against the Raiders defense. Let's take a look at the first touchdown. (Link is here)

The Eagles come out in an ace formation in the pistol with two tight ends and two wide receivers. Initial line motion indicates a run to the left, but Adams fakes the run and rolls right. This is actually a max protect play, as both of the tight ends stay in to block. The left receiver runs a deep crossing route while the right receiver runs a go route. The corners are playing man coverage, and the safeties are supposed to be playing a deep cover 2 zone. They get drawn up toward the line by the run, which ends up being their downfall. The one rule above all else for playing safety is to not let anyone get behind you, and the safeties break it. Adams places a perfect pass to his receiver, who would've been double covered if the safety hadn't crept up. You can chalk this mistake up to having two young safeties in the defensive backfield, with Kevin Cook mentally slipping up. Fixing a mistake like this comes with seeing more action at the college pace, which will come with time. If Washington wants to live up to expectations, these young safeties need to get up to snuff.

Eastern Washington's next touchdown, found here, also points out a problem with the Washington secondary. The Huskies run a dual A-gap blitz, which leaves their corners in man coverage. They also only have one safety playing center field so to speak, and this limits their ability to provide over the top help. Either the corner, Jermaine Kelly, hesitates before trying to cover the fade route or fails to disrupt the initial release off the line, and gets burned down the sideline on an easy trashcan fade. Single coverage against a fade route is going to be picked on with a confident quarterback, and without a disruption at the line or Kelly running the route for the receiver, the corner has no chance. It proves that you can't defend plays like this unless you can go full on to the jam or reading the route. Hesitation is what will allow big gains and touchdowns like this.

All in all, these problems are eminently fixable, and Illinois is a team to fix them against. With film study, a healthy dose of shame, and more and more reps during practice and games, both sides of the ball will improve. Again, like UCLA, Washington has played good games on both sides of the ball, they just haven't been in the same game. This is where Chris Petersen and his staff have to make the necessary adjustments and ream out the necessary players in order to live with the expectations he brought to this year's program.