The ups and downs of starting freshmen o-linemen at USC

Share All sharing options for: The ups and downs of starting freshmen o-linemen at USC

It's not unusual for freshmen to start in big time college football anymore. At just about every major program, freshmen are either starting or are important contributors on game day. At most schools this often has to do with the talent of the kids entering school. There might be an upperclassman set to play at a certain position, but often the potential of a young freshman can't be denied.

Unfortunately, this is not the case at USC where scholarship reductions have led to serious issues with depth within the program. That means that several young players are forced into playing often before they are ready to and that's exactly what's happening right now on their offensive line.

USC has two (two!!!) freshmen starting at their offensive guard spots and they are starting out of necessity. They also have a third who rotates in at guard. All three of them were highly rated coming out of high school and were projected to be outstanding players. All three of them would not be on the field at any other schools as highly regarded as USC if not for scholarship reductions.

Toa Lodendahn starts at left guard for the Trojans. He looks like he can develop into a great player for USC, but he also is what coaches would call "a little light in the pants". He's not physically developed enough to handle a lot of the big time  defenders in the Pac-12 and needs to add weight.

Damien Mama starts at right guard for the Trojans. He is 370 pounds and not a good 370. He was a dominating player at the high school level, but needs to get in better shape and is not ready to handle the speed of many defensive linemen at the college level.

Viane Talamaivao is listed at center on the depth chart, but rotates at right guard with Mama. He was one of the top center recruits in the nation, but he also needs to get in better shape and is not ready to play at a high level in the Pac-12.

None of these players should be playing right now for USC and it would have been in their best interest to redshirt. But USC does not have that luxury. These three need to play and they need them to play well if they are going to have a chance at winning the Pac-12 South and possibly go beyond that. They are going to have to accept the ups and downs of these three and they grow throughout the season.

There was some good and a lot more not so good from this past weekend's game at Stanford. I went back and took a closer look at the game to see how the three fared. I broke down a few plays of the bad that were a result of the three players. (Don't worry, I'll show something good after going through these.) 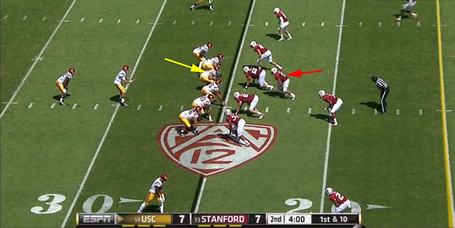 The yellow arrow is directed at Lobendahn at left guard. It's a passing play and the Stanford linebacker (red arrow) is creeping up to bring the blitz. 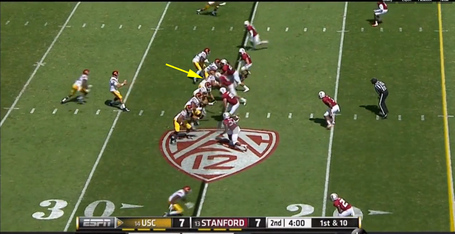 At this point everything looks fine because Lobendahn correctly picks up the blitzing linebacker. But then this is where the whole "light in the pants things" kicks in. 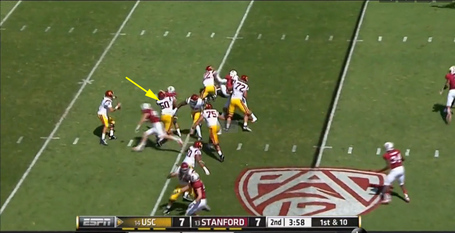 Lobendahn gets put on roller skates by the linebacker and is being driven back into quarterback Cody Kessler, who is facing pressure from the other side as well. Kessler throws the ball away, but is still in the pocket. It results in an unintentional grounding call. 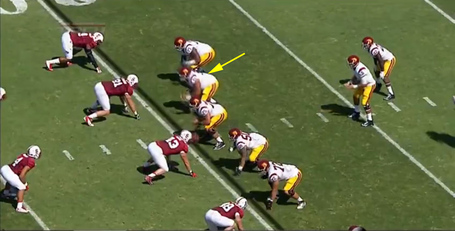 This plays involves Damien Mama lined up at right guard. It's a run play and Mama is going to be asked to kicked out the defensive tackle, Henry Anderson. 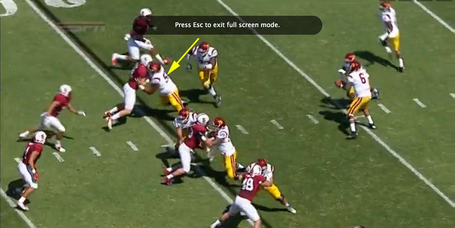 Mama needs to kick out Anderson because it's a fold block where the right tackle is pulling around and is headed to pick up a linebacker. 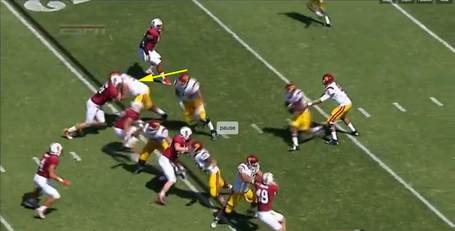 Anderson uses a push pull on Mama and is about shed him to make the tackle.

Mama is grabbing at air now and Anderson is in the backfield making the play. Anderson is a tough player for any guard to block one on one and a asking a true freshman to do so is a tough task.

Viane Talamaivao is in now at right guard. He and Mama have been rotating and he was put in after Mama gave up a pressure on the previous play. 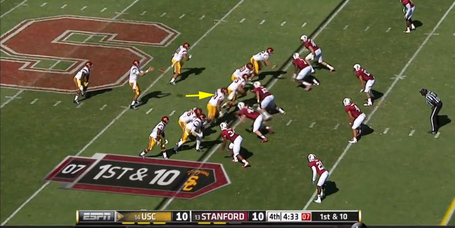 It's a zone running play to the left side of the offense. Talamaivao has to step left and make sure to get across the face of the nose tackle. It's a tough block to make, but he has to get there. 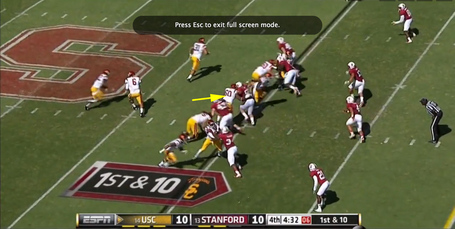 He gets there, but isn't in the right position. He needs to get his helmet on the other side of the nose tackle.

He isn't able to and the nose tackle forces running back Justin Davis to bounce it further outside. Miraculously, Davis was able to make some tacklers miss and turn this into a three yard gain, but it should have resulted in a loss of yards.

There were a lot more of these plays I could have shown, but you get the point. All of these three players had their struggles, as expected.

They also showed they are capable of doing the job at times as well.

Lobendahn and Mama are in a left and right guard. It's a stretch zone running play to the left.

Lobendahn has to reach his defender and Mama has to cut off the nose tackle for the play to succeed. 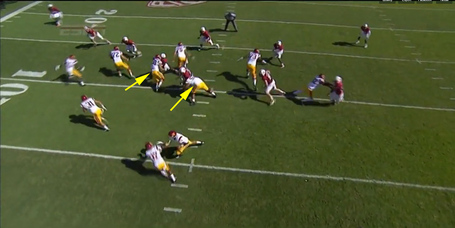 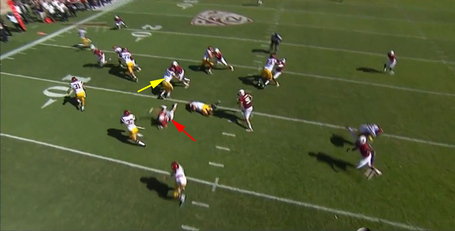 Mama gets enough of the nose tackle on the cut block to take him out of the play. Lobendahn is continuing to fight to reach his man.

Lobendahn gets the job done and the running back gets through the hole for a big gain.

USC needs to see more of blocks like this from both of these freshmen, but the point is that they are capable of doing it. Looking back at this game and the problems these three had at times, it really makes you appreciate how phenomenal Buck Allen and Justin Davis are at running back. The three freshman guards are only going to get better, but unfortunately they have to get better in a hurry if USC wants to get where they want to be this season.

It's not going to be fun to see the missed assignments from young players, but it's a reality that the Trojans have to live with.