The Ute Movement: The Components of Utah's Start

Utah has a surprising 3-0 record that even a few homers wouldn't predict. We examine why that is.

Share All sharing options for: The Ute Movement: The Components of Utah's Start

Against most odds, the Utah Utes sit at 3-0. They went into the Big House, and took down the Wolverines like the Russians in the first half of Red Dawn. How they've done this so far is multifaceted. Their rushing offense has no single star, but put over 200 yards of rushing in their first two games. Travis Wilson has been steady in leading those drives, and when playing without him the Utes have offensive issues. The pass rush has been stout so far in racking up 15 sacks and the whole of the defense has allowed 17 points per game, ranking them 18th in the country. And the biggest x-factor of it all has been transfer return man Kaelin Clay. He has three returns on the season, and pulled a Desmond Howard after his punt return against Michigan. Let's break down a little film and see how the metaphorical sausage has been made so far.

This is a name I hadn't heard in a while before the season began. Clay had originally signed with Cal in 2010, and was imagined to be the next Desean Jackson. He then proceeded to get injured and buried in the depth chart. He then transferred out to Mount San Antonio College before heading to Utah. He has always had the speed to makes plays like the one above, but the playing time at the FBS level hasn't been there until now.

Taking a look at how he's made these plays, Clay is able to use his athleticism and quick change of direction to make plays. There isn't anything special about the blocking in the first punt return, and Clay is forced to make four players miss. His blocking downfield forms the makeshift picket fence after he makes the other players miss. At that point it's easy money for him. The kick also didn't hang that long, which aids in the return. The kick return is more of the same, with better blocking. Only three men get a hand on him as the return team sets up for a return down the left sideline. The front line of the return team blocks well, so even though the blockers initially in front of him either only get a chip or whiff on their blocks, Clay can still get free for the return touchdown.

The return against Michigan is more of the same, the gunners don't get blocks on their men, but the defenders overpursue, evoking memories of Desean Jackson's return on Matt Dodge and the New York Giants. Blocking is decent enough downfield to spring him, and the punt again doesn't have any hangtime. Clay might be the most dangerous return man in the conference, with Ishmael Adams being his biggest competition after his return against Arizona State. This can translate into more touchdowns for Clay, or better field position from those who try to punt away from him.

The Utah pass rush has gotten them at least four sacks each game this year, with seven coming against Fresno State. From film that I watched, their ability to get to the quarterback quickly while using pressure from the linebackers is a key. Jared Norris was a beneficiary of bringing this pressure, picking up a couple of sacks against Michigan with his speed being on full display. Let's take a look at a sack from the Michigan game. 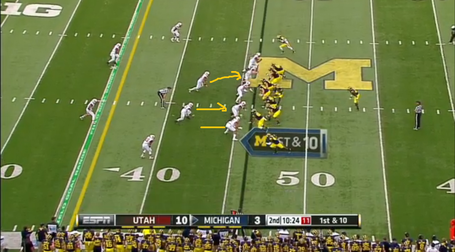 As seen above, the Utes put five men on the line, but the bottom defender drops back to cover. The linebackers rush on a double b-gap blitz, in the gap between the tackles and guards. Doing this leaves the defensive backs in a cover 0, man coverage all the way across. Without a quick pass rush, Devin Gardner could get off a quick pass ostensibly. 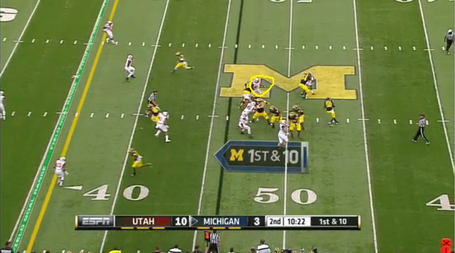 The pressure here is twofold. First the topmost defensive end does his job to contain the pocket, keeping Gardner from escaping to the outside. This forces him to step up to avoid the pressure. This leads him right into Norris, circled above, who has gotten a step on the guard and gets to Gardner. 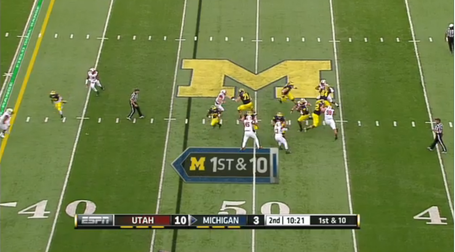 Utah's pressure comes from blitzes from all over the defensive formation. Later in the game, a blitz from safety Tevin Carter got a sack for defensive end Nate Orchard. Being able to produce that pressure without sacrificing pass defense allows this defense to have as much success as they are currently having.

Travis Wilson and the Rest of the Offense

Travis Wilson has been able to make solid plays so far this year, and has shown the ability to come back from a hit that make you think he broke his neck. Regardless from that gnarly play, he gets his receivers the ball and make the right reads. On the first drive against Fresno State, he made a solid play. 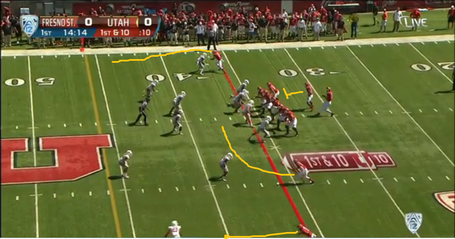 Outside receivers run vertical routes, while the sole inside receiver runs a drag. They keep the tight end and running back in as extra blockers. Even without the extra receivers, Dres Anderson gets an opening and Wilson makes the right read in throwing it deep. He does float the ball a little too much but it gets to his target for a 41 yard gain. 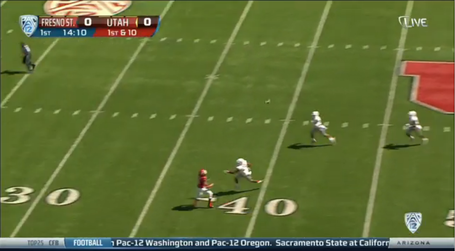 Wilson threw for five touchdowns in this game before being pulled midway through the third quarter. He also came back into the game against Michigan after Kendal Thompson threw a pick six that tied the game at 10. The touchdown drive that broke the game open was set up by a 33 yard return on the kickoff by Clay and a run play which up to that point in the game had been lacking. 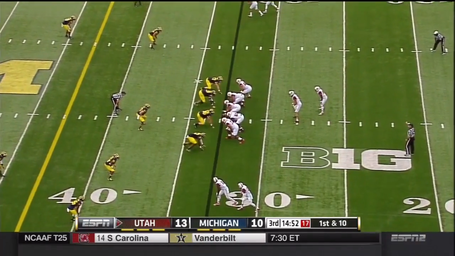 They start this drive in a four wide set with receivers stacked. This leaves only five men in the box, which Utah takes advantage of. They run a read option, and Wilson hands it to Bubba Poole. They manage to freeze the defensive end, circled below, for long enough to let Poole get through the hole unscathed. 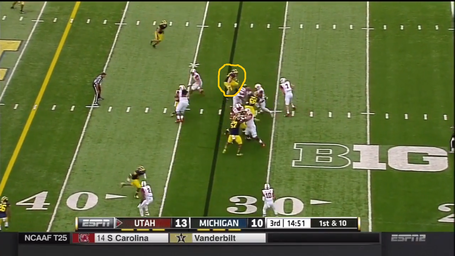 This leads to a 24 yard gain, getting the Utes well into Wolverine territory. 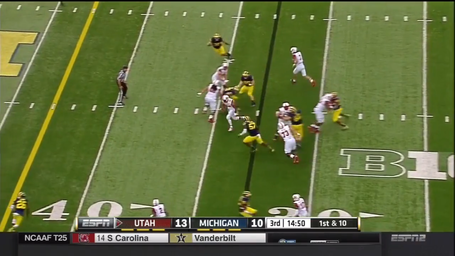 The threat of the zone read with Wilson makes a huge difference on this drive, and brings that dimension to the Ute offense. Michigan had to be more worried about the potential quarterback run, and didn't want to blitz for fear of being exploited. This allowed Wilson to sit back a few plays later, hit Dres Anderson on an easy crossing route and watch him score.

Like many others, I'm not sure what to make of Utah's start. They are definitely solid, but Michigan isn't Schembechler status, Fresno State's Carr went to the impound lot (Oakland), and I didn't know Idaho State had a football program. They are solid however, and have a myriad of threats to any team they play. I think they take care of business this weekend against Washington State before they head to the Rose Bowl to face their first real test of the season. Brett Hundley looked every bit like the Heisman candidate he's been put up to be in a thrashing of a good Arizona State team, and UCLA has some solid defensive backs in Anthony Jefferson and Ishmael Adams. I think Utah can have a good chance if their defense remains as sack happy as they've been. Kyle Whittingham has put together a solid team, and now we get to see what heights they can reach.