Oregon Ducks vs. Michigan State Spartans: Get Hyped for Flash vs. Smash

In what will be the highest caliber non-conference game of the year, No. 7 Michigan St travels to Eugene to take on No. 3 Oregon in a good old-fashioned clash of flashy offense vs shutdown defense. Flash vs. Smash. Speed vs Strength. Uncontainable Offense vs. Annihilating defense. On Saturday, all eyes will be in Eugene.

Share All sharing options for: Oregon Ducks vs. Michigan State Spartans: Get Hyped for Flash vs. Smash 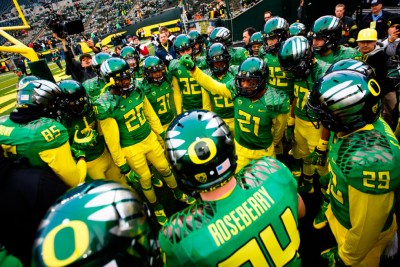 I got like five more of these. Basically this is going to be a pretty spectacular game. A showdown of this magnitude doesn't happen very often in college football, much less in September. This non-conference clash matches the top ranked Pac 12 team against the perceivable favorites out of the Big Ten, following Braxton Miller's injury for Ohio St. No other non conference game will shape the landscape of the college football playoff quite like this one, with the winner positioning themselves on the fast-track to one of the 4 coveted spots in Pasadena next January. Here's a couple of key numbers for the game. 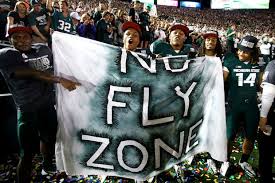 This game has received a lot of hype and rightfully so. It is incredibly rare to see a clash of this magnitude. The fact that the Rose Bowl is losing some of its luster with the new Playoff, the Pac 12-Big Ten clash has been diminished and gives this already giant game even more meaning. Fans of the two historic conferences will get a satisfying "Rose Bowl" in September when Michigan St comes to Oregon this Saturday.
The Flash vs. Smash is the most popular storyline, pitting the exciting up-tempo Oregon Offense along with their new helmet and never-wear-the-same-uniform twice showy style against the grind-it-out running game and smashmouth defense of the Spartans. Mark Helfrich has been the brains of the Oregon Offense for years and now as Head Coach has shown his relentless up-tempo offense, complete with early game two point conversion attempts.
Oregon looks to score fast, and it's not uncommon for them to have 4 or 5 touchdowns in the first quarter. Mark Dantonio and Defensive Coordinator Pat Narduzzi have been together for over a decade, and have pieced together an incredible defensive scheme. Even without the blue-chip recruits they have been able to produce elite defenses year in and year out, and while they replace several key names from last year's defense, this year looks to be no different. There will be no shortage of excitement when the Ducks' offense is on the field. With the all the hype of the Oregon O and the MSU D, Michigan St Coach Mark Dantonio wants to remind us that that only makes up half the game.
"This will be about our offense versus their defense and special teams, as well, and to sit there and say that this is just about their offense and our defense would be a big mistake," he said. "This game will be about turnovers, this game will be about field position relative to special teams, about big plays or lack thereof on either side and certainly their offense and our defense plays into that. But we're going in there with 80 people. All 80 have to bring something."
Yeah, yeah, yeah. We know we can't just watch when Oregon has the ball, although it's not the worst idea in the world. Certainly there will be a lot to watch for on the other side as well though. How will the Oregon Defense contain QB Conner Cook, who went 12-13 for 285 yards and 3 TDs in the opener vs Jacksonville St in just one half?

How effective will Oregon star CB Ifo Ekpre-Olomu be after coming out with an ankle injury against South Dakota? Will Michigan St RB Jeremy Langford be able to run on Oregon like Stanford has the last two years? While MSU defense and the Oregon offense will be overshadowed by their more famous counterparts, those possessions will carry just as much weight in deciding the outcome of this match up.
It's going to be a good one. The winner puts themselves in position for a national title run and brings pride to their conference. The loser is at the mercy of the 13 man playoff committee.
I gotta go with my gut on this one, and I think we'll actually see both offenses show up and get to see a shoot out.
Oregon 42-35.
Date: Saturday, Sep. 6