The Bruins offense learned from their sloppy win over Virginia, but the defense still has a lot of work to do.

After last week's narrow victory over Virginia, we expected UCLA to bounce with a huge victory of 21-point underdog Memphis at home in the Rose Bowl.

The Bruins held on to beat the Tigers in a tightly-contested game at the Rose Bowl, 42-35 on Saturday night. UCLA's offense finally hit the ground running after being outgained in Week 1 by Virginia, the only problem was the defense didn't follow suit. Memphis racked up nearly 500 yards of offense behind Paxton Lynch's 300-yard performance through the air, keeping the Tigers in the game for almost all 60 minutes. The drive chart is more aesthetically pleasing to look at compared to last week. 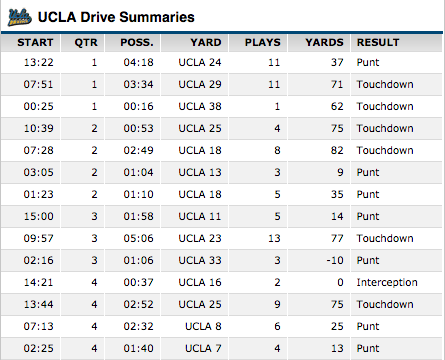 See? There are actual offensive touchdowns on here. Still a lot of punts, but that was against one of the better defense of the AAC.

Here are a couple of thoughts on the Bruins performance at the Rose Bowl on Saturday night:

The front line's struggles continued against Memphis, giving up 4.0 sacks to the veteran Tigers front seven, bringing their season total allowed to 9.0. Brett Hundley was able to get the ball out of his hands quicker and move the ball up the field for the Bruins, but pressure still came from all sides from the Memphis rush. The rushing attack had a solid outing with 3.5 YPC behind Paul Perkins near-100 yard performance, but there still needs to be improvement if the offense hopes to be more efficient the rest of the year.

Hundley needs more protection. Period. If he can't get more time in the pocket against Texas, or the rest of the year, the offense will struggle for consistency in 2014.

Despite having big weapons like Myles Jack, Eric Kendricks, and Kenny Clark in the front seven, the group has yet to make a big splash on defense this year. The Bruins have just 1 sack and zero QB Hurries through two games against some mediocre offensive lines. Again, there have been some bright spots in the play of Jack and Kendricks, but those two alone can't carry all the weight of the Bruins pressure this year.

They may finally have a big opportunity against a Texas offensive line that had a combined four starts up front vs. BYU last week, and could possibly lead UCLA to their first convincing win of the season.

3. Brett Hundley is still one of the best QBs in the nation

After a shaky start to the year against Virginia, Hundley kept the UCLA offense ahead of Memphis and lead the Bruins to victory behind a big near-400 yard passing performance along with three touchdowns. Saturday's outing put him at 638 passing yards on 68.8% completion on the year, just over his mark of 67% from 2013. Pocket collapses and a lack of protection have impacted the Bruins offense a lot so far, but Hundley has kept UCLA above water and is far and ahead the best player on Jim Mora's roster. If the front line can give him just a few more seconds worth of protection to work with, we could see Hundley at his best against Texas at Jerry World this weekend.

UCLA travels to Dallas, Texas to take on Charlie Strong and the Texas Longhorns at Cowboys Stadium this Saturday with a 5:00PM PST kickoff.