Oregon is one win away from destiny.

In 15 spectacular minutes, they vanquished all of that talk and paved their way to the national championship game.

For a month, Oregon knew they were getting the defending national champs. Even though they'd come in hot and were plenty brilliant in every one of their wins, there was still a great deal of uncertainty as to whether the Ducks could deliver when the lights were on (even though they were on against Michigan State, and UCLA, and Stanford, and the Pac-12 championship and the Fiesta Bowl 2 years ago, and the Rose Bowl 3 years ago, and ...). Their ruthless machinations  in conference play didn't seem to matter, because hey it's just the Pac-12 right?

There was an aura around Florida State when it came to victories. They might not be the mighty Seminoles that conquered college football in 2013, but they hung around and won close and tight against any foe good or bad. It wasn't pretty or exciting and inspired fierce debate about their merit, but FSU was the lone team of the semifinalists to come in undefeated, and that was more than good enough to get them a spot. The fear in everyone's mind was that the Seminoles would turn it on when the moment came, and it would be enough to pull them over the top.

However, coming from behind against N.C. State and Florida and Boston College is one thing. To do it against an Oregon team led by Marcus Mariota that has been fine-tuning its craft for a decade running was sheer folly. 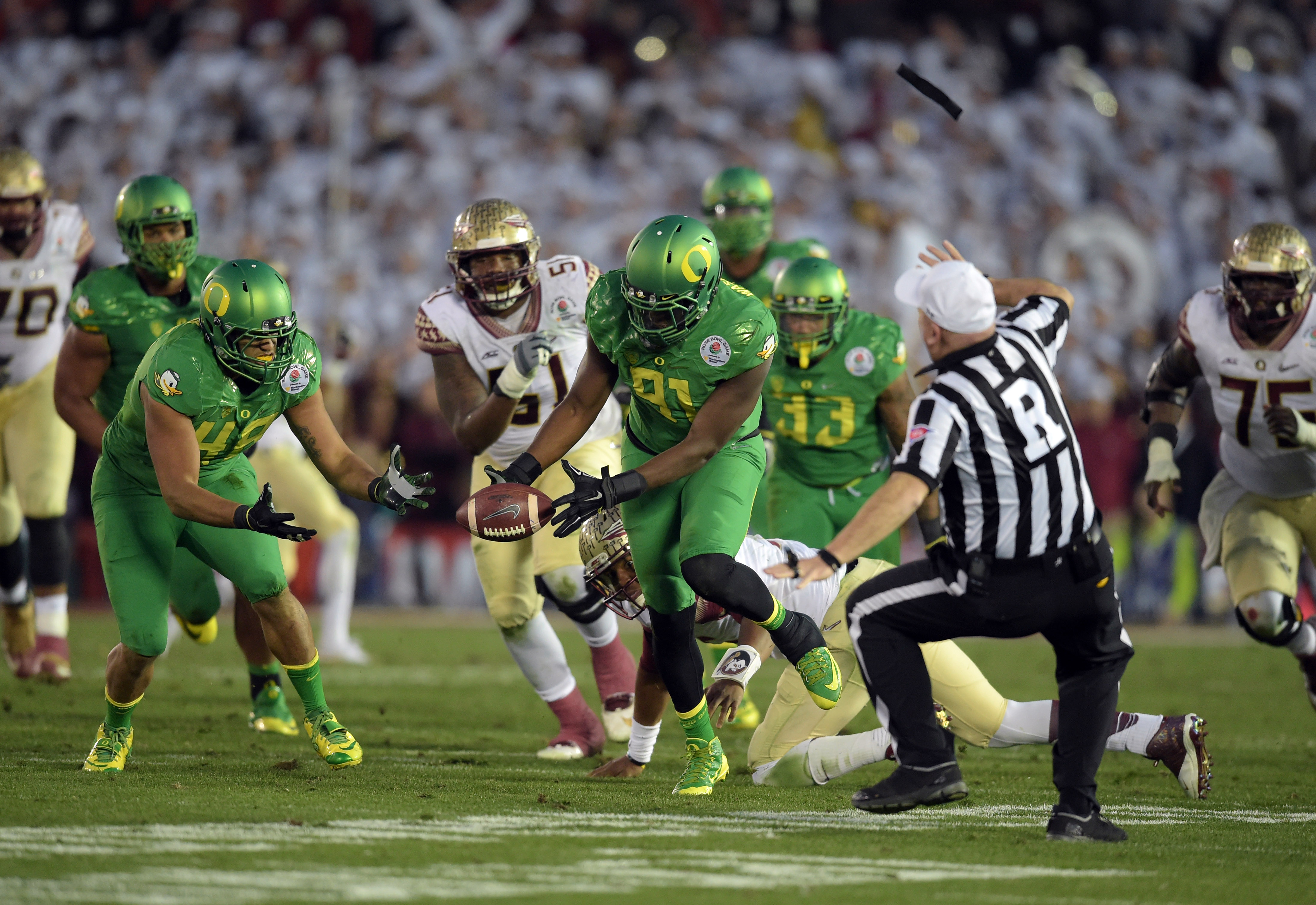 The Seminoles blew their chance to really take control of the game early as the Oregon defense bent plenty but did not break. They turned two red zone opportunities into three points.  The Seminoles defense was able to get a 3-and-out on the first drive and a turnover on downs early in the second as well as a pick before halftime, but Florida State could turn that into only three points.

As for Oregon, they started punishing Florida State pretty much everywhere and anywhere. They went through the tackles. They cut outside and attacked in space. They found the creases to make moves in open field. The Ducks took the lead early in the first quarter and the Noles could not seize it away from that point on. Looking up against Oregon is a much tougher vantage point for an opponent, especially if you haven't taken their best shot yet.

Florida State might have mastered the second half comeback this past year, but no team has mastered second half adjustments like Oregon has. The Ducks didn't just create plays on offense, but brought almost all of their points off of defensive turnovers. As they tend to do, Oregon has now ramped up run after run every game this year and separated themselves from their opponents with periods of prolonged dominance.

And it happened again.

One devastating turnover after another came leaping Oregon's way. The Ducks forced some nasty fumbles, pressured Jameis Winston and made him uncomfortable in the pocket just enough times. After every FSU mistake, Oregon capitalized immediately. Each score seemed to shatter Florida State's immortal shield, and by the time Winston was backpedaling the football back into the hands of Tony Washington, the Seminoles were dead men walking.

And they shattered all the stereotypes along the way.

They're not tough enough. Oregon's offensive line has long been harangued for its inability to hold back elite front sevens in the past. Stanford blew them up the past two years and SEC powers like LSU and Auburn did their best to keep them in check. But the Ducks have been working to fix these issues the past four years via recruiting, and it looks like they have the winning formula.

Florida State's elite (albeit inconsistent) defensive line had very minimal impact in this game. Oregon didn't make overpowering blocks, but were just technically proficient for most of the game. The Ducks picked up regular gains, then some big gains, then by the 3rd quarter had the Seminoles worn out.

They're not strong enough. Oregon didn't have the running backs in the past to really power past elite athletes. Taking advantage of space and speed had been their calling card, and it had been a weak point of Oregon in previous seasons. Oregon didn't have a powerback that could break tackles and get those extra yards in a crucial situation.

Enter Thomas Tyner and Royce Freeman. Freeman came in heralded as the big powerback and made some huge short-yardage gains. It was a healthy Tyner who made all the difference, launching himself into the tightest corners and wrecking Florida State with one drive after another.

They can't win with pace. If Oregon couldn't produce points against elite defense, it would be difficult to beat a team that can control the game with time of possession (i.e. the Stanford formula). Oregon used all the pace they could get their hands on to roll past Florida State's defense, as they were worn all the way down by the 3rd quarter. The Seminoles got frustrated, had trouble getting their subs in and off the field, didn't have the proper splits in place along the line, and Oregon blasted them off with relentless execution. The Ducks couldn't set enough Rose Bowl records.

They can't stop a talented team. Coming into the game, Florida State was considered the more talented team by a significant margin with all their incredible four and five star talent. The Oregon defense has always been considered the ugly stepchild of the Ducks offense because they seem to always have one gaffe each season, but they're always underrated in their effectiveness. They have proven to be strong enough to get the crucial stops. Tony Washington was the best lineman on either side of the ball, and he made his presence known all night long.

They're gimmicky. No everyone. Mike Stoops winning a bowl game is gimmicky. Brock Osweiler winning a game with his legs is gimmicky.  Oregon has been doing and winning with this gimmick for a solid half-decade. And they now have great recruits at every position. With a player like Mariota leading the way, the so-called gimmick is now simply a Duck fundamental. Score early, score later, score often, then score some more.

They don't have the coaching mettle. Mark Helfrich and Don Pellum outschemed Jimbo Fisher and his comrades all game. Darren Carrington had an amazing game as the Seminoles keyed in on Marcus Mariota. The Oregon defense had no Ifo Ekpre-Olomu and Rashad Greene was still put on lockdown for most of the game. Helfrich is the only coach in the semifinals who had never won a national title and issued the most impressive performance out of all four. It's a good start to the playoff run.

They're soft. Kirk Herbstreit talked about it plenty post-game, but how can anyone call Oregon soft? The Ducks have lost a total of TEN games in the past six seasons, a record mirroring the success of any big college football program (yet when USC puts up similar win-loss records, people marvel at their historic run. The Pac-12 has arguably been the second best conference in college football and is very much challenging for first this season, and Oregon still is finding ways to dominate their conference aside.

Ultimately, it takes winning on a big stage to dispel these myths, and on Thursday night in Pasadena the stereotypes look like they're starting to get buried for good. With one more win, Oregon can join the rest of the powerhouses permanently and almost certainly never have to worry about them again.