After ASU capitalized off of an early Oregon fumble, senior Kenjon Barner stole all of the momentum back with a 71 yard dash through the middle of the ASU defense. Here's a look at one of Oregon's offensive staples, the power play.

The power play was a huge part of Oregon's game plan when they travelled to the desert to dismantle the ASU defense. To start the game, Barner busted a huge run, and a tip-drill catch by Rob Beard gave the Ducks an 8-7 lead. The rest was history. 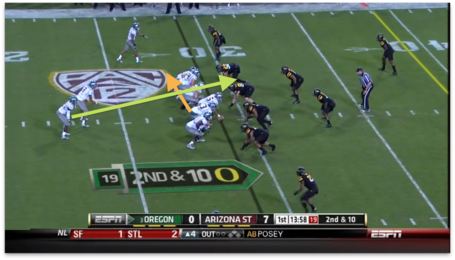 A typical power play involves "down-blocking" (or blocking towards the center), and a "pulling blocker" designated by the orange yellow as shown above. Barner's path is right behind the left guard.

By simply looking at the numbers, Oregon has a huge advantage as the Ducks will have five playside blockers to ASU's three defenders. 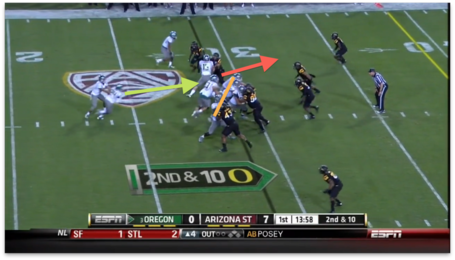 When the ball is snapped, the play develops perfectly, as a wall (orange line) is formed perfectly in front of the pulling guard, who plans on turning up the hole to get the "spring" block on a linebacker (the middle of the three defenders on the second level). At the top of the screen, the receiver intentionally lets the corner back "go" in order to block the deep safety on the 35 yard line.

The most important block at the line of scrimmage is showcased in between the two arrows. Colt Lyerla is responsible for sealing the edge and is left all alone to block the defensive end. He stays in front of his man, and allows Barner to break into the second level. 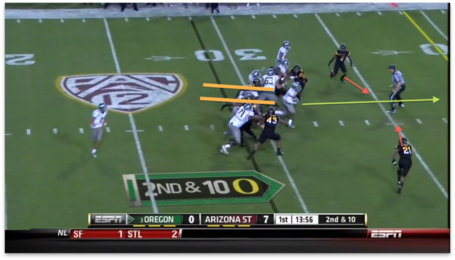 The crease may have been tight, as shown by the orange lines, but Barner navigated the line perfectly and found himself in a perfect position to rack up solid yardage. For many teams, this play would have ended as the safeties would head off the ball carrier. Can Barner split the safeties and head to the endzone? 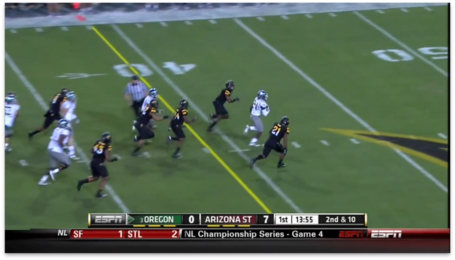