Is this Arizona's year?

For those who want an idea of the path each team must tread to win March Madness, let's take a look at the bracket below.

Arizona: No. 1 seed in the West Region

Arizona starts in San Diego with a pretty interesting matchup against #16 Weber State. Although it will be a home matchup for the Wildcats, they might be a little worried about having to face a team that can light it up from outside. Next up is the Gonzaga-Oklahoma State winner, both of whom are dangerous on any given night. If they can get pass the traps, the Wildcats really have to like their Final Four odds, with Wisconsin and Creighton not on the horizon until the Elite 8.

UCLA: No. 4 seed in the South Region

Arizona doesn't get the best draw of the first week though. That honor goes to UCLA, who will be facing the easiest possible road to the Sweet 16 in San Diego. The Bruins will be playing two virtual home games against Tulsa and the VCU-Stephen F. Austin winner. Then things ramp up with a potential Sweet 16 battle with Florida.

Oregon: No. 7 seed in the West region

The Ducks get a very difficult draw in Milwaukee. First they have a rematch with a BYU team that will feel disrespected by all the heat they're getting for such a high seed. Then they will likely have to battle the Badgers. But if they can pull off that monumental upset, suddenly the bottom half of the bracket opens up for a charge to the Elite 8.

Colorado: No. 8 seed in the South region

Colorado gets the seed of death. First they must play Pitt in Orlando, and if they survive that they battle Florida. This is the toughest of draws for any of the Pac-12 teams. At least they aren't on the other side of the bracket like another Pac-12 team.

Arizona St.: No. 10 seed in the Midwest region

The Sun Devils have to feel slightly good about winning their first game against Texas, but after that lies a wonderful slate of Michigan, Duke, and anyone from Wichita State to Louisville to even Kentucky.

Stanford: No. 10 seed in the South region

Johnny Dawkins must be really happy to get into the tournament, because he might have a hard time getting very far in his side of the bracket. New Mexico, Kansas (both of the first two in St. Louis), Ohio State or Syracuse, with Florida or UCLA probably looming at the end. 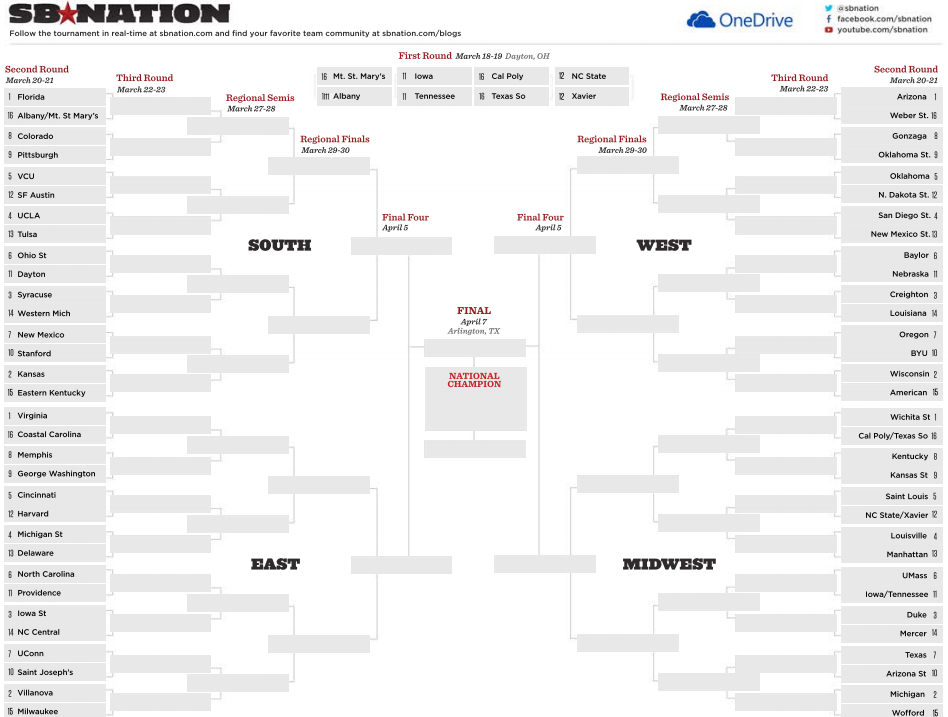