1. Civil War expectations: It's strange to think that the Oregon Ducks and Oregon St. Beavers faced up in a Civil War that didn't quite devastate one team or elate the other, but that's what it felt like.

Oregon wrecked OSU as expected, eventually taking advantage of Beaver mistake after Beaver mistake. The Ducks overwhelmed the Oregon State defense with run after run, eventually dissecting the Beavers on the ground without much difficulty. Oregon still owns their rivals in Washington and Oregon State, not having lost one game to either team since 2007.

But Oregon has to feel like they let a golden opportunity slip through their fingers a week ago in Stanford. Their best chance at a national championship was three wins away and they couldn't make it happen. That will be tough to swallow, even with a win over the Beavers.

The result is a Fiesta Bowl matchup, most likely (ironically) with Kansas State. Four BCS bowls in four years isn't so bad.

2. Oregon State satisfied with their season: On the other side, the Beavers conclude a very satisfactory season, finishing up at an excellent 9-3. Considering where they were a season ago, this is definitely not so bad at all. They beat the Pac-12 South champions, nearly beat the Pac-12 North champions, upset Wisconsin, and took care of business for the first half of the season.

Unfortunately, good seasons or bad seasons under Mike Riley seem to always end the same way: A blowout mauling at the hands of Chip Kelly's Ducks. The Beavers have given up an average of at least 360 rushing yards to the Ducks in the last five Civil Wars, which make it pretty difficult to keep up for long. Oregon State is going to have to figure out how to stop the Oregon attack at some point if they ever plan on being competitive long-term.

Still though, nine wins. Much better than the last place projection many Pac-12 reporters gave them back in July.

3. Chip Kelly curtain call? Could this be it for Kelly in Oregon? Four BCS bowl appearances and three Pac-12 championships, it sure does seem like he's in need of greater challenges.

Kelly was surrounded by state troopers, who pushed people out of the way, and blocked for him, and formed a running human wedge that looked like a kickoff return headed out of the stadium and off toward downtown Albany.

As the Oregon coach and his blockers blew by some of the Ducks players, they panicked and began to run as well. "Why we runnin'? Why we runnin'?" corner Ifo Ekpre-Olomu said. And the answer came from a weary teammate, pushing up the hill, "Because coach Kelly is running."

Today, I wonder where this Kelly run stops.

4. Oregon: Matt Takimoto of Addicted to Quack touched on the run game.

Oregon returns to form in a big way in the 2012 Civil War, rushing for a season-high 432 yards and scoring the last 28 points of a 48-17 win over Oregon State. Kenjon Barner led the way for the offense, rushing for 141 yards and a touchdown in the first half, before leaving with an apparent rib injury. He returned in the second half, and finished the game with 198 yards and two scores. This game also featured De'Anthony Thomas best overall performance as a running back, rushing seventeen times for 122 yards and three touchdowns. In the passing game, Josh Huff and Will Murphy combined for 103 yards on eleven catches, and Marcus Mariota was his usual hyper-efficient self.

5. Oregon State: Figgi4Life of Building the Dam talked about the turnovers.

Oregon did to the Beavers what they'd done to countless opponents in the past, pulling away in the second half, and taking advantage of mistakes. The Beavs turned the ball over 6(!!!) times, all in the second half. Sean Mannion threw 4 INT's, and the other two turnovers were on special teams disasters. The Beavs were surprised by a squib kick, which they fumbled and the Ducks fell on, and Markus Wheaton tried to make a diving catch on a punt, which didn't go well, and was also fallen on by the Ducks.

6. The BCS baseline: Our own Josh Schlichter talked at FishDuck about the changing paradigms of what is considered a successful season at Oregon.

When Oregon lost control of its destiny, the odds were stacked against them, and at the end of the day, the teams that executed when it mattered the most will enjoy the rewards of their success. As Oregon’s magical season wraps up, the idea of an at-large BCS bowl bid has turned into somewhat of a consolation prize for the Oregon fan base. Perhaps it indicates arrogance, or perhaps it indicates a true landmark of the changing culture in Eugene.

As Chip Kelly’s future at Oregon becomes more uncertain with every passing day, there is no doubt in my mind that Oregon’s football program will stay the course, and remain in the national title conversation for years to come.

7. De'Anthony Thomas and Jordan Poyer had some shenanigans. You'll see their entanglements here.

Jack Follman argues that Thomas deserves punishment, but it does seem like the officials did a poor job of blowing the play dead and Poyer seemed to be twisting at Thomas's ankles. What's your interpretation?

8. Video highlights of the Civil War. Oregon runs the football a lot here.

9. Oregon uniform review: For some reason, I really want a Mello Yello. 10. Your Civil War image of the week! 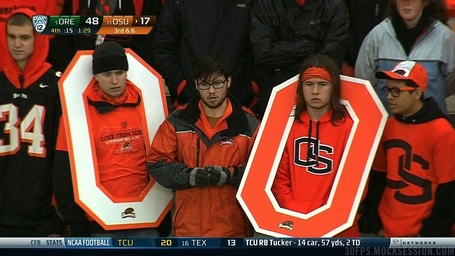 Fiesta: Oregon.
At 11-1, with a top-five ranking and their rabid following, the Ducks are an easy pick.

If Stanford loses to UCLA in the Pac-12, knock Oregon State down to the Holiday Bowl.

12. Tweet of the game courtesy of our own Dan Rubenstein!

Beavers muff it. You have no idea how long I've wanted to write that.