Lane Kiffin has a lot of playcard spinning to do this season after the USC Trojans wrapped up a colossally disappointing 7-5 season with a loss to Notre Dame.

1. It's going to be a long offseason for Lane Kiffin.

The USC Trojans went from being the preseason national title favorites to losing four of their final five games, conceding their two biggest rivalry games and getting toasted on multiple occasions. USC got shut down by Stanford. They could not come close to shutting down Oregon. They spotted 24 points to UCLA and blew a two touchdown second half lead to Arizona. And they almost never, ever scored in the third quarter (they outscored two of 12 teams in the third quarter this season).

The final game against Notre Dame seemed like an ode to Kiffin's adaptation as the de facto offensive coordinator. Once USC ran the football successfully, they decided to throw. They called timeouts to set up a play to run the ball up the middle and throw what looked like a seam route to beyond the end zone. And of course there is that epic three minute drill the Trojans ran from their own goal-line, capped off by the dumbest of dumb 4th and goal playcalls you'll ever see.

Kiffin obviously was working without Matt Barkley, who could have made a decent difference in this one. But USC still had plenty of chances to take this one, and Kiffin never really put his team in a position where they could win.

Once again, this is all on Lane Kiffin.

We knew what we were getting with Monte, we have seen that all season. But Kiffin, once again folded like a cheap suit.

No Adjustments, poor clock management...and those play calls with USC on the 1-yard line.

I remember Matt Barkley's comments earlier in the season about Kiffin treating the play calling like a video game.

Matt was right, it is a video game because Kiffin has no sense of reality in his play calling.

I mean, really? Did Kiffin not watch any film of ND? Did he not see how ND stuffs the run inside like they did against Stanford?

It really does look like a video game out there.

4. Notre Dame fan reaction: Mouth of the South talked about the Irish defense on One Foot Down.

Defense. Five stops inside the four yard line. 167 yards and one touchdown for the best receiving duo in the country. Yet another opponent held to their season low point total. And a two-score win over SC. I cannot say enough about this defense. Bring the hammer to the SEC, boys.

5. The perplexing status of Lane Kiffin, via Bill Plaschke of the Los Angeles Times:

The only Trojan who truly sprinted off the field was Kiffin. But one person he apparently will not have to avoid is Athletic Director Pat Haden, who last week told me, in this column, that he is backing Kiffin "150%."

Considering that Kiffin has led the team to four losses in its last five games — including the unthinkable double defeats to UCLA and Notre Dame — this decision will continue to puzzle many fans, who walked away Saturday night thinking mostly about those eight snaps.

"You'd like to think that that many snaps, you could score a touchdown," Kiffin said.

You'd like to think that with this much talent, USC would not be 7-5.

5. Could this be the final game for Dad? Lane is almost certain to be back, but I'm pretty sure the Trojan fanbase will revolt if he brings back Monte Kiffin. Rich Hammond of the Orange County Register has more:

Bet on changes being made. Notre Dame's offense, not exactly considered a dynamic unit, put up 439 yards on USC, which did not force a turnover. The Trojans' defense started slow, as has been its habit in many games this season and USC was unable to completely rally from a 10-0 first-quarter deficit.

The smart money is that Kiffin's father, Monte, the assistant head coach and architect of the defense, will either retire or take a different job that doesn't directly involve coaching. Monte Kiffin turns 73 in February and teams, either with spread or conventional offenses, often moved the ball with ease against USC.

7. Image of the week (via Mocksession) 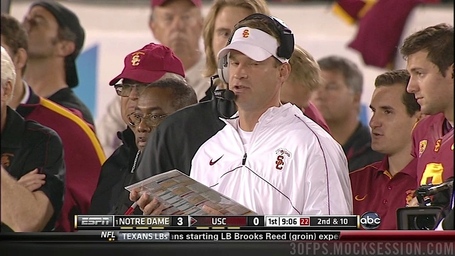 8. Video highlights, with a progressive tilt toward Notre Dame for some reason. Did they do something important?

9. Stat of the game? Down ten points with six minutes left, it took three minutes for USC to run eight plays from the two-yard line and end up with no touchdown. 10. What's the opposite of the Bush Push? Let's see, it's 4th and goal. USC could kick the field goal here and still have a decent chance at coming back, while missing here essentially ends the game. However, Kiffin seemed determined to do easy things the hard way.

How about ordering up a 4th and goal playaction pass to a fullback who struggles to catch passes?

11. Max Wittek at least showed promise, and looking ahead for USC, he'll have to be part of the solution.

Wittek completed 14 of his 23 passes for 186 yards. He threw for a touchdown, and he tossed two interceptions (only one of which was truly a mistake). Those certainly aren’t spectacular numbers, but, under the circumstances, this was a performance that suggested more promise than peril for this program.

When it was over, Barkley, whom Wittek has known for about six years, put his arm around his understudy and told him how proud he was.

"I don’t regret anything at all," Wittek said. "Obviously, the circumstances of Matt not being able to play in the game is what really sucks about it."

12. Unfinished business. USC now gets a great shot to win the first ever Sun Bowl in team history.

Dear Sun Bowl: USC fans are not going to El Paso. Sorry. We will watch it at home.

Just so everyone sees what happened this year, @lane_kiffin took a team with National Championship talent to the Sun Bowl. Impressive. #USC