The Washington Huskies have had their problems to start 2012, but they're wrapping up this season with a flourish.

Who are your top performers from Washington's game against Colorado? What were the most critical factors for the Huskies to achieve victory?

Gekko Mojo, UW Dawg Pound: It is always hard to judge who were the top performers after a titillating affair with the Buffs, but the Defense was the story for the Huskies (again) and, if you break down the playmakers in the game, your attention gets drawn immediately to a pair of frosh: Travis Feeney and Shaq Thompson. Both are budding playmakers who have a nose for the football and whose collective speed just pops out as you watch them close gaps during live action. As both of them technically play linebacker, there is quite a lot of hope that these guys, combined with Sophomore John Timu, are going to be the heart of an emerging defense for a few seasons to come.

Jack Follman, Pacific Takes: Keith Price on offense and Travis Feeney on defense. Price finally made almost all of the passes he needed to and Feeney was a monster on run defense. The most critical factor was the defense making sure that Colorado never got a big play in the first half, because the Husky offense left the door wide open to have Colorado make it a game but the Husky defense wouldn't let them.

Talk about the Apple Cup, and your feelings about your in-state rivals Washington State.

Gekko Mojo, UW Dawg Pound: UW is a bit unusual in that it has two natural rivals in WSU and Oregon. Each Husky fan has his or her own reasons for sports-hating one more than the other and it is usually 50-50 when you poll the fanbase. For me, the Apple Cup is the more enjoyable rivalry because it lacks some of the deeply personal animosity that exists between the UW and Oregon fanbases, but it still delivers the same intensity and passion during gameweek. It has been a source for endless jokes and barbs that highlight geographic stereotypes that are deep-rooted and it, easily, accounts for as many broken homes as heroine abuse, domestic finances and extramarital affairs do in the state of Washington. Oh, and it makes for great Mondays after Apple Cup: 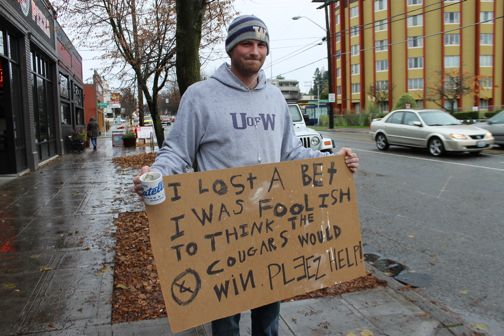 Jack Follman, Pacific Takes: The Apple Cup is always a difficult game for because I am a fan of both teams, growing up as a fanatical Husky fan as a kid and going to every game but then going to Washington State for school which always shocks everyone. I know it seems impossible, but I really like both teams so I definitely like the Cougars. I think the rivalry is fun though as it is a cultural rivalry as opposed to just a football rivalry and I think it has gotten a lot less hateful in recent years with how both programs have struggled.

4. What are the matchups you consider the keys to victory against WSU? Who has to step up and what does the coaching staff have to do?

Gekko Mojo, UW Dawg Pound: UW's pass defense is currently rated #9 in the nation which, despite having a pretty weak rush defense, is still pretty impressive in the P12. The Cougars are top 10 in the nation in passing yards (despite a relatively weak yards per pass play). This will be a strength vs scheme situation. The Huskies kept Desmond Trufant out of the Colorado game to nurse some minor injuries to ensure that he'd be a full strength in this game. Combined with the emerging Marcus Peters, the reliable Greg Ducre and the playmaking safeties Justin Glenn and Sean Parker, the Huskies Secondary versus the Cougars Pass Offense will be the matchup in determining the outcome of the game. I expect that Shaq Thompson and Josh Shirley (who had a huge Apple Cup a year ago) will both play key roles in generating plays in pass rushing to drive to a Washington victory.

Jack Follman, Pacific Takes: The Husky secondary against the Cougars receivers. I think Sarkisian sat Desmond Trufant in the Colorado game to make sure that he is healthy for the Cougars and can either negate Gabe Marks or Isiah Myers. If the Husky secondary can cover the Cougar receivers, I think the Husky offense just needs to score a few times to win comfortably. The defensive line will also have to be able to get pressure on Tuel and/or Halliday or it could be a very close game.

What's your score prediction for the Apple Cup and why?

Gekko Mojo, UW Dawg Pound: Ughh. I hate predicting Apple Cups as they are notorious for getting crazy. Still, I'll oblige. I'll go with UW 38 - WSU 27. I expect that UW will control the ball enough with their rushing attack, commit fewer turnovers and convert a majority of their scoring opportunities on the road in Pullman. On the flip side, I expect a spirited effort from the Cougs and definitely a few big plays on offense, but not enough horses on the defensive side to turn the game in their favor.

Jack Follman, Pacific Takes: Washington 28 Washington State 20. I think the Cougars will be able to pass the ball with how much time the Huskies lack of pass rush will give them, but I don't think the Cougar offense will be able to stop the Huskies Big 3 in Bishop Sankey, Kasen Williams and Austin Seferian-Jenkins. The game will never be too close, but I feel the Cougars will be able to make enough plays to keep it within striking distance, but the Husky defense will keep closing the door on them with interceptions and pressure late in the game.