We've covered the zone read in our first look at the Oregon offense. Today, we start our look at zone read variants that have popped up as counters to the staple Ducks run play.

Perhaps the most commonly used variant of the zone read is the midline read. Again, the Ducks are leaving a defender unblocked on the play. The big difference is that instead of letting a defender loose on the edge, they leave an interior man unblocked (either a defensive tackle/nose guard or an inside linebacker). Chris Brown of Smart Football wrote a post identifying Oregon reading the three technique defensive tackle in a previous Ducks game versus the Trojans.

Generally, defensive tackles are the most imposing players on a college defense, so it makes sense for smaller offensive lines to release and force them to make decisions. However, you also run the risk of the defensive tackle completely blowing things up.

Here's another example from this past season against Cal.

Midline read of the defensive tackle 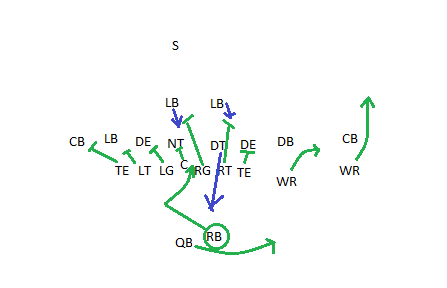 With Cal putting four defensive linemen up front, the Ducks will try and move away from the strength of the interior and attack the outside running lanes against the linebackers. In this case, Trevor Guyton (lined up as a defensive tackle, likely in the three technique) is left unblocked. The right guard and right tackle in front of him engage the linebackers to try and give LaMichael James space on the inside.

This would open up a cutback lane in case the plan goes awry toward the playside, where four Oregon linemen will take on four Cal linemen in man-to-man assignments.

With Guyton playing the mesh, Darron Thomas hands the ball off to James, who then moves playside to the left to try and find a hole to exploit. Good Cal defensive pressure nearly stops this play in its tracks. Ernest Owusu gets past the LG #77 Carson York. Mychal Kendricks can’t be held back by #69 Bo Thran for too long, forcing him back and behind on the play.

But LaMichael recognizes that there’s nothing in front of him, and tries to find something happening from the back, stopping his leftward trek and cutting back toward the interior. Thankfully, many of the Cal defenders have been flowing toward the playside and Mike Mohamed is a little too far from the play to have an impact. Additionally, the C #54 Jordan Holmes manages to push NT Derrick Hill just enough that he falls to his knees.  James now has just enough of a crease between the pursuing Guyton and the blockers sealing toward the sideline to try and move forward. With Guyton wrapping him up as he moves forward, great explosive leg movement by James allows him to pick up the crucial first down yards after contact, kicking forward to keep the drive alive.

Plays like these are where having a small but explosive player like James makes all the difference. Someone that size who can play inside of the tackle box and still pick up yards after contact is a crucial element of any super successful run attack like Oregon’s.

Here's video of the play.

It's not always the defensive tackle that gets read though. Against 3-4 alignments, the offense will sometimes let other defenders loose to focus on the defensive line, like the inside linebackers and the safeties.

Midline read of the inside linebacker/safety 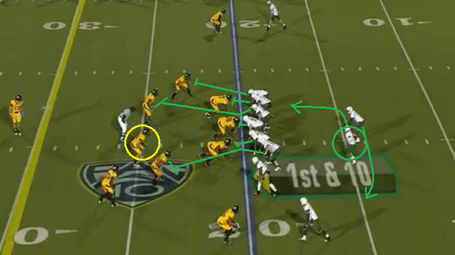 Things are a little bit different with a 3-4 alignment, when there is one less interior linemen to read. Usually it goes to the second level of defense with one of the inside linebackers. In this case, Mike Mohamed gets read while the rest of the linemen swallow up blocks.

Since Mohamed stays back to watch Thomas veering to the outside, Thomas hands it off to James to pick up decent yardage. Since the Oregon linemen don't have to worry about Mohamed, that leaves the six interior blockers to only worry about six of the seven defenders, and thus they're able to sport man assignments.

Video of the play.

Sometimes it goes even further than that. If the linebacker isn't making any sudden motions on the play and holding his position, then it can be the backline that gets read. 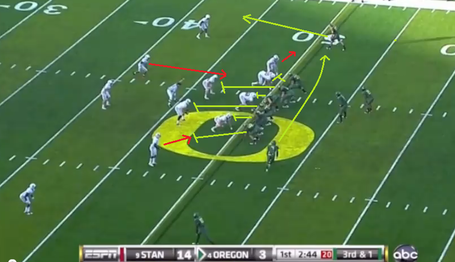 Here, Oregon reads the 3-4 safety (giant red arrow) blitzing through the B gap while the rest of the blockers take out defenders. The principles don't differ much from the zone read: If the defender overruns the play and takes steps toward the quarterback, the QB hands off the ball to the RB and he takes off. If the defender crashes toward the running back or retreats on the play, the quarterback will keep the ball and curve away from his man.

Video of the play in real-time.

This isn't the most interesting of the Oregon plays, but it's something you'll see occasionally by the Ducks if they feel defenders are overcommitting to the edge. It is a favorite play of Oregon in short-yardage situations, since defensive tackles generally must be very disciplined when facing this type of pressure inside, and a proper read by the Oregon quarterback with good blocking almost always guarantees a first down.

Oregon generally does not expect to pick up huge yards on the midline read, but it's a good change of pace to keep the defense honest when they're primed to guard the outside, providing a counterbalance to their staple running play.

However, Oregon has to be weary of using this ploy when facing a defender who eats up space in the middle. Otherwise, Nick Fairley will end up doing something like this in the BCS title game.