While the rest of the country is turning toward their attention to Wisconsin cheese-grating UNLV, it's time for us to turn attention to the West!

We covered Montana State-Utah yesterday. Today, Arizona State-UC Davis, and we take our look at the fighting Aggies.

This is Davis, California, aka my hometown. 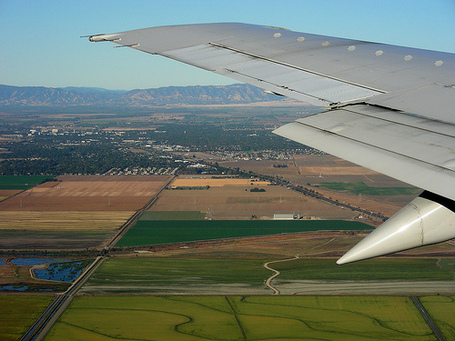 (via So Cal Metro)

I know everything about this school. Very spacious. So many tall people. Lots of smart and functional individuals. And drinking. So, so much drinking. Because it's Davis, the closest form of entertainment is Sacramento, which means alcohol becomes your very best friend.

In many ways, it's the equal of a UCLA in terms of academics, particularly in engneering. One way it isn't the equal of UCLA is that they aren't so good at the athletics thing. One way they're superior is all the drinking. Definitely potential there for Davis to be a big-time college football school one day.

This video pretty much explains what everyone thinks about UC Davis.

Bikes, cows, Cal rejects (why do you think they drink so much?). Sounds about right. UC Davis does have an In-N-Out, so SUCK ON THAT CAL!

What is Davis famous for?  Ever seen our toad tunnel?

Football history: UC Davis has produced 30 conference championships, and were part of Division II up until 2006 before being promoted up to Division I FCS. UC Davis has produced Ken O'Brien, who may have been the best quarterback the New York Jets have ever had (think long and hard about the list of great New York Jets quarterbacks, and remember that Joe Namath is overrated at everything but boozing, schmoozing and floozing).

Previous encounters: Division II UC Davis beat a crappy Stanford team once upon a time, which prompts almost every TV announcer to mention that UC Davis beat Stanford, and therefore they can beat anyone, particularly from the Pac-12. This was talked about a lot en route to their matchup with the Bears last season, and then it was 35-0 at halftime, and then no one was thinking about it.

Oh yeah, that Arizona State team: The Sun Devils defense has lost a lot of players this offseason. A shutout tonight could help rectify any worries ASU fans have about this team D and get people thinking again about Pac-12 South title (they'll need, what, seven wins?).

Football is back. Start tipping some cows over Davis fans! Even though it's been often refuted, just try your hardest and maybe you can get that cow on its side/beat ASU!