The Stanford Cardinal have had a kickass run attack the past few seasons, and David DeCastro has been the most critical cog in its flawless humming. DeCastro's strength, power, speed, and all-around nastiness give offensive line coaches wet dreams, and someone will be very pleased to grab him at the next level.

Perhaps the best such example of DeCastro's all-around badassness is his ability to execute the "power O" run play. Here's a brief primer (a much more thorough explanation can be found here).

The critical part will come from the offensive guard. The guard will kick out from his stance going backwards, then take a few lateral steps behind the center and attack the open gap and take out the final blocker. The running back will follow.

DeCastro was a master of being the pulling guard in this scheme, and unleashed a host of Stanford running backs for 20+ yard runs. Here's a sample from last year. 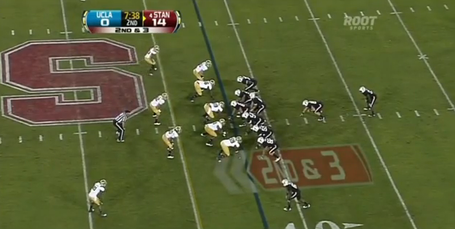 Stanford is in standard I-formation with the tight end on the left. UCLA is in a 4-3 formation with an extra defensive back in the box. The Bruins seem very intent on stopping the run, but the Stanford run blocking (particularly from DeCastro) will negate any of that. 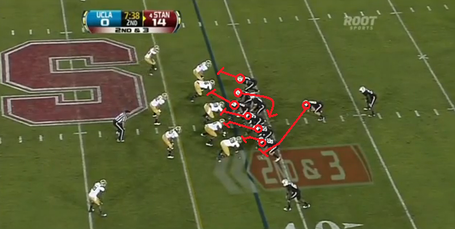 As you'll see here, the right tackle, center, and left guard will engage the Bruins defenders to their right, while the left tackle and tight end will hit the inside shoulderpad of their defenders to drive them out of the play.

This opens up a gaping hole inside, which the pulling guard (DeCastro) will happily attack.

The fullback engages the play by taking out the defensive end/outside linebacker on the playside who's about to slip the blocks of the Stanford O-linemen. That frees up the left tackle to engage one of the UCLA unoccupied linebackers, giving DeCastro a clear lane to take out his man. 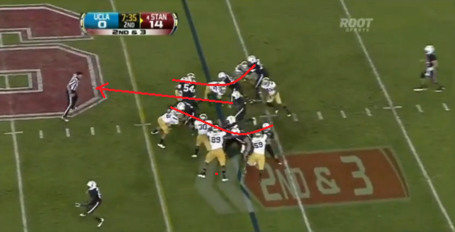 DeCastro engages and takes his defender out of the play, and the Stanford running back's got open spaces.

Here's an end zone view of the play.

See how DeCastro knows exactly which lane he has to attack to try and keep the Bruin linebacker to stay out of the play. 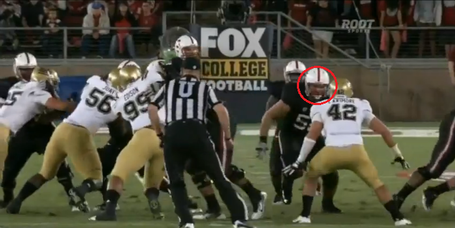 If you're able to watch the video of the play, you'll see DeCastro do his best to shift while pulling to make sure he gets the proper angle to engage the UCLA linebacker.

DeCastro then gets low while keeping his base forward, readying to engage his defender while bracing for impact, but also to keep flexible and turn his defender away from the play.

DeCastro drives Larimore away from his original base and pushes him to the side by getting his right hand underneath Larimore's left shoulder. 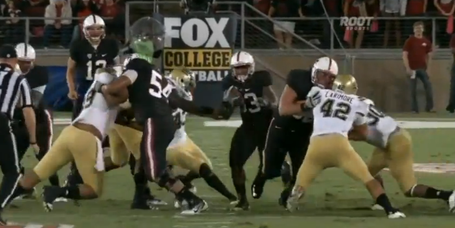 As you can see, Larimore loses his original footing trying to disengage and gets pushed to the side while DeCastro continues to open up the hole, giving Taylor plenty of room to move past the first line of defense. 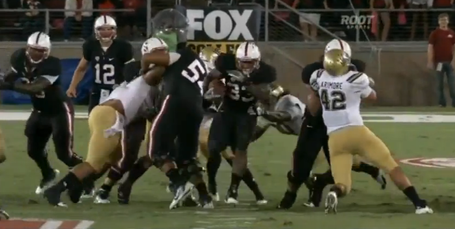 You can see Larimore try to push back and make one last grab for the Stanford runner by sticking his feet in the ground. 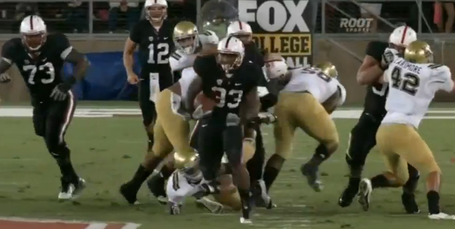 Not happening though. DeCastro pulls up Larimore's shoulder pad and pushes him away from the runner. DeCastro then gets Larimore's body turned away from the play, pretty much neutralizing him from having any effect. There goes the Stanford running back.

The power run play has been Stanford's bread-and-butter the past few seasons, and DeCastro has been the one serving up the pain.

David Decastro vs UCLA 2011 (via JMPasq)