Andrew Luck and Robert Griffin III are the two top picks in the NFL Draft unless shenanigans occur, but third place is probably going to get the greatest consolation prize of them all: One of the best offensive tackle prospects out there in Matt Kalil in the USC Trojans.

Kalil was quite good at protecting Matt Barkley last year. USC gave up eight sacks last season, first in the nation. Last year against the Pac-12 champion Oregon Ducks (a team that sacked the quarterback 45 times, tied for third in the nation), USC gave up only one sack. That's about what you want from your left tackle in the biggest game of the regular season.

USC runs a traditional pro-style offense (which they've done since the days of the wars with the Greeks), and thus their pass protection schemes have evolved to reflect many of the current modern day professional looks most teams see. One of the most familiar looks is the slide pass protection scheme, where pass blockers "slide" into a gap defenders will try to shoot in a passing situation and block out whoever is in their area rather than going through straight man assignments.

This is especially critical against a team like Oregon that loves to bring multiple pressure looks to attack the quarterback and overwhelm man blocking schemes. All areas must be covered diligently to avoid breakdowns, particularly on the blind side.

Here are two examples of Kalil providing excellent slide protection in the crucial matchup in Autzen.

Kalil is the left tackle #75 in these cut-ups.

Here you'll see the offensive line slide to its right to engage the Oregon defenders trying to hit their gaps. That puts the USC tight end on the defensive end and Kalil will take on the inside defensive tackle. The USC running back will come out and take on the roving defensive back.

Some USC linemen won't engage anyone, but that's ok--their job is to block the area, not the man. Kalil will not only engage his man, but thoroughly dominate him and render his defense entirely useless.

You'll see that the pass play is originally intended for the left side; Matt Barkley taking a look toward his left gives us that cue, but the slide protection also gives it away. Generally slide is used to open a passing lane for the quarterback.

You can see USC's tight end is having trouble blocking out his man, but because of the slide protection Barkley has plenty of space to step up to his left and avoid the inside pressure.

Kalil isn't conceding all that much. His man cannot disengage.

Barkley can't find his original man, and the running back has just been blown off his block. However, the slide protection allows him ample space to look back the other way, and Kalil not allowing his man not to get more than a yard or two beyond the line of scrimmage gives him plenty of space to try and move up and deliver his throw. 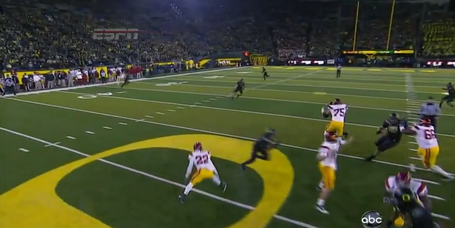 Look at the pocket Barkley has to step up into to deliver his throw! While the rest of the Trojan offensive line has had to give up ground (probably by design), Kalil hasn't conceded an inch...

...and manages to actually pancake his defender.

Kalil's footwork and ability to move laterally give him an ability to combat athletic Oregon defensive ends and negate their pass rush, and his agility is part ofpart of the puzzle that makes him one of the best offensive line prospects of the last few years.