The Cal defense will have a tough time trying to stop Braxton Miller this weekend when the California Golden Bears take on the Ohio State Buckeyes.

There's some good news and some bad news for the Cal defense this week. The good news is that Ohio State's offense isn't quite Urban Meyer form, as the personel type that Meyer had in Gainesville hasn't totally crossed over to Columbus. The bad news is Braxton Miller is making a case against the Tebow-Harvin-Hernandez power spread option model, and that's pretty impressive considering Miller would have to usurp a Heisman Trophy winner and two pro-bowlers.

The aforementioned power spread option model that Meyer used at Florida involved a deadly combination of traditional concepts, including power, trap, counter, zone, veer, and triple option, with the new age concept of spreading teams out from the shotgun. Tim Tebow was the perfect quarterback for Meyer; spectacular between the tackles, deceivingly good open-field speed, and enough skill with his arm to force defenses to play two-high safeties. Add in Percy Harvin, who had remarkably good ball-carrying skills for a receiver, and Aaron Hernandez for the shovel option, and you have a pretty deadly offense.

Braxton Miller hasn't done what Tebow did between the tackles to this point in his career, but has proved to be a pretty deadly perimeter runner, taking a more Percy Harvin-esque role in the Buckeye running game as opposed to the interior one. Meyer has used a combination of option looks, and designed QB running plays to put his best player into advantageous spots on the field. We'll take a look at those concepts, and see why Miller is so successful with them after the jump.

It's one of the oldest plays in the book with a little twist. Instead of the running back getting the ball, it's the quarterback. The blocking up front doesn't change, even from an empty set, show below. The rule for power plays is "three down, two around," or three down blockers (on this play the center, right guard, and right tackle), and two pulling blockers (the H-back, and left guard) 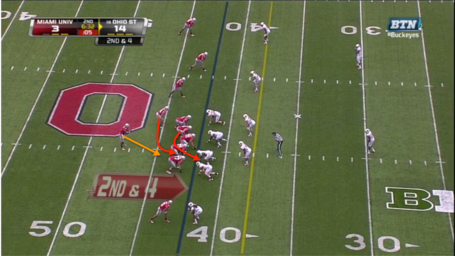 When the ball is snapped, Miller does a quick ball fake, then heads upfield. The right side of the offensive line does its job nicely, as the pulling blockers turn upfield. The guard already his block lined up, which will spring Miller into the secondary. 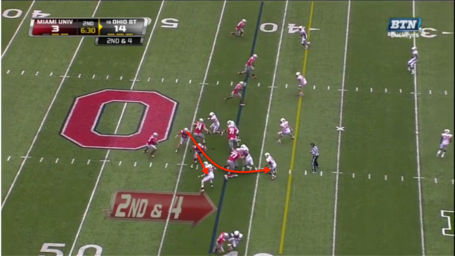 You can see the hole made by the red-jerseys below. Miller exploded through the hole, going about seven yards in about one second. 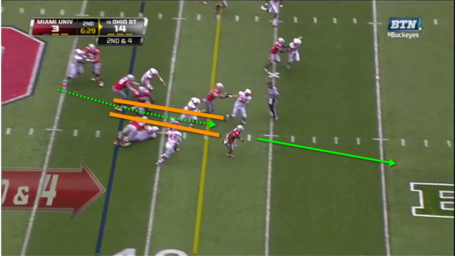 Taking Braxton Miller's speed off tackle into account, rushing him off the edge would be near impossible to stop. Urban Meyer takes that into account and runs this triple option play set up by the motioning slot receiver. Miller is reading the farside defensive end (the three defender for any Chip Kelly enthusiasts), while his tight end sets up the second half of the play downfield. The first option is the running back on the inside zone concept. If the defensive end sits on the read, the ball goes to the running back. If the defensive end crashes on the run, Miller pulls the ball and starts the second phase of the triple option with the pitch-man. 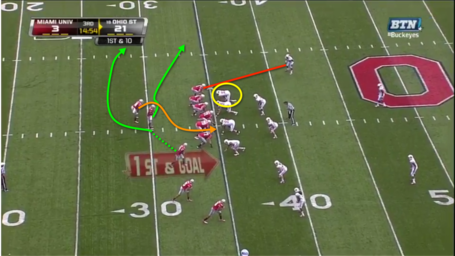 The defensive end crashes downfield to stop the inside zone play to the running back, and Miller pulls the ball as the tight end continues to set up what will prove to be the spring block. 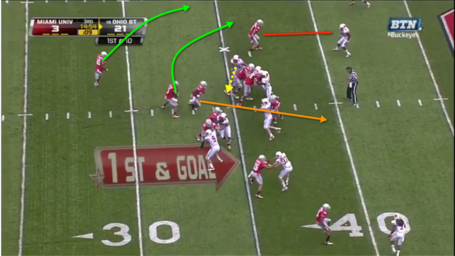 As Miller and his pitch-man start the second phase of the play, it becomes obvious that the defense is at quite the disadvantage. To this point, the play has been ran perfectly, as the defense is forced to pick who is going to score the touchdown. 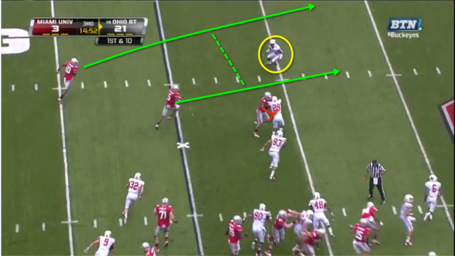 When the "pitch point" occurs, Braxton Miller decides to show off his ball-carrying skills, and delivers a deadly fake pitch to force the defender to bite on the pitch-man. Notice how Miller's shoulders are completely square to the sideline as fakes the pitch. 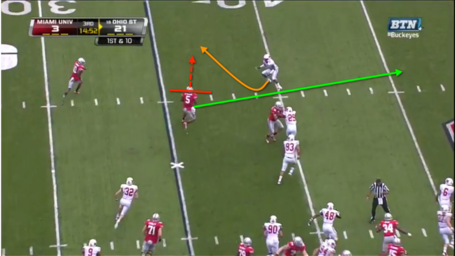 After Miller discards another defender, it's off to the races. A collective, "good luck catching him" to defenses squared against one of the fastest players in the Big 10 (as ironic as that sounds). 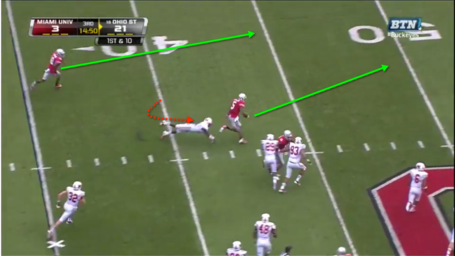 The good news for Cal fans is that Miller and his receiving corps haven't quite gelled yet, and the drop back passing game has been less than phenomenal for the Ohio State offense. Meyer likes to roll the pocket for his speedy quarterback, who will essentially make defenses defend both the run and pass on each play he leaves the pocket.

Cal defenses have a knack for confusing spread oriented quarterbacks (i.e. Oregon 2010), and I wouldn't be too surprised to see some rendition of the Cover 0 defense used against Miller and his "not-fully-commissioned" passing game to try to take Miller's running ability out of the equation early. If Miller can turn the corner, though, it will be a long day for the Cal defense.