Well, the "Mad Scientist" of College Football might not have had a great "2.0 reveal" in his 30-6 shellacking at the hands of the BYU Cougars, but the Washington State Cougars and Leach's offense are still a work in progress. So how did BYU stop Leach's the high powered air attack, simple, drop eight into coverage, and hope that Jeff Tuel wouldn't beat them on tough throws?

You'd think that the airraid has a built in outlet for the super-conservative defense, but frankly, the airraid's purpose was to get defenses to go INTO zone, not out of it. With more time to make reads, the airraid QB could be a surgeon all game throwing the ball into windows, for big yards. Every airraid QB before Tuel was carefully trained specifically for analyzing and destroying zone coverages, especially with time to throw against three-man rushes.

Unfortunately, Tuel and the WSU offensive line weren't up to the challenge against a really solid BYU team that dared Leach's offense to succeed, but they couldn't respond with anything. Underneath passes were gobbled up by a swarming defense, run plays ruled virtually useless, and any of the pre-organized concept that Leach likes to use were thwarted by the excessively crowded secondary. So yes, this problem starts at the root of the on-field performance (i.e. pass blocking and throw accuracy), as opposed to the game plan, and is a problem that will weigh down the Cougars for perhaps an extended period of time.

After the jump, we'll take a look at one of the most important plays in the WSU playbook, and analyze how and why BYU defended it so conservatively.

Here is the mesh play, used to beat both man, and soft zone coverage. The interior receivers will cross, almost trying to "mesh" by one another, but when the receivers identify zone coverage, they are instructed to sit in between the zones. BYU will be dropping eight, while rushing two defensive ends, and a nose guard. 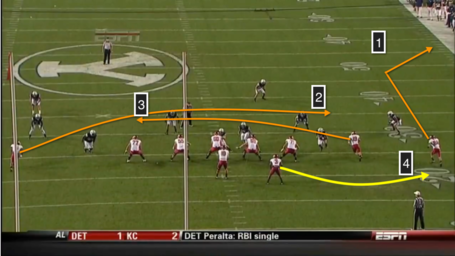 The quarterback should read the corner route first, then come back to his playside mesh, followed by his backside mesh, and lastly go to his running back. 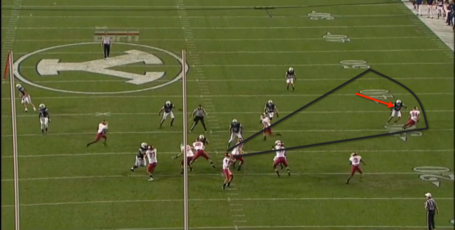 Tuel reads the corner route correctly. The BYU defensive back reads the route, and cuts underneath it to prevent the easy completion. 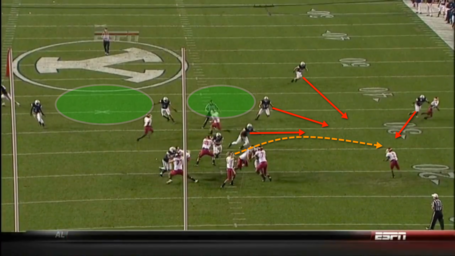 But instead of going through his progression, and attacking the center of the field where his two receivers were about to curl into, Tuel goes straight to his safety valve, which was gobbled up easily for short yardage, and promotes an even more conservative defense. It's even better when BYU can rush only three, and force Tuel to leave the pocket and shorten the play. 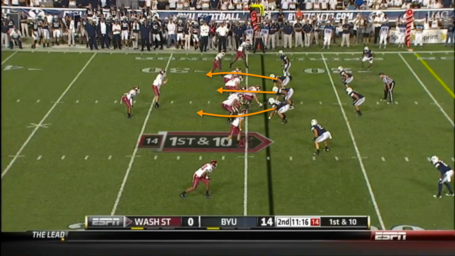 On this play, Tuel was facing a first down, with plenty of time remaining, and an apparent three man rush. As the play developed, the right tackle was forced to retreat and seal off Tuel's frontside rush. 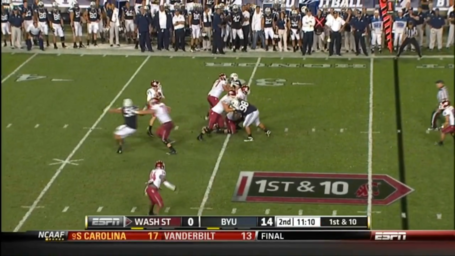 Instead of stepping up into the pocket, Tuel runs out, and then keeps on running, shortening the field against eight man coverage. BYU successfully pressured Tuel in essentially a two-on-five pass rush. 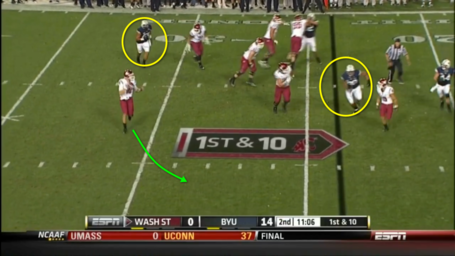 Things won't be any different against the rest of the PAC 12 now that defenses have recognized an uncomfortable Tuel and incomplete WSU offense. They'll need to gain confidence quickly if Leach wants any shot at a bowl game this season, but perhaps the expectations are still a bit lofty for this young WSU team. Then again, the BYU defense is pretty solid all around, and maybe WSU was just too overmatched on the road. Only time will tell for Leach's new machine.