Trojans Horsed: How Boston College Ran All Over USC

In probably the biggest upset of the weekend, Boston College outgained USC 452-20 on the ground. A look at the film shows what mistakes were made.

Share All sharing options for: Trojans Horsed: How Boston College Ran All Over USC

I don't think anyone really expected this result from yesterday's game. After the victory over Stanford, USC seemed poised to keep momentum going. Instead, Tyler Murphy and the Boston College Eagles ran read options to the tune of 452 yards and 8.4 yards per carry.

Stopping the option game is something that takes a disciplined defense that knows their assignments. Boston College seems to run from a pistol-like system, like Nevada under Chris Ault. Cal fans who watched the 2010 Nevada game should've been having Vietnam flashbacks during this game. I was, due to the running ability of Murphy and USC being unable to contain him, a la Colin Kaepernick. Let's take a look at a few plays to see the mistakes.

Let's start with a play early in the second quarter with BC down 17-6 with 2nd and 5 coming  up on the USC 26. The offense lines up tight, with eight men on the line in three point stances. USC puts eight men in the box, though they use their base personnel. This formation is below. 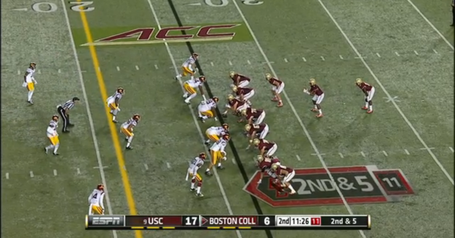 The play is essentially the same as Oregon's inside zone read covered here, as Murphy reads the defensive lineman on the weak side to decide who to give it to. Unlike the Oregon  zone read, this is a run all the way unless you're on the goal line. This formation doesn't lend itself to passing. Anyway, the defensive end circled below crashes in on the running back and Murphy takes it. He has two lead blockers with his tight end kicking out the outside linebacker and his right tackle blocking an inside linebacker circled in blue below. 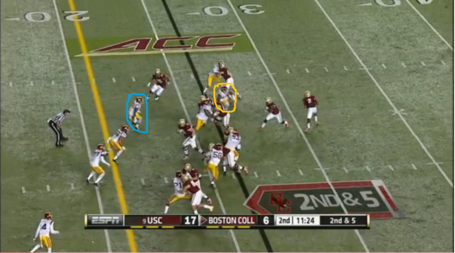 This creates a hole for Murphy to easily get through. When defending the option, there's usually a set of assignments for each player to follow. The USC outside linebacker is doing his job to keep the quarterback from getting outside, playing "contain." The defensive tackle and one of the middle linebackers are playing the dive back and should go after him every time.

Two players make mistakes in their assignments on this play. The first one is the aforementioned defensive end, who chases the the dive back here. He should be taking the quarterback on this play and running him into the outside linebacker. The second mistake is made by the safety, out of frame in the above shot but circled in the play below. He gets drawn in to going after the running back, instead of filling the alley that Murphy runs through.

Both players made the cardinal mistake in misplaying the option, looking in the backfield instead of sticking to their assignments. This turns into a 23 yard gain, setting up a Jon Hillman touchdown run. This play can be seen here. 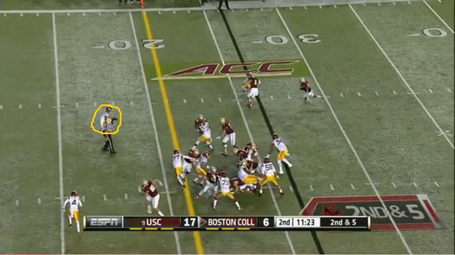 Now we move to later in the quarter, to a touchdown on an end around play borne out of a speed option fake. This starts in a normal three wide receiver formation, with another receiver motioning into the backfield here. This motion brings linebacker #47 Scott Felix up from his pass rushing stance. His mistake combined with good downfield blocking turns this into a touchdown. The initial formation is below. 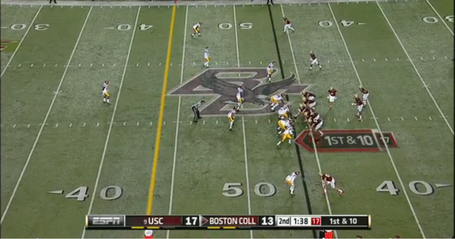 Feliz, circled below, is playing the weakside linebacker during this play. The responsibility of the weakside linebacker is usually to "stay at home" or be prepared in case a reverse or fake occurs. He does the exact opposite and goes with the flow of the offensive line. A couple of players I'd like to point out for Boston College on this play are their left tackle and the receiver on the offense's left side. The tackle gets downfield in order to try to block the safety. He succeeds in delaying the safety from getting to Sherman Alston, the receiver running the ball. The wide receiver manages too hold his block for quite a while, which opens up the possibility for a touchdown on this play. 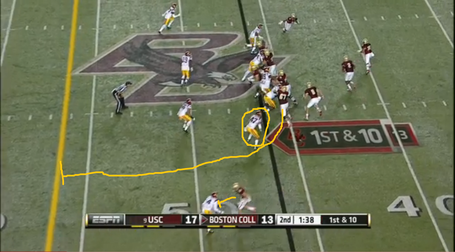 By the time Alston gets the pitch, Felix has over-pursued and there are downfield blockers in place. The full play can be seen here. 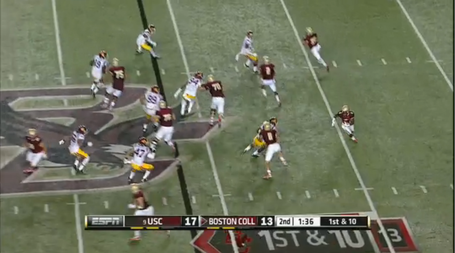 The last Boston College touchdown was essentially the same play as the first play I went through. Here is the link to it. The same things happen during, where blitzers go after the dive back instead of the quarterback, defenders trying to contain the quarterback leave an alley that you could drive a truck through, and no one comes up to fill the alley. The Trojan defense didn't appear to learn from their mistakes from the first half. Credit does have to go to the Boston College offense, as they blocked well for Murphy and his cohorts all game.

Playing against any kind of option team like this requires discipline to assignments. That's what makes playing a team like this or like Oregon, a user of many zone reads, so difficult. They have the speed to make you forget about your assignments. This could be a bigger problem if the Trojans face Oregon in the Pac-12 title game, which may not be too far-fetched at this point.

Justin Wilcox is going to have a field day on yelling at his guys about the film, but there is always hope. I personally think that a lot of these guys have relied on athleticism to get them to this point in their sporting careers, while using this athleticism to cover for any mental errors. This unearthing of their mental errors should be enough to get them to keep learning about their assignments, giving them more fuel to correct their mistakes, and hopefully to make them more complete players.