The clash of the green-clad titans occurs at Autzen Stadium this Saturday, and Oregon will attempt to overcome Michigan State's vaunted defense. Here's how they might do it.

Share All sharing options for: Oregon vs. Michigan State: These Ducks Don't Waddle

(One gif didn't size properly, so a link is provided.)

In a rivalry of green teams that goes back about a week and a half, Oregon faces a big test in last year's Rose Bowl champion Michigan State. The last time I talked about Michigan State's defense, I said that their scheme against Stanford could be tweaked to stand up to Oregon's offense. First, we have to talk about the basic run concept that makes up the Oregon offense, the zone read. 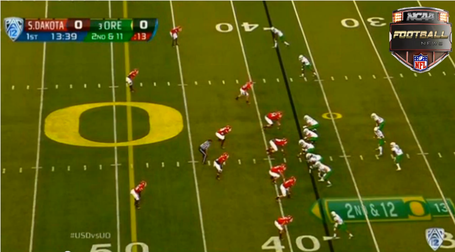 Handoff to running back

The outside zone reads the interior of the defense instead. It appears that usually this play is meant to go to the running back, the quarterback only keeping the ball if a hole opens up on the interior. The playside tackle's job is to seal off the defensive end inside to create that outside gap for the running back, but the running back can go between the tackle and the guard. Blocking of this play is essentially the same, except the backside end is blocked. The read is on the backside defensive tackle or linebacker and whether the flow with the play or fill the gap that the quarterback would run through. Examples of the outside zone are below:

With these two plays, Oregon has a base for the majority of their offense. Now they can run any sort of misdirection that the want out of these two base packages. With Marcus Mariota being perhaps the most talented quarterback to run this offense, the Ducks can open up the passing playbook, and run any number of fakes to take advantage of any defense peeking into the backfield instead of reading the offensive line. One play shown below has an inside zone fake, and the middle linebacker initially moves forward to meet the run, letting the running back run right by him for a long completion up the middle.

This past weekend, out of the initial screenshotted formation, the Ducks motioned out one running back and faked the outside zone to the other back. This set can lead to a quick screen to the motioning back, or the less frequent deep ball. Mariota takes advantage of the defensive backs creeping up to stop the screen and fires it deep to Dwayne Stanford for six. Like many other systems, Oregon wants to take advantage of over aggressive defenders getting briefly out of position.

Michigan State poses a problem to this scheme. As seen against Stanford in the Rose Bowl, Michigan State's defense is incredibly disciplined and runs defensive coordinator Pat Narduzzi's scheme to near perfection. An article written by Chris B. Brown details how the Spartan defense works. They press the corners on the outsides, run zone blitzes, and take advantage of their stout pass rush to hurry quarterbacks into mistake. A gif from the article shows Michigan State's six man blitz. Usually rushing six will leave five men in coverage playing man. Michigan State uses a zone in this situation to let their safety and linebacker take away the quarterback's hot route options. Without these, it's an easy sack or incompletion.

Oregon has an equalizer that Michigan State hasn't faced in Marcus Mariota. While the Spartans have faced the likes of Braxton Miller, a good comparison in their respective running ability, Mariota is a more dangerous quarterback than any other Big 10 quarterback due to his running ability. It forces the defense to pay a little more attention to that threat. The Spartans didn't have to pay attention to Kevin Hogan like this.

This also ties into the speed of Oregon's team. They recruit speed, forcing opposing players to make their reads quicker than they are capable of. Michigan State's mistakes against Stanford came from receivers getting a step on their defenders, and Kevin Hogan exploiting it. Marcus Mariota is objectively a better quarterback than Kevin Hogan, and  he has more speed in his receiving core than Stanford's does. This could lead to getting big plays on Michigan State early, with receivers getting a step on the corners due to misdirection. The Oregon offense may only get a few chances if Michigan State plays disciplined defense, but they have the ability to make those chances count when they appear.