Four weeks into the college football season, there is little to currently argue. The hierarchy of the Power 5 conferences remains the same, but the separation between them has widened.

Share All sharing options for: Pac-12 vs. SEC: Separation widening after Week 4

The smoke has cleared and the Pac-12 has done little to challenge the SEC as the best conference in the nation.

When the conference comparisons were first analyzed two weeks ago, the sample size was small and mainly comprised of FCS massacres. A few weeks later, key out of conference match-ups and inter-conference play have started to fill in some detail on the broad strokes painted in the original post-Week 2 analysis. 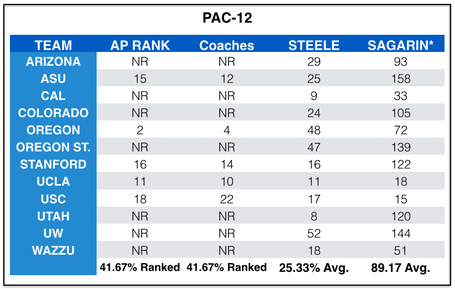 Examining the same categories (plus the addition of the coaches poll), it's evident that each conference has ramped up in competition from just a few weeks ago--some conference play has aided. The Pac-12 average for Sagarin strength of schedule (SOS) rating has dropped from 114.66 to 89.17, while the SEC has dropped from 101.64 to 52.86--a 36.31 difference in favor of the SEC.

The number of out-of-conference, Power 5 opponents each conference has faced is comparable: seven for the Pac-12, six for the SEC. While that number appears to lean in favor of the Pac-12, only one of those out-of-conference foes were ranked at game time (Oregon vs. Michigan St.). Conversely, four of the six out-of-conference games the SEC played were against teams ranked in the AP Top 25 (Clemson, Kansas St., Oklahoma, and Wisconsin), where the conference went 3-1.

The SEC West remains the best division, about 8 points higher than the Pac-12 in both the "central mean" and "simple average." 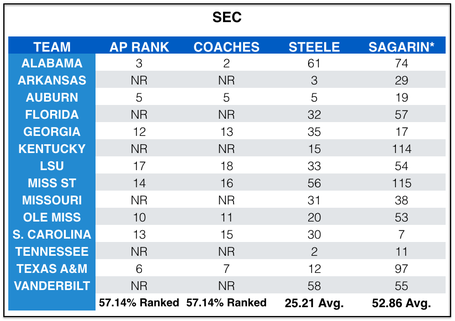 Focusing on the Pac-12 and SEC, here is what's clear: the SEC's top programs took advantage of their opportunities in the national spotlight, while the Pac-12 limped out of them. Style points do count.

That is not to say the SEC hasn't taken its lumps (we're looking at you Missouri) and the Pac-12 has not had victories worth celebrating, but overall, the top tier of the SEC handled their business.

And that has been reflective in the fluctuation of Pac-12 team's placement within the AP Top 25.

Washington started the season ranked, but fell out after week one. USC started at 15, jumped as high as 9, and then a Boston College loss brought them down to 18. At 2-1, Stanford dropped from the edge of the top 10 to 16 after an ugly loss to Southern Cal. The only constants so far are Oregon, UCLA, and Arizona State. Although, UCLA has not looked the part, and ASU has beaten three teams with a combined record of 3-8.

In week two, the Marcus Mariota Heisman campaign was in full-force as the Ducks took down the Michigan St. Spartans in Eugene. The following week, they gave up 400+ yards to the Wyoming Cowboys, and one week later escaped Pullman with a 7-point victory after being twenty-four point favorites (And yes, there was the controversial passing interference no-call).

At 4-0 and #2 in the nation, it's indisputable-the Ducks are THE program in the Pac-12 up to this point, but they have been exposed. Their secondary is susceptible and will struggle to do well against a team that protects the football (117th nationally, allowing 315.3 YPG). And in the Pac-12, they will face some of the top aerial attacks in the nation week in and week out. Currently, Pac-12 passing offenses in the Top 50 nationally include Arizona, California, Oregon St., UCLA, Utah, Stanford (all of which remain  on the Ducks schedule).

Who is there to pick up the slack if Puddles stumbles?

In the course of two weeks, a young surging Southern Cal team lost at Boston College, UCLA barely escaped a depleted Texas, Taylor Kelly was injured for the Sun Devils, and Arizona, Oregon St, and Washington are still TBD.

Utah, yes, Utah, has been a bright spot going into Ann Arbor and defeating the "Buy 2 Cokes and Get Free Tickets" Michigan Wolverines in Week 4. But it is still tough to believe the Utes will be able to translate that into conference success until they prove otherwise.

The argument comes back to this: the Pac-12 does not matchup top to bottom with the SEC.

These comparisons could be argued: Oregon to Alabama. UCLA  to Georgia. Arizona State to South Carolina. Stanford to Mississippi St. Southern Cal to LSU. But who from the Pac-12 will equalize the playing field against Auburn, Ole Miss, or Texas A&M?

The answer: no one. The oddsmakers would be in favor of any of those three SEC teams if they faced Arizona, Cal, Colorado, Oregon St., Utah, Washington, or Washington State.

The conference has some ground to make up on their southern rivals, but will have limited opportunities to do so. With conference play beginning, it will be difficult for middle-of-the-Pac teams to elevate themselves without key wins over already ranked Pac-12 opponents. Essentially, the Pac-12 will be robbing Peter to pay Paul.

But the same goes for the Southern schools. There are currently eight SEC teams ranked in the AP Top 25, but once conference play begins and there are no more games versus Lamar--things could change as well.

The key is this, the Pac-12's top teams need to take care of business, and do so in an impressive fashion. Upset losses to conference bottom dwellers are not going to help anyone's case.

Included below are similar charts for the Big-10, Big-12, and ACC to the one's utilized above for the Pac-12 and the SEC above. The argument has been and continues to be between the Pac-12 and the SEC. Yes, these conferences all boast Top-10 caliber programs, but as a whole-they are not in the conversation. [EDIT: Big-12 has made up ground, may be re-examined versus the Pac in the post-Week 6 analysis.] 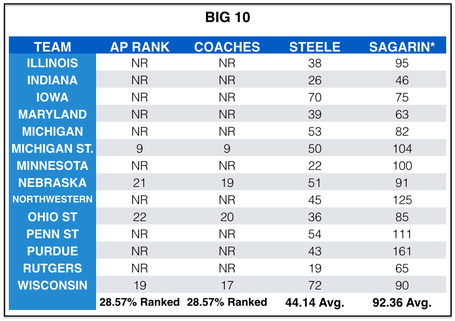 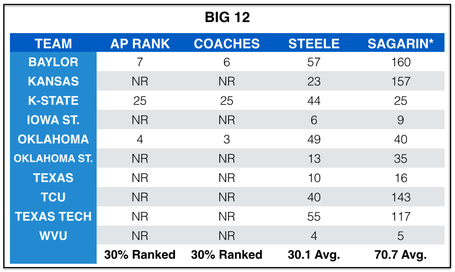 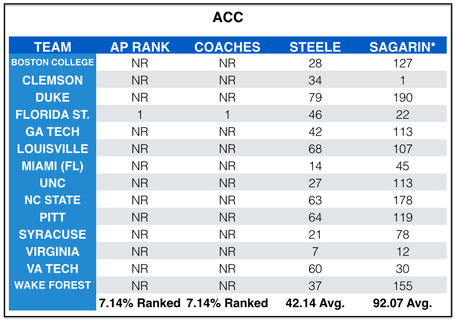