Pac-12 vs. SEC: How the Pac stacks up against the Power 5 after Week 2

Arguments over drinks, back-and-forth rebuttals on Twitter, and panels of college football experts all have one thing in common: they cannot come to a consensus on which college football conference stands above the rest. Is it the almighty SEC, full of tradition? The offense-minded Pac-12? Or how about one of the Big-[insert number here that inaccurately reflects the number of teams in your conference]s?

Share All sharing options for: Pac-12 vs. SEC: How the Pac stacks up against the Power 5 after Week 2

Like the majority of off-season analysis, attempting to rank teams, conferences, players, etc. is pure speculation. Previous seasons' successes and returning players often provide indications of future success on a micro level, but ranking conferences as a whole is another challenge.

Even more so when no one has played a game.

But alas, we are two weeks into the college football season. Although it is a small sample size, it provides the ability to produce some form of fact-based analysis on players, teams, and conferences despite the majority of Power Five conference victories against FCS opponents.

The casual college football audiences may cite the AP Top 25 or mind-numbingly regurgitate quotes from ESPN talking heads as they argue why their team/conference is unrivaled. Others may factor in a team's strength of schedule. None of these arguments are solely right or wrong, especially in the present day college football landscape that features upset possibilities on any given Saturday. Utilizing the combination of these rankings and arguments allows us some ability to begin to paint a picture of where the Power Five conferences stack up against one another--focusing primarily on the Pac-12's place in the Five's hierarchy. 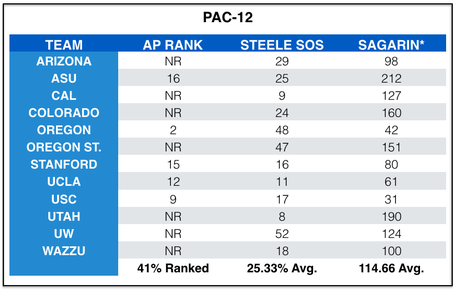 Pre-season commentary was a steady back-and-forth between the Pac-12 and the SEC. Would this be the year that the Pac-12 overthrows the SEC as the best conference in the country? Heading into Week 3, Sagarin Ratings rank the SEC West as the toughest division in college football, followed by the Pac-12 South.

Comparing Phil Steele's strength of schedule (SOS) and Sagarin ratings through week two, there is parity between the Pac-12 and the SEC. On average, the SEC plays a 0.12% more difficult schedule (over the course of the season) according to Steele's analysis. But that's just being picky. Through two weeks, the Sagarin rating average for SOS is a 13.02 difference in favor of the SEC. And although bottom-dweller programs such as Vanderbilt tip the scales towards the southern schools in this regard, marquee programs like Georgia and South Carolina have strength of schedules ranked 23 and 26 after week 2, respectively (both higher than any other Pac-12 program).

That is not to discount the difficult out-of-conference scheduling that Pac-12 fans have grown accustomed to. Arizona, Oregon, Stanford, UCLA, and USC all have Sagarin ratings through Week 2 within the top 100. Unfortunately, Arizona State, although ranked sixteen in the AP Top 25, has yet to play anyone worth mentioning. 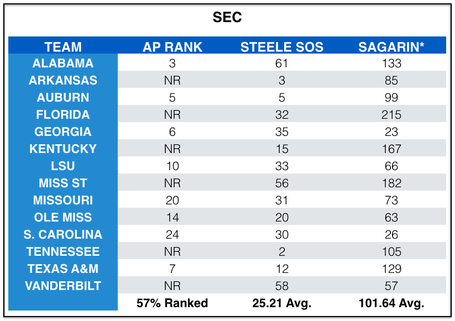 Overall, through week two, the Pac-12 and SEC have played comparable schedules. But the SEC has eight teams ranked in the AP Top 25 compared to the Pac-12's five. Additionally, five of those ranked SEC teams find themselves within the top ten.

This is not surprising. Up to this point, the Pac-12 has already taken a few lumps.

The off-season hire of Chris Petersen to replace the now Southern Cal coach Steve Sarkisian was lauded by analysts and fans. Why wouldn't it be? The guy has done more with less--the oxymoron of Sarkisian's tenure in Seattle. And although the Huskies are 2-0, it has been an ugly 2-0. Barely escaping Hawaii and Eastern Washington University makes it tough for voters to lean your way. After a Top-25 preseason ranking, the Huskies now find themselves on the outside looking in.

Still, there are Pac-12 teams in the Top 25 that have not promoted a dominant image of the conference on the national stage. With Heisman hopeful Brett Hundley behind center, Jim Mora's UCLA was a popular pick for the new College Football Playoff, but after week one they fell out of almost every analysts' predictions. The Bruins are still 2-0 and ranked #12, but it has been an ugly 2-0 (just ask BruinsNation.com). Barely escaping with a win at Virginia, and beating Memphis by seven at home is not the formula to elevate yourself into the upper echelon of collegiate programs.

Although there are some negatives with the Pac-12's opening performances, there have been some positives as well. Defending Big-10 and Rose Bowl champions, Michigan St., marched into Eugene, OR in week two with the Big-10's hopes of a College Football Playoff berth on their back. Those hopes were squandered before the fourth quarter began. And despite Stanford's 1-1 record, they cannot be counted out either. The Cardinal had a dominating performance in week one and lost to a surging USC squad.

Through week two, the SEC has more marquee wins than the Pac-12. LSU toppled Wisconsin, Georgia crushed Clemson, and Texas A&M reemerged as a contender despite the departure of Johnny Football.

At this point, as a Pac-12 fan, it's hard to argue against the SEC.

Through week two, the SEC gets the nod.

Do not be dismayed, Pac-12 fans. There is still plenty of opportunity for the Pac-12 to move past the SEC. Arizona State, Stanford, and Southern Cal all have opportunities later in the season to make a national statement against Notre Dame. And UCLA can repair its tarnished image in Week 3 as they face Charlie Strong's stumbling Texas Longhorns. (Not to mention the Bruins have Oregon, USC, and Stanford all at the Rose Bowl this year.)

Fortunately for college football fans, this is only week two. And that still leaves a lot of arguing, debating, and football to be played. 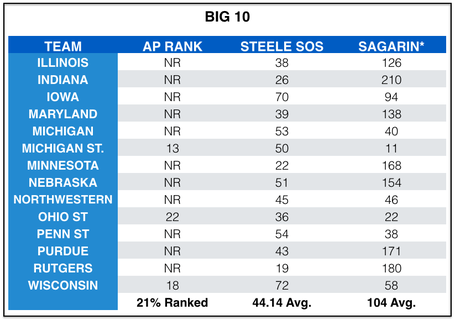 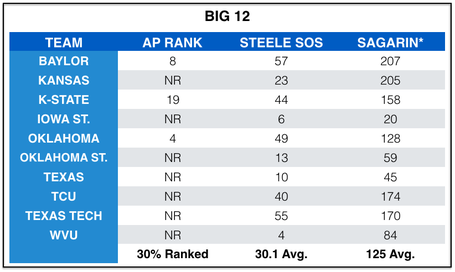 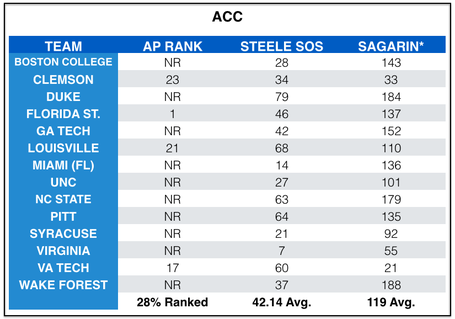