Oregon Ducks Playbook: Return Of The Wishbone Against LSU?

Share All sharing options for: Oregon Ducks Playbook: Return Of The Wishbone Against LSU?

We've talked about the zone-read and the midline read. Time to move onto some of the fancier plays Oregon has thrown out at their opponents as Chip Kelly's offense has evolved.

The Oregon Ducks revealed some new looks in the BCS Championship game against the Auburn Tigers. Given that the LSU Tigers will feature similar talent as their SEC partners, it makes sense that Oregon would try and employ fancy new schemes to try and exploit the LSU defense.

One of my favorite looks Oregon showed Auburn last January was a new twist on an old-school scheme: The Wishbone. 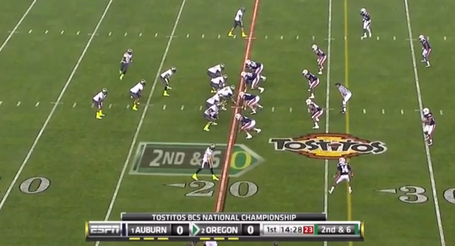 It isn't the conventional wishbone (QB under center, FB positioned behind him, two RBs positioned behind FB diagonally) because the quarterback is in shotgun, but the principles are same; force the defense to cover multiple options in the backfield. The only other change is a WR subbing in as the FB on most of these plays, again providing a modern twist on an ancient football play.

The Oregon wishbone is pretty much an evolved triple option offense (because there are actually FOUR options ont he play). Either the quarterback will handoff to one of his running backs at the snap in a conventional zone read, or he'll keep the ball and try to run with it, or he'll keep the ball and attempt a passing play (likely to the forward back on the field), OR he'll pitch it out to the tailback trailing the play on a traditional option look.

Let's look at a few of the plays Oregon ran out of this formation in last year's BCS title game. 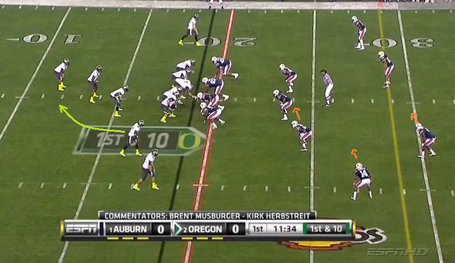 This is the second time Oregon shows this look, this one on the second drive of the game. On most of these plays, one of the two Oregon tailbacks went into motion from the slot receiver spot (in this case, Kenjon Barner) back into a position right behind the quarterback's inside. 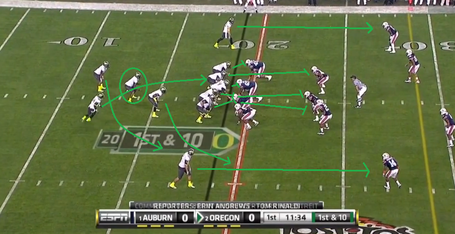 In this case, the Oregon receiver will pull toward the outside as a lead blocker for any outside runs, while the Oregon offensive line will zone block to open up holes on the inside in case Barner gets the direct handoff. However, Darron Thomas won't automatically give him the ball, since the traditional zone-read is still in effect. The right side of the line will double-team Auburn defensive tackle Nick Fairley and leave the Auburn defensive end #94 unblocked on the play. 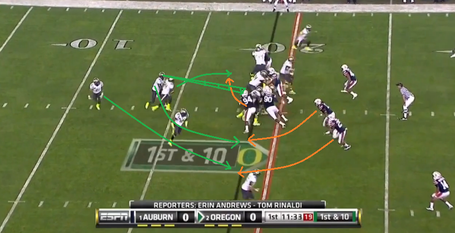 Since #94 is crashing toward the running back, it becomes elementary for Thomas to withdraw the ball and take that ball to the outside. However, Auburn is doing a great job reading and reacting to this new look.

The Tigers are in Cover Zero defense (man-to-man), and each defender on the playside has an Oregon playmaker to take. The defensive end is crashing toward the inside running back. The middle linebacker is responsible for the quarterback. The playside outside linebacker is responsible for the outermost running back LaMichael James in case Thomas decides to pitch. Thomas is confused by the look, and is forced to keep it and scramble for a loss of yardage.

So with Auburn in the seemingly daunting Cover Zero, how will Oregon counteract that defense the next time they show this look?

Keep the formation the same. But change the play just a little. 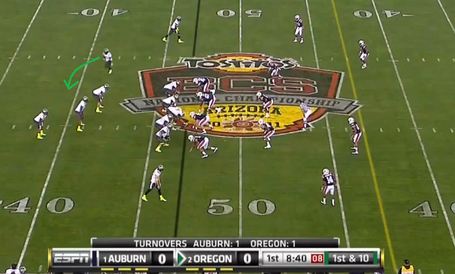 At the surface, this formation looks almost exactly the same as the one that knotted Oregon negative yardage on the last play. The play looks pretty much a mirror image--slot receiver/RB Kenjon Barner now coming out of motion to the left, wide receiver D.J. Davis aligned ahead of Thomas, LaMichael James to the right diagonally of Barner. 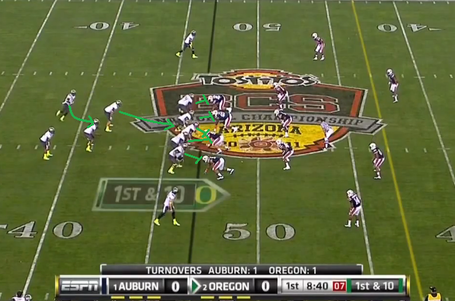 The formation is the same. The blocking schemes are different.

The Oregon offensive line isn't zone blocking here and moving to the second level. This is the classic iso run play, where both sides of the offensive line work to seal off one part of the defense and open up a big hole on the inside. Then a lead blocker helps clear out any linebackers standing in the way of the ball-carrier. Davis goes inside instead of pulling outside to give Barner some cheap easy yards inside. 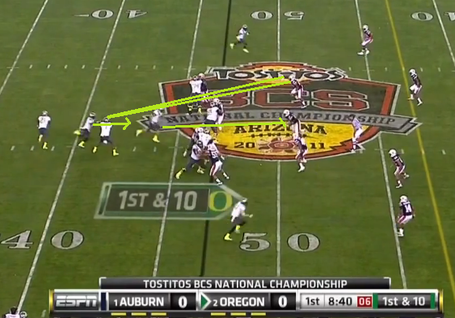 I'm not sure if Thomas is reading anyone, but I do believe he was monitoring pre-snap the outside linebacker shadowing Barner's position. If Thomas saw him making footsteps inside, he could withdraw the ball and commit to the outside. Since the OLB doesn't move much pre-snap, Thomas probably made the decision to hand that ball off to Barner before the play had even set into motion.

Either that, or this was a designed power run to keep Auburn from thinking too much about the outside. This would make sense because the wide receiver would be taking out one of the men--the middle linebacker--responsible for Cover Zero responsibilities, thus disrupting the way Auburn was running their man schemes.

Either way, Barner gets a couple of yards, and the wishbone lives on in this one. 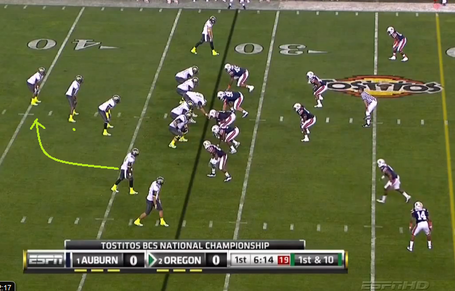 Again, the play looks almost exactly the same to all the others. Three wide receiver shotgun set with a wide receiver in front of the quarterback and a running back behind. Again, Barner comes into motion from behind the play and appears ready to get the handoff from his original side of the field. 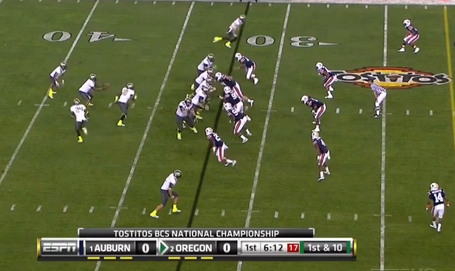 Except whoa whoa whoa! Why is Thomas getting the ball before Barner gets in position behind him? 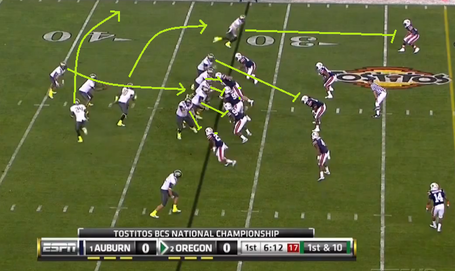 Because instead of simulating the handoff to the running back in motion, Thomas simulates the handoff with the original backfield runner James. Barner wheels to the outside in the option look.

You might wonder what that does? Well, the Auburn defense is anticipating the original play to come to the right side of the field where Barner is coming from. That's the original look Oregon showed, and thus the Auburn defense seems inclined to cover that area of the field. Thus Oregon will try and take advantage of those brief moments of confusion, and exploit the weakside of the defense. 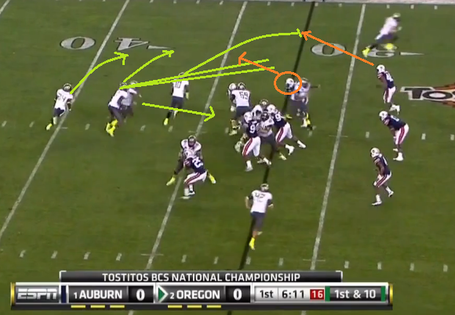 Thomas reads the playside defensive end, who immediately crashes at the snap toward the inside in anticipation of an inside running play (and possibly believing he's on the backside of the play). When that happens, Thomas withdraws the ball from James's grasp and wheels to the outside.

Impressively, the LB #45 manages to recover from his original inside motion and come back outside and try and take out Thomas, but Thomas has the bail out option to Barner on the pitch as #45 prepares to make the hit. With Davis going downfield to block out a cornerback at almost the exact moment of the pitcher, Barner is able to pick up additional yardage on the play.

Here is video of all the different wishbone looks Oregon threw up against the Auburn front in the BCS National Championship game.

Given the personnel that Oregon has in place this season, it would make sense to see more of these three backfield sets. Barner and James would be the feature backs, Paulson would be the versatile tight end who can either come out of the backfield or lead block, and LSU would have to scatter around to figure out how to defend Oregon's various dangerous weapons.

The wishbone is not an explosive play and thus very limited in its scope, but can be an efficient one (a nice little chug of 3-6 yards per play) if employed properly and used in the right spots. And Oregon might need all the efficiency they can get in Arlington.