The Colorado Buffaloes are a flaming wreck that everyone feel sorry for after their annihilation by Fresno State. Well, maybe not Nebraska fans.

Share All sharing options for: Colorado Football Saddens Everyone

The Colorado Buffaloes should be a likeable football team. They're situated in one of the most beautiful college environments in the country, they havee some of the chillest in the nation, they have knowledegable people covering the team (hit up Ralphie Report y'all).

And they are absolutely awful.

To get an idea of how bad last week's loss with Fresno was, read Brian Cook's This Week in Schadenfreude, and keep on scrolling through the Colorado section. And feel the sads.

Colorado is 0-3 and is now looking to try and just win a football game. The Buffaloes have already lost their most winnable games on their schedule to Sacramento State and Colorado State, and could have been lit up for a hundred points if Fresno State's coach was a total bro. After they play Washington State, they face five ranked teams in six weeks (and Arizona State is right on the cusp). No win this week probably means 0-10 is a given.

And nothing is easily fixed. Colorado is so young and inexperienced in so many spots that new players can't be brought in and expected to do any better. And the Pac-12 is so loaded everywhere that it's impossible not to pencil in automatic victory for anyone they face.

Washington State 2008 was an awful football squad, but Colorado 2012 might do their best to replicate that effort this year. It's not something one wishes upon anyone. Makes sense that the Buffs would try and knock off the Cougars to get that lone win.

It's almost like a passing of an unlit torch.

Bill Connelly details the horror in the Numerical.

This is a miserable team. They are bad, they show no heart, they play without passion, and no matter who they put out there (and they tried just about everyone), they stink. It's only going to get worse. The team is going backwards instead of forwards and the schedule only gets tougher. I'd love someone, when they're sober, to look up the most points we've given up in a single season. Because I have a feeling we're going to eclipse that. Does Jon Embree step down after this game? Would that even solve anything? Players aren't improving. Nobody is stepping up. Changes aren't being made. This is awful. Just awful. I already talked about how I'm not for coaching changes midseason, but I also haven't experience a team that was this terrible.

Lugent is a word meaning weeping, and is this week a synonym for Colorado football.

It really is cheating to say this since Colorado football is a synonym for weeping every week, but when the story of this season is written for Colorado, someone should remember the time a linebacker was taken out by a safety tripping over the field umpire. Then that story, and all its unspeakable horrors, should be burned, and buried deep beneath the earth's surface. 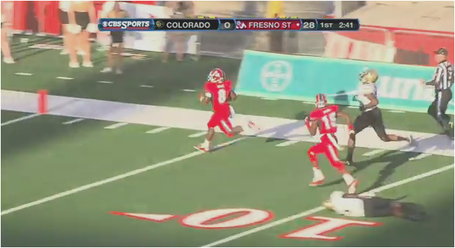 The fetal pose of the safety there is the saddest and most fitting summary of this exact moment in Colorado football.

My god. THE PAIN.