A part of me didn't want to create this post in part because it almost certainly is not what the conference presidents and commisioners will agree to in the end.  I don't make claim to know anything about what the inside dealings of the conference is when it comes to scheduling a 16- team football schedule, but I can imagine, right?

With that said, there's a lot of talk out there about the use of the "pod" system for the conference, beneficial in terms of both travel and maintaining regional rivalries.  As much as some members of the original Pac-8 would love to reconfigure the conference to have all eight of them in the same division, it is technically unfeasible.  CU's president has already raised a fuss about East/West configurations that would keep Colorado from California, the Arizona schools probably wouldn't like being in a division with schools farther away than USC and UCLA are, and despite being in a conference with the California schools, Oklahoma would have its recruiting pipelines to California left untapped.  Plus Larry Scott pretty much said that he would prefer a divisional plan that had schools visit every region of the conference as opposed to only occasionally every few years.

It's one thing to suggest a "pod" schedule in text.  It's a whole other thing to visualize it.  If there's one thing that Notre Dame-Stanford-USC scheduling issue fan post I made earlier in the year taught me, it's that people most realize how scheduling happens when the actually see it.  While I didn't do as comprehensive (i.e. week by week) scheduling this time around, I did set up an Excel table that shows who plays who every year.  Doing so, I think I solved a lot of the confusion that people had, including local and national writers, about how one goes about scheduling around a "pod" system.

When looking at these schedules, one should be cognizant of several things.

First, I created the 2012 schedule (or first year of the conference, whatever is more appropriate). 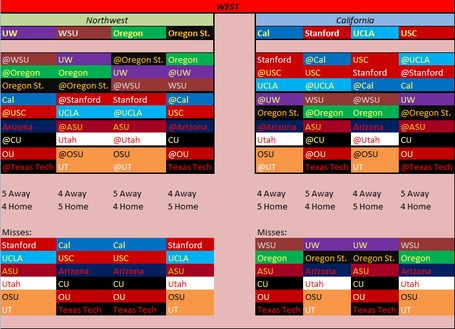 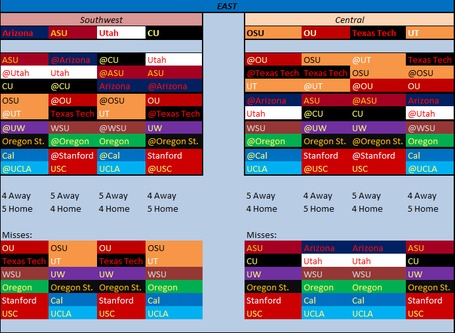 You'll notice that all schools have either four or five league home games.  The exception, of course, is the Red River Rivalry, which takes place in Dallas for the Texas State Fair, so when it says "OU @ UT", it's mostly just a designation as to who's the home team and who's the visiting team at the Cotton Bowl.

For 2013, the schedule changes slightly. 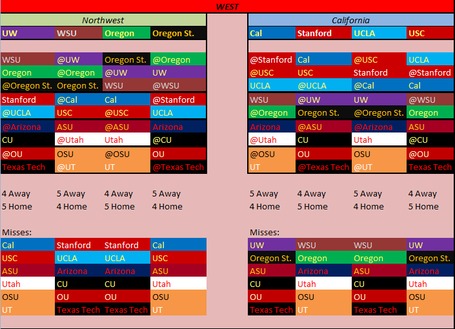 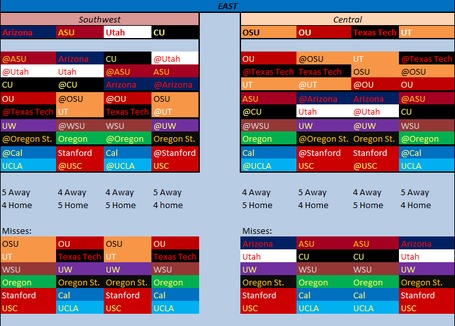 For the season after the first year, the schedules alternate.  If your school had four home league games, you now have five league games.  In addition, the four teams that aren't in your conference but on your schedule are retained for the following year, keeping in line with a home-and-away mentality to the schedule.  For your two in-conference foes, whatever two conference foes you didn't face in the year before you now face.  For instance, Washington didn't face Stanford or UCLA in 2012.  In 2013, it will face both those schools but miss Cal and USC. 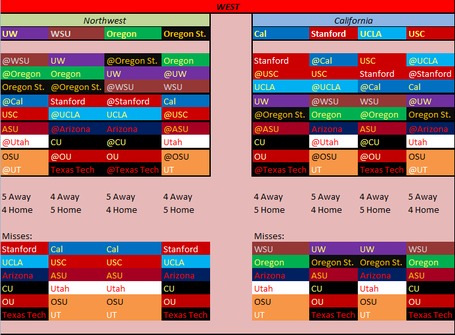 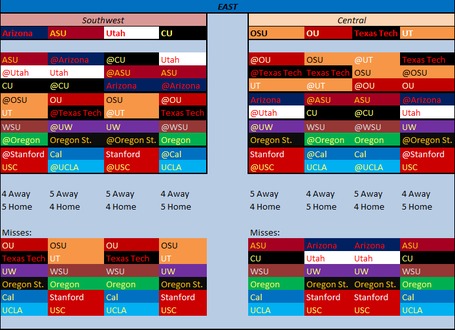 In the third year of the conference, the schedules change dramatically.  Whatever teams you played in the year prior, you play it's travel partner this season.  This goes for both conference and cross-conference opponents.  There's a nice quirk, though, to setting up the schedule this way.  By the end of this season, you will have played all four teams from any given division and will have played a home-and-away with at least one of each pair of travel partners from across the league.  For example, Washington plays Arizona and ASU at home in 2012 and 2014, but plays at Arizona in 2013.  UT plays Wazzu and UW at home in 2013 and 2014, but travels to Pullman in 2012.  Whatever team a given school does play, though, the alternating home/away scheduling continues with those schools with four home league games in 2013 given five league games in 2014.

Finally, the fourth year of the 16-team conference: 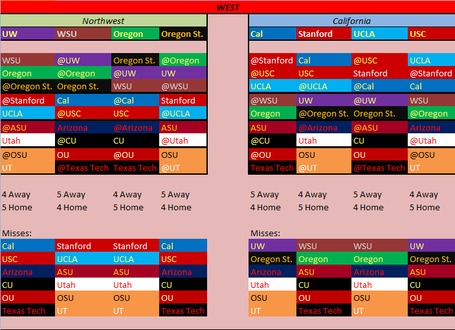 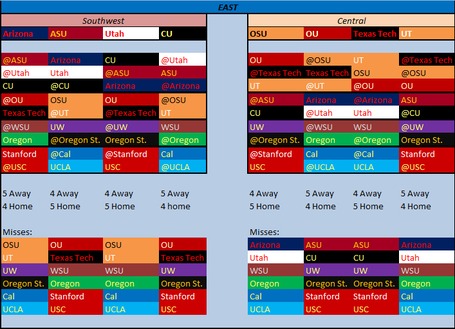 This is the final year of the scheduling rotation.  By the end of this season, every team will have played every team in the league home-and-away.  In addition, the scheduling of alternating the number of league home games continues, ensuring a fair and equitable scheduling mentality when it comes to home and away games.

As you see, travel issues are minimized in this type of schedule.  Schools in the Central division only travel to the Northwest division once a year.  However, at the end of four years, all four Central schools will have visited all four Northwest schools and vice versa.  The same type of relationship goes for every relationship between all four divisions.

Another thing that I made sure to do, given the historical records of the schools, no school other than the Central division schools will play both UT and OU in the same year.  It also helps appease those fans who might be turned off by having to play both Texas Tech and Oklahoma State in the same year.  This doesn't mean,for example, that USC fans will be spared a visit to Stillwater, but rather that they only need to visit Stillwater once every four years.

Does this please everyone?  Probably not, especially Pac-8 fans.  But those Pac-8 fans also have to remember that they didn't start playing all seven of the other Pac-8 members until 2006 when the conference went to a nine-game round robin schedule.  USC didn't even play Wazzu for years, and when they did, they forced the game in Spokane as opposed to Pullman.

As I said, this is only a theorized schedule meant to visually show who plays who in a 16-game pod-based conference.  Will this be the way that a 16- team conference is set up?  Probably not.  But it's good to see what it is that everyone is talking about when they talk about the 3-2-2-2 pod schedule.