Eventually, a scheme evolves from its original incarnation; defenses eventually catch up . The zone-read was the chosen play for Oregon when Chip Kelly arrived as an offensive coordinator. But after a few years, Kelly started adding things, adapting the passing tree, the screen game, and more running options (the triple option, the speed option, the midline read, and most recently the wishbone) to give the offense greater versatility running read-and-react. 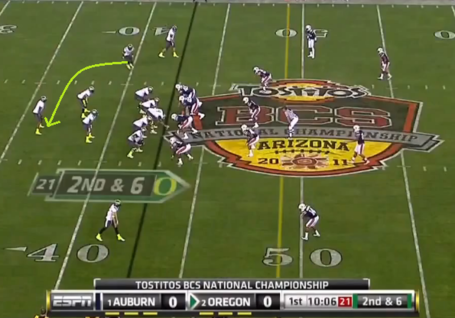 This decreases the options pre-snap for the defense to think about, at least at first glance. We'll explore why more can come of it at the end of this post. 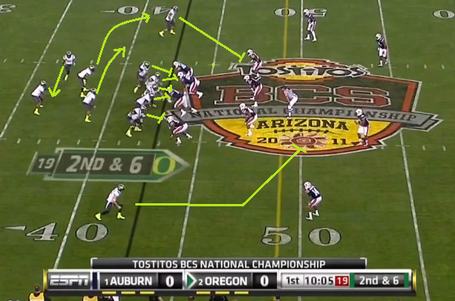 Most of the linemen will block downfield while one defender is left unblocked from the edge. Typical zone read stuff. All the motion and new formations are not typical though.

The defensive end seems to keen in on the running back Kenjon Barner, seemingly sweeping to go outside. Thomas doesn't hand off the ball to the tailback, instead withdrawing it to try and get better options. 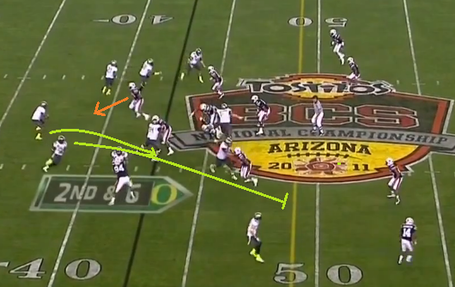 Unfortunately the defensive end is good at being unblocked and recovers to get after Thomas. Thomas is forced to go the opposite direction to avoid original contact, eventually getting buried by Auburn jerseys.

You can see Oregon has multiple options on these plays. Either the quarterback will hand the ball off to the running back if the defensive end crashes toward the quarterback (or plays contain between both of them), or he can keep the ball and wheel toward the weakside of the play. That forces the defense to watch every part of the field and make sure that everyone stays committed to their assignments.

Then the quarterback has additional options once he wheels. He can keep the ball, get blocks from his two backfield mates, and get as far down the sideline as possible (an option we didn't see Thomas take in the title game but could see take tonight). Or he can roll out as a traditional passer and lay the ball in to one of those two players (RB playing short or TE playing deeper) leading for him. If all goes according to plan, there should be a numerical advantage on that side of the field--thus a positive play should result when things are executed right.

You can see an example of a positive Oregon passing play here by the QB rolling out with the ball by looking at the images below. The play is similar to the original (outside zone blocking by the O-linemen to give Barner space to operate), with only the lead blocking TE will knock the DB off his coverage, giving LaMichael James enough space to catch that ball on a very short out route. 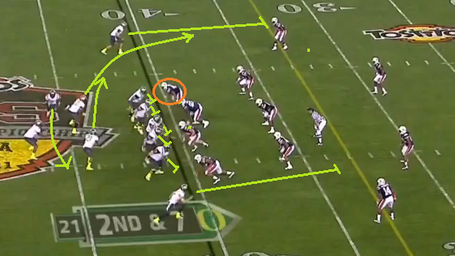 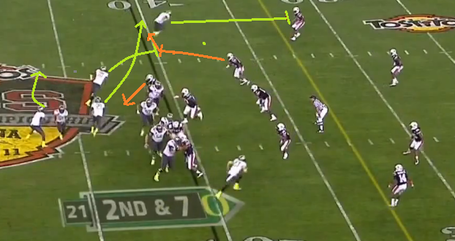 Here are more examples (plus the ones listed above).

Like most Oregon plays, they are not designed to be big hit plays--at most they'll usually accomplish a modest 10-15 yard gain, with an occasional huge burst coming off the brilliance of the playmaker. It's hard to guard, but super-intense. And the possibilities with two Oregon backfield RBs and a blocking TE could really give the Ducks the options they need.

The Oregon offense is an amalgamation of many different types of offensive plays and formations, and all of them will be on display in their heavyweight tilt against LSU. But fans who are thinking that the Ducks have peaked, Kelly will constantly innovate to make sure the Ducks roll forward. While Oregon's current offense might eventually slow down, stagnation is still far away.