Jeff Tedford made Cal care about football again, and for that Golden Bear nation should be forever grateful.

He never gave up on us.

That was the thing that touched me the most about the final days of the Jeff Tedford era. Even until the last, he was fighting to keep his job, fighting to work and improve the Bears. There was a chance he knew he was gone, but that didn't stop him from trying to thwart the possibility.

In the past he had found answers, or at least solutions that at least partially fixed our weaknesses. This time there were none. Whether it be via bad luck or bad management, the solutions just weren't there as they had been before.

But Tedford didn't want out, and he sure didn't check out. He wanted to fix this. As he has almost every season, he worked himself to the bone once again.

It's the thing I'll always admire about Tedford. His incredible work ethic, his attention to detail, his desire to get everything done with the hours he had was all incredibly remarkable, even if the methods and the strategy and the leadership weren't quite there anymore. And it seems he fought until the last to keep his job at Cal and get a chance to make things right.

When I came to Cal as a frosh in 2004, I didn't know anything about the Golden Bears or Pac-10 football. I grew up an NFL brat with a passing interest in college football. I came to Cal because I wanted to get a good education, meet cool and interesting people, and to meet William Hung. I sure didn't have opening week against Air Force pencilled into the schedule as appointment viewing.

I knew nothing about the football program going into my first game. It sure wasn't advertised. I think the first time I knew that Cal might be a good team was in passing from a tour guide.

"Hey, did you know the Bears have a top-20 team this year?"
"What, in swimming?" (The only Bear I knew about coming in was Natalie Coughlin.)

All the hardship eventually paid off for him. His dedication to his football tactics made him one of the smartest minds in the game. As offensive coordinator at Oregon, he always had the Ducks ahead of almost everyone else, and for much of his early days at Cal, he kept on putting defense on his heels. Once his offense started humming for even a second, the opponent was in trouble, regardless of their ranking or their talent.

And for a long time, Tedford was the smartest coach in the room, the master tactician who picked up apart team after team with excellent gameplans meant to exploit weaknesses and tendencies. Cal first quarters became a thing of legend; the Bears would pile on two score leads early and go into cruise control much of the rest of the game. The Bears would run the football down team's throats, then open up things with play action and deep strikes. Cal went from power to skill to speed during his tenure, and during the early years he was able to win consistently with each method. 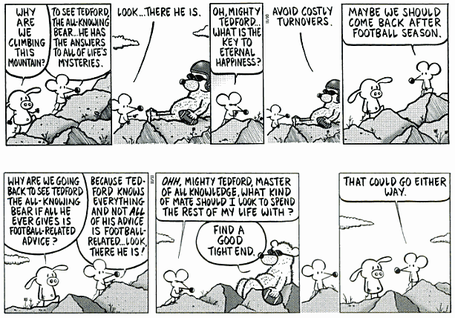 I saw it up close in 2004 and 2006. The Bears thrived. They didn't lose a single home game. They shut down opponents and plowed them offensively. It was great, methodical success that forced the rest of the conference to play catch-up for over half-a-decade.

No team gave USC more difficulty year to year from 2002-2008, and Pete Carroll has always stated that the Bears were the toughest team he had to prepare for week to week. Tedford went toe-to-toe with Oregon every year and generally got the better of his mentor Bellotti. Tedford made Dennis Erickson, Rick Neuheisel and Ty Willingham his personal punching bags, and outlasted coaching change after coaching change at every other Pac-12 institution.

And he owned Stanfurd. Absolutely owned them. He buried a seven year losing streak with seven wins of his own. Cal got up to keep the Axe almost every year, and despite the ups and downs of the season, Tedford always had us ready to beat up our rivals.

And yes, it seems the cycle has turned on him. Whether it be the physical nature of the Furd, the up-tempo spread and shred of the Ducks, the overall talent of the Trojans, the better in-game management of the Beavers or even dealing with a mirror offensive mind in UDub, other coaches are getting the better of him. Tedford is no longer able to outcoach the rest of the Pac-12, whether it be a function of age or routine or accumulated gamefilm or what not. Time is the worst enemy in college football, and for an offensive-minded coach like Tedford, it appears the rest of the conference finally caught up to him on gameday.

There might be external factors, like discipline, questionable decision-making, lack of accountability, and perhaps overall stubbornness that might have worn down the morale of the players on each successive team, but for a long time Tedford was able to hold the fort there, with things only caving in this season. Tedford provided Cal a template for what winning football could be like, and I imagine he was as disappointed as the rest of us by the results that sprouted on the field.

And he shouldn't be disappointed. Outside of a Rose Bowl, he gave us almost everything we could possibly want, from modern facilities to build a modern program, to amazing professionals that'll make us proud on Sundays, to all the great moments his leadership has created that'll ensure his legacy endures. He has set a high benchmark for the next leader of the program to meet, and thanks to his sacrifices and vision we should have the ability to meet it.

Winning in college football is difficult, and winning at Cal has been historically impossible. For Tedford to do it for eight years, to win 67 of his first 100 games as Cal's head coach, to finish as a top-four Pac-12 team six of seven years sets a pretty high standard for the next coach to meet. Cal nation will be expecting the Bears to meet the Tedford standard rather than just hope for a winning season every now and then.

When it comes to Cal football, Jeff Tedford is all I've ever known. That makes me incredibly more fortunate than those who are well-acquainted with the likes of Holmoe and Gilbertson and Theder. I probably experienced as much joy in one season of watching the Golden Bears than many Cal fans have experienced in a decade before him. That means something to me, and it always will.

Most importantly, he showed us Cal can build a football program and have the potential to be just as excellent as any of the other institutions at our university that we shine with pride. He thought us to care, just as much as he care. And by the example he set through his own perseverance, he hopefully taught us not to give up the Bears.

Thanks Coach. For everything.