The worst way to determine a national champion definitely deserves the worst officials available. What to expect from Pac-12 refs in the BCS title game between Notre Dame and Alabama. 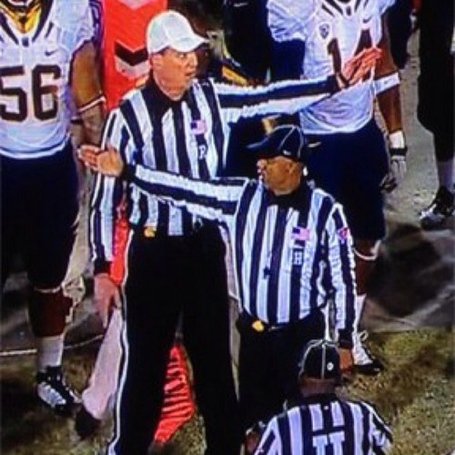 Here are things we can all expect from the national championship game now.

There will be a five minute stoppage after an inconsequential review to determine whether it should be 2nd and 10 or 2nd and 9. Then they'll take another five minutes to figure out how much time should be on the clock.

Notre Dame and Alabama will combine for seven turnovers that will all be incorrectly assessed on the field.

A.J. McCarron will throw a fade route that has a -5% chance of getting caught. It will be whistled for pass interference.

If it's Glasses Ref, he will be trending on Twitter in about three minutes. Next trending term will also be Glasses Ref, likely connected by a four-letter word.

Somehow, Mike Stoops will find his way on the sideline and start yelling at everyone in sight.

There will be a drive during this game that will feature more flags than plays. You think it's impossible, but Pac-12 refs do things that can be construed as mystical and legendary, somewhat like the palaces of Rivendell.

Notre Dame will attempt to throw the football to places. They will get pass interference penalties out of sheer effort at being able to throw a forward pass, as Irish football is still trapped somewhere in 1940 and benefiting from the merits of scheduling the easiest major conference in half their games.

Almost every score in this game (there will probably be one, maybe two if they're lucky) will ultimately end with the radio call "TOUCHDOWN STANFORD!"

There will be one controversial call that Alabama or Notre Dame fans will harp on all season as costing them their chance at a title. Don't really know what it is (probably an incomplete pass, probably a totally incorrect interpretation of the rules), but it's going to be awful.

If it's Shawn Hochuli (and it should be, as Biceps Junior mans the only semi-competent crew in this conference), then expect excellent explanations of all these terrible calls. He will make this High School Musical production look like West Side Story for a few minutes here and there. Anyone else means we're going to be watching the equivalent of a Glee rerun.

So there you go. A corrupt and rotten national championship system gets exactly the coverage it deserves--the worst major officiating crew in college football managing and deciding who gets to be a champion.

It'd be the irony of ironies if it took a non-Pac-12 game for Larry Scott to recognize how subpar his officiating crews are and force him to finally make drastic changes to his officiating staff. Can't see what else will at this point.