Do you agree with the seedings?

Here are your seedings.


1. David Shaw, Stanford. When you’re the two-time defending Pac-12 champion, you kind of earn the one seed by default. But there’s no doubt Shaw has proven that he’s a heck of a football coach. Now he has the Cardinal poised for bigger competition.

2. Jim Mora, UCLA: Mora had a slight down year due to a difficult schedule and some turn over at key positions, but the Bruins have wrecked the recruiting trail and are poised for a huge 2014 campaign. Mora and UCLA could be poised for some big years ahead in the Pac-12 South.

3. Todd Graham, ASU: Graham has proven he can coach. He took Dennis Erickson’s underachieving Sun Devils and made them Pac-12 South champions in two years. Arizona State has been unbeatable at home and just a tough out on any given weekend.

4. Mark Helfrich, Oregon: The Ducks had a solid first year under Helfrich, but there are big question marks as to whether the former offensive coordinator can fit into Chip Kelly’s (admittedly) big shoes. A lot has to be decided here.

5. Chris Petersen, Washington: Now, Petersen hasn’t coached yet in the Pac-12, so it’s hard to say how exactly he’ll do, but he is definitely coming in with a loaded resume. He made two BCS bowls in Boise State and went 92-12. If that isn’t a victory, I don’t know what is.

6. Steve Sarkisian, USC: Sarkisian did all he could at Washington and resurrected a Husky program that was dead in the water. Now he gets to come back to Los Angeles to try and prove that he can coach up the best talent in the nation and bring the Trojans back to national prominence.

7. Rich Rodriguez, Arizona: The Wildcats are starting to sense their massive offensive potential under Rich-Rod. The Wildcats have authored some huge scoring performances and you have to imagine that more are coming down the line.

8. Mike Riley, Oregon State: Riley has the Beavers back to winning on a regular basis, although they did fall a step behind their excellent 2012 campaign. Riley has become a staple in Corvallis and has proven that his teams can compete with the best of the Pac-12 on any given Saturday.

10. Kyle Whittingham, Utah: At his best, Whittingham did impressive things in the MWC, but the jury is out as to whether he can replicate that success in the Pac-12. His defenses at Utah have been strong, his offenses middling.

11. Mike MacIntyre, Colorado: MacIntyre seemed to bring the Buffs back a little bit with a few modest victories out-of-conference, but he has a long rebuilding process ahead of him in Boulder before a verdict can be rendered.

12. Sonny Dykes, Cal: Dykes obviously has had some decent success at Louisiana Tech, but his first season at Cal was a disaster. He has a lot to prove.

Here's the North side of the bracket: 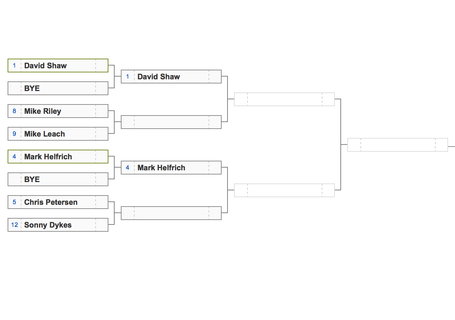 Here's the South side of the bracket:

The individual posts will start popping up tomorrow for you to vote on! Look for the announcements.

Below is your tentative schedule.