For some in the Pac-12, Week 5 was a struggle. For others, it was a series of heart attacks. Either way, there are plenty of plays to analyze from this past slate of games. Let's pick a few.

On Saturday I was at the Cal-Colorado game, and they produced enough plays and defensive miscues to fill a small city block with text. Instead, I'm only going to take three from that game, the game winning score from the Washington State-Utah game, and Brett Hundley's first touchdown pass of the second half.

This was a game where defense was played sparingly, but I want to start with the interception Colorado had on Cal's first offensive possession, seen here. Cal comes out with trips right and a tight end to the left. It's unseen here, but Colorado is showing Cover 2 (two deep zones) at the snap of the ball. Jared Goff makes his only big mistake of the game, and that is assuming that they will stay in a cover 2. On the snap, both corners drop into deep zones, with a safety over the middle playing a deep zone. Goff made the mistake of picking his receiver before the snap, and compounded that mistake by trying for the deep ball instead of throwing it sooner on a lower trajectory in the gap between the linebacker and safety zones. It was excellent playcalling by the Colorado defensive coordinator, and it was the same mistake Goff made against Northwestern in 2013.

Goff did have perhaps his greatest game in Yale blue and gold for now, throwing a beautiful pass across his body to Stephen Anderson, seen here. Goff and Anderson connected multiple times throughout the day on numerous eight yard "sit" routes, where he came from the tight end spot, turned around in between the Colorado zones, caught the pass, and fell backwards for 9-11 yards a piece. The Bears line up in that same trips formation as earlier with Anderson at the tight end. Anderson runs a "fan" route, which is where the receiver begins to run a cross, plants his inside foot, pivots out and breaks to the outside. They send the outside receiver on a hitch, the other two receivers on the right on shallow crosses, and Daniel Lasco on a bench route out of the backfield. This part is where Goff will inevitably earn his money. Colorado jumps on these short routes, taking away Goff's quick options. When the pocket begins to collapse, Goff has to scramble, and Anderson breaks off his route and heads upfield, keeping up laterally with Goff. Goff makes an unbelievable throw and Anderson takes it from there, in one of the better displays of Berkeley improv in a good while.

It would be disingenuous to talk about this game without showing a bit of the performances of Sefo Liufau and Nelson Spruce. The Cal defense struggled to defend any number of out routes that Liufau threw, and Spruce victimized Cal corners. Take the play that caused a second overtime and almost killed the buzz in Memorial Stadium. First and 10 came up for the Buffs, who lined up with three wide, two to the right and one left. Cal comes out in its nickel package, and rushes five. This leaves single coverage on the outside, leaving Spruce on Cam Walker. Liufau throws the fade, Spruce goes and gets it, and the Cal fans who have to use the restroom squirm a little longer in their seats. These two played an incredible game, and their offensive contributions were not lost on me.

During the actual game, I only saw the first quarter of this matchup, and I figured that Utah was headed to 4-0 after another Kaelin Clay return and Washington State's turnover problems. But Washington State can throw above else, and if somebody slips, it could be off to the races for the Cougars. That was the case for Vince Mayle's 81 yard touchdown reception, seen here. Wazzu comes out with four wide, outside receivers off the line. Utah bluffs a blitz with their outside linebacker, and this keeps him from dropping into a zone to stop the slant. This play has inevitably been practiced hundreds of times, and Connor Halliday puts it right in stride as the Utah corner falls. That would have probably gone for six anyway, as the safety takes a terrible angle to try to make the tackle. It was a great read to counter the defense and gave the Cougars an excellent win.

This play is the moment where UCLA showed their propensity to turn it on. They start with four wide, putting a man in motion from the right side to the left side. They run a deep passing play, running go routes on the outside and a cross with the two slot guys, running a skinny post under a corner. 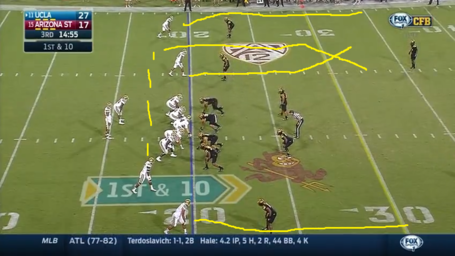 Jordan Payton burns his defender like a battle rapper at an elementary school. The corner even gets called for a hold and fails to stop him. Hundley notices this right away and puts a perfect pass in stride for Payton in the huge hole that he's stationed in between the corner and the safety. 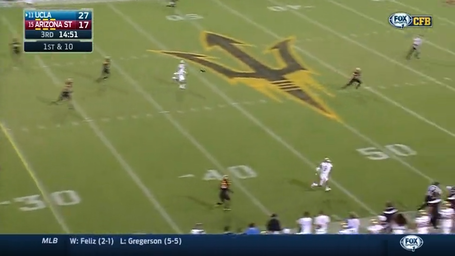 Seeing this pass on replay made me believe that Brett Hundley can live up to his Heisman hype, as this throw was a thing of beauty.

Considering the offensive weaponry in the Pac-12, there can and will be more plays of this caliber to look at and see what went right or wrong in the near future.