USC at Stanford: An early marquee Pac-12 offensive matchup of Trees and Trojans

Stanford and USC have played some tight games over the past seven years. Let's go over some tape and speculate on what each team brings to the table on offense.

Share All sharing options for: USC at Stanford: An early marquee Pac-12 offensive matchup of Trees and Trojans

Gone are the halcyon days of Pete Carroll and Jim Harbaugh and their USC and Stanford teams. They've moved on to higher grounds, but the teams still have kept that hard nosed rivalry. The past four years of matchups have come down to essentially the last play, and these teams have built up an acrimonious relationship that has spread to their coaches. Steve Sarkisian and David Shaw aren't exactly fond of each other, after Sark accused Stanford of faking injuries against Washington (the irony being that Sark hired Tosh Lupoi) and Shaw put a bouillon cube in Sark's shower head. Aside from their differences as coaches, they each have drastically different offenses with loads of talent on defense. USC under Sark is running tempo, and the 104 plays they ran on offense in the opener was the most in Pac-12 history. Stanford, on the other hand, sports a pro style running attack. It's a slower system that can get the job done, and with some speed on the outside in Ty Montgomery, Stanford can be a bit more dangerous with the deep ball. Let's see how their offenses worked in week one

The new Sarkisian-led offense asserted itself last Saturday on the first drive. It ended up as a 17 play drive that covered 90 yards. They ran the majority of plays out of the shotgun, with only two coming from under center. Both plays were play action passes and both were incomplete. Every other play had all the hallmarks of an uptempo offense designed to wear down defenses. They ran five quick passes to get their athletes out in space. USC has always been and will continue to be one of the best at recruiting athletic receivers and running backs, and that showed early on. Even though these quick screens to the sideline only got three or four yards a pop, they keep the defense out on the field for longer. Here's a shot of bubble screen to Buck Allen. 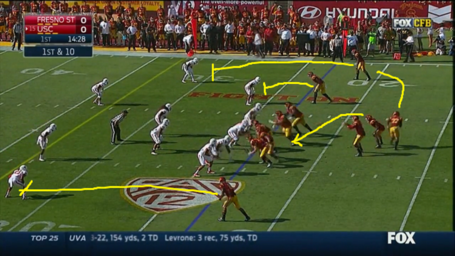 They fake the zone play, which had just gotten them a large gain, motion Allen out of the backfield, and swing it out to him for a three or four yard game. Seeing this look with motion out of the backfield can cause the defense to cheat up to anticipate another bubble screen, in which case Cody Kessler can look forward to Nelson Agholor and George Farmer having a step on their defenders.

With goal to go, USC picked up the pace, running two quick zone read plays which resulted in a touchdown keeper by Kessler. The pace helps on short down situations like this, as it's near impossible to stop a runner for no gain with players still unsettled.

USC's offense continued to run quick hitting plays, eventually leading to the Fresno State safety playing a little too far up and taking a bad angle to tackle Juju Allen on the screen. The freshman wideout gets loose because of this and takes it for a long gain of 53 yards. The highlighted corner in the screenshot takes a bad angle as well, and he could have stopped the gain at five yards if he hadn't. 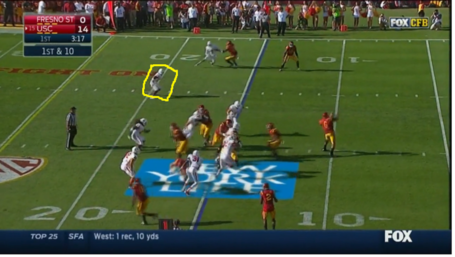 Luckily for Stanford, they match up extraordinarily well with these fast paced teams. Their recent hold over Oregon shows that. Their 3-4 defense is designed to be flexible, and if their pass rush is as good as in years past, it could disrupt Kessler's rhythm, and all the speed on the outside doesn't mean a thing if a quarterback can't get it out there. All things considered, this defense didn't allow UC Davis past midfield until the final drive of the game. If that momentum carries over, USC needs to be on their A-game. Or at least a B plus game with some grade inflation.

As a Cal graduate and fan, it truly pains me to say this. But I like Stanford's offense. Their pro-style system, which may have produced one of the best NFL quarterbacks for the next ten years in Andrew Luck, flies against the trend of spread offenses being the norm. And aside from fullback dives against Michigan State on 4th and 1, it works. Let's break it down with a couple shots from their game against perennial Big Sky power UC Davis.

First, the Cardinal have an excellent receiver/return man in Ty Montgomery. He returned the first punt for a touchdown almost effortlessly. He is, in my mind, the most dangerous threat on the Stanford offense. Getting him open deep on play action off of a power is one thing this offense runs well, and expect to see that happen a handful of times this year.

In order to have play action pass of that magnitude, you have to run the ball and the Cardinal run very well. Diagrammed below is a power that the Cardinal ran on their first offensive play. All the lineman except the right tackle blocked the man in front of them. The tackle pulled to serve as another lead blocker for the running back. I assume that the Stanford offensive line pulls their lineman based on alignment, so a tackle pulling isn't too out of the ordinary. They will run traditional powers as well, with a guard pull serving the same purpose. 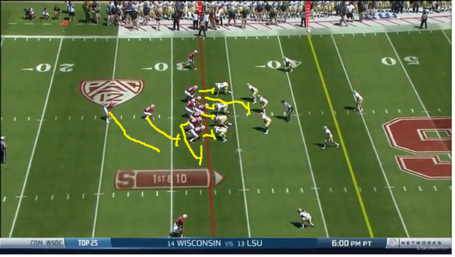 Another developing piece of the Palo Alto pie is the passing game. Kevin Hogan will never be Andrew Luck without some sort of Freaky Friday experience. He is a very good quarterback who is afforded lots of time in the pocket by a talented offensive line, and this helps Stanford's intermediate passing game. Below is one route combination they are running against the Davis Cover 2. Immediately at the snap, the safeties read pass and drop into their two deep zone. The single receiver to the left runs a fade route, which draws a corner and a safety. The inside man on the right runs a deep curl, which takes two linebacker away to cover him. The middle receiver runs an out, taking a linebacker and the corner with him. This leaves a hole between the cornerback and safety for Hogan to hit Montgomery for a first down. This is to be expected with a line this talented. 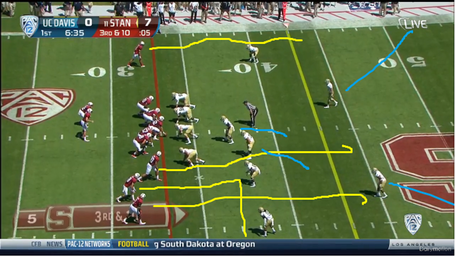 What USC has to do to stop this is to emulate Michigan State's game plan from the Rose Bowl. Disguise coverages, rush the passer well, play eight in the box to dare them to throw, and make sure Ty Montgomery doesn't play for a while. It's a tall order for anyone, but USC held down a decent Fresno State team to 317 yards of offense and got four interceptions. If they come out with the same sort of opportunistic defense, then it's anybody's game.