Share All sharing options for: UCLA Football: Brett Hundley Was Dared To Run In Holiday Bowl

After watching several of the PAC-12 renditions of the spread options, it becomes apparent that there are distinct methods for defending the effective zone read play. A majority of teams choose to defend the play, "straight up," and teams like Oregon have usually made quick work of them. Other teams find unique schemes, such as the Cover 0, irregular alignments, or most recently the bear front to combat the zone blocking schemes.

However, I have never seen a scheme as straight forward, and as effective as Baylor's in the Holiday Bowl. And it isn't as if Kirby Smart or Nick Saban are the defensive coordinators in Waco; the Bears are ranked 119th in the country in total defense, and 111th in scoring defense. As surprising as it might seem, Baylor's defense successfully out-schemed UCLA's offense, who boasted one of the nation's best running backs in Johnathan Franklin.

UCLA's head coach Jim Mora admitted in his post game conference that UCLA's offense opens up with the run. If Franklin can't do anything to open up the defense, the rest of the offense really isn't that effective. Taking that into account, Baylor's scheme was simple: dare Brett Hundley to keep the ball on running situations, then blitz as many players as possible on third down. 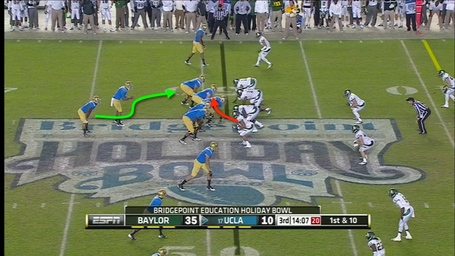 In the image above, UCLA is running a typical inside zone play to the left. Hundley will be reading the defensive end who is in a two point stance. That defensive end will crash down on the play (as indicated by the red arrow), selling out on stopping the running back, and leaving the backside of the defense unoccupied. 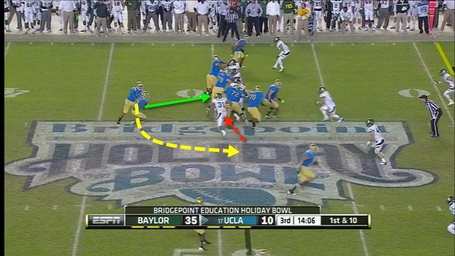 At the mesh point in the image above, it becomes obvious that the defensive end is crashing down to stop the running back, and that Hundley should pull the ball immediately and run upfield. 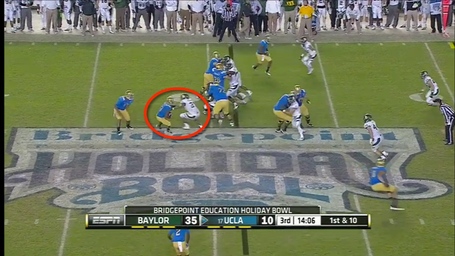 Alas, Hundley does not pull the ball, leaving the unblocked defensive end free to tackle the running back. Basically every time UCLA called the inside zone play, Baylor's unblocked defensive player either made the tackle on the ball carrier, or would influence the path of the ballcarrier in some way. 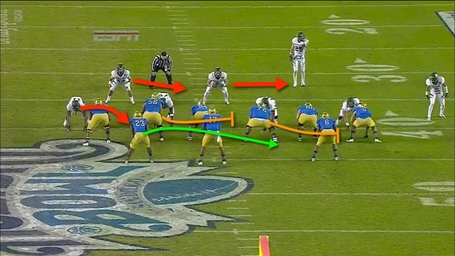 The same thing happened when UCLA ran its sweep play. As shown in the image above, Baylor's defense crashed to the running back's path aggressively whenever they anticipated a run. From our perspective, the left-most defensive lineman will crash hard to our right, once again leaving the backside of the defense open for Hundley to run. 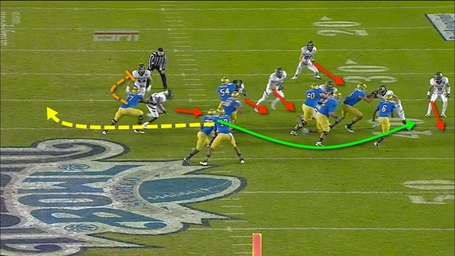 At the mesh point, we can see that Baylor's defense has sent plenty of defenders to cut off the running back, while the UCLA blockers are left undermanned to make a wall for Franklin on the outside. If Hundley keeps the ball, he would have a block set up for him, and plenty of room to run on the outside. 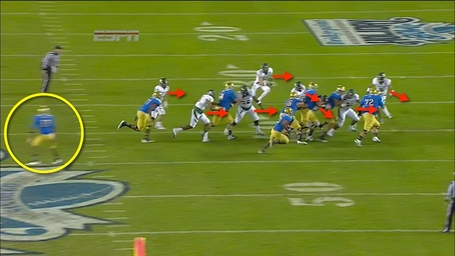 Hundley misses his read again, and Franklin is left with nowhere to run on the outside. Of course, Hundley is left standing all alone on the outside as shown by the yellow circle in the image above.

After studying Mazzone's offense for a year, it is no secret that UCLA, along with other spread option teams such as Oregon, have preset calls that force the quarterback to give the ball to the running back in certain situations, regardless of what the defense is doing. However, upon reviewing the game, it is obvious to see that Baylor repeatedly dared Hundley to keep the ball throughout the entire game, and ended up routinely bottling up the UCLA running backs in the backfield. Mazzone did not adjust, or call a play to let Hundley keep the defense honest at the very least.

When the running game failed, Baylor used conservative pass coverages on early downs. The UCLA passing corps ended up having a less than impressive showing in those situations throughout the game, forcing Hundley into long third down scenarios. Baylor responded by bringing seven, or eight pass rushers like clockwork on third down, often forcing Hundley either into the turf or flinging the ball up for grabs.

My better judgement still tells me that UCLA wouldn't have won this game, but if Hundley keeps the ball in just a handful of those early situations, Baylor would be forced out of their rudimentary tactic, allowing UCLA to work normally against a previously porous defense, perhaps keeping the Bruins in the game.